Lincolnshire, my home county in the UK, whilst full of rural and agricultural beauty, is one of the most undeveloped areas in Britain. One forward-thinking Lincolnshire-based company has defied it’s milieu with progressive thinking: InkFactory have experimented with 3D printing 2D printer cartridges. However, the PR outcomes from their experiment may be far greater than the fruition of their R&D. Why? Here follows a tale of what they appear to have overlooked and gotten wrong…

YouTube posts can be insightful. They can also be a platform for sensationalism, naturally: What better way to attract he attention of an audience than with video*.

3ders, who I’d personally (my opinion, not that of 3DPI) recommend for quick scoops but not always depth of research whilst they seek to get the news out first, report that in June InkFactory purchased a MakerBot Replicator 2 desktop 3D printer for the project. They then chose Kodak 30C and 30B ink cartridges.

InkFactory, who post refills for £10, are future proofing their business. They may, I speculate, also be seeking to undermine the business model of their significantly larger rival Cartridge World, who have some 1200 outlets and deal with custom on an over the counter basis.

Currently, incorporating the chip, and other aspects of the toner cartridge, was not within the technical ability of InkFactory thus certainly would not be a general technical skill available to a mass market, if and when home 3D printers become widespread.

3D printing original 2D cartridges to perpetuate the use of obsolete 2D printer models may be one viable application, I simply wonder… why? Especially in the face of new combined printer+scanner WIFI, Bluetooth enabled wonders that frequent the desktops of users in 2013.

Retro 2D printing is something I have come not come across, except for rare and interesting Maker projects such as the phenomenal hacking of a 2D printer to a 3D bioprinter over at instructables.com. 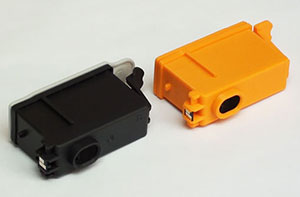 The premise of the experiment, which surely should be applauded for enterprise and endeavor, smacks of wisely thought conceptual company strategy to seek to undermine the logistics of another, but, perhaps, based upon a little naivity thanks to mass media 3DP sensationalism regarding the capacity of FFF at home.

Indeed, inaccuracy is another point here. The more variables that may go astray within a process the less the output efficiency over a long enough time span: The Replicator 2 is a great little printer. But, like most prosumer 3DP’s it has hiccups. An undetected hiccup in the print of your 2D cartridge may mean a technicolor 2D printer. Or some sparks.

*As accuracy is the onus of this article: ‘movie’ is a far more accurate term—’video’ is a term directly etymologically derived from Latin: ‘I see,’ encompassing all vision. Movie, by little stretch of the imagination, is a term inferring movement. Movement being the novelty in 1930’s cinema.