CoCoRo: A Swarm of 3D Printed Robots to Safeguard the Oceans

The Collective Cognitive Robots (CoCoRo) are a group of 40 mini-submarine robots that can work together to perform complex tasks. They are based on the concept of “swarm robotics”, which says that a group of simple “little robots” – capable of working together – are able to carry out more complex tasks – and at much lower costs – than a single, very advanced robot. 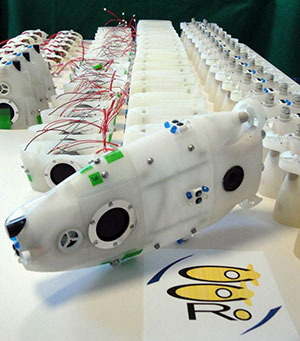 The CoCoRo project has received funding of 3 million euros over a period of three years and is now is entering its closing phase, with final tests to be held in September 2014. A total of five European universities were involved with different roles.The University of Graz in Austria acts as a coordinator between the University of Stuttgart, the University of York, the University of Brussels and the Scuola Superiore Sant’Anna University of Pisa. Each institution carried out different tasks, but the actual building of the robot prototypes and final use robots was carried out by the Tuscan institute, which is at the forefront of robotics studies with is Department of Biorobotics.

The robots made ​​by the University of Pisa are about 25 cm long and, when it comes to building a limited number of small, relatively complex, objects, regular readers of 3dprinitnginindustry.com will probably recognise that this is a prime application for 3D printing. And the guys at the University of Pisa know it as well, because that is exactly what they used to fulfil the job.

“We have been using 3D printers for several years and we also have some that are owned by the University,” says Stevano Mintchev, one of the engineers involved in the project. His exact area of expertise is bioinspired robotic structures, that is robots that try to replicate animals and living organisms in general in their shape and function. Mintchev’s group is looking specifically at “social” animals, who live and coordinate their actions as groups, such as bees and fish.

The CoCoRo project is a major step forward in the field of “swarm robotics” for several reasons. First, it is the largest robotic swarm ever made. In the past, the study of the marine ecosystem was based on single UAV’s (Underwater Autonomous Vehicle), which are very expensive, difficult to build and not very efficient. Today, through 3D printing, small robots can be built at much lower costs. Collaborating in groups, these robots are more efficient, especially under water.

“It is a totally different approach – Mintchev explains – because swarm robots react in a much more ‘robust’ manner to complex and variable situations such as those that they would encounter underwater. For example identifying an object or a source of submarine pollution. A single robot would be hard pressed to explore a large space and follow the track to the source, while a group of robots can much more easily follow tracks that are non-linear and in constant motion.”

To perform all these tasks each robot is equipped with sensors that help it navigate and perceive their surroundings – such as the presence of light or changes in temperature – moving in three dimensions thanks to a system of propellers and an artificial swim bladder that regulates its buoyancy. To effectively communicate with other robots each member of CoCoRo is equipped with three communication systems. The first is based on the propagation of sound; the second is based on a system of blue LED lights, because the light of this colour propagates in water over greater distances, without weakening. The third approach is the most bioinspired, as it simulates the bioelectric field that some types of fish – called weakly electric fish – use to communicate with each other.

Much like 3D printing, and thanks to 3D printing, robotics is evolving at an incredible pace. After all 3D printers are robots too. In my own personal view, they are “mother-robots”, as they can create other objects not just modify them. And much like 3D printing the curve of possible robot technology evolution is virtually infinite. One can only begin to imagine what robotic swarms they will be able to build as soon as the electronics and sensors can be embedded during the printing process.