UPDATE: 123D was discontinued in 2017, therefore links to the Autodesk 123D may no longer function.

Autodesk may be helping its partner Makerbot in the advancement of 3D printing in education through the release of a series of new models on the Autodesk 123D site. The CAD / software developer has just released some very detailed models of Chinese spacecraft to complement the recent developments in Chinese space travel that could further the interest kids already have in space. 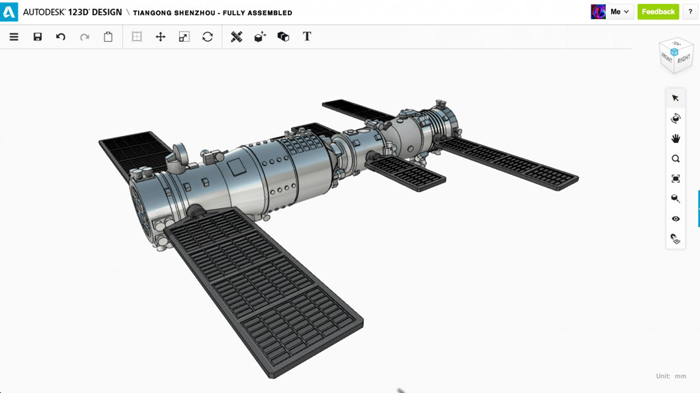 Now at Autodesk’s 123D, you’ll find 3D-printable models of both the Chang’e Moon lander and Yutu Moon rover, as well as the Tiangong 1 space station and the Shenzhou capsule, used to launch astronauts into orbit. They’ve also included 3D models of the Long March 2F rocket used to launch all of them into space. Because the set offers complex, articulated parts that snap together without the use of glue, they’re perfect for getting kids into space exploration, while showing them the different parts of a given spacecraft – solar panels, ramps, rockets, etc.  With each of the models, the site includes a brief description of each spacecraft, such as this outline of the Jade Rabbit (Yutu) rover:

Yutu (Chinese: 玉兔; pinyin: Yùtù; literally “Jade Rabbit”) is an unmanned lunar rover that forms part of the Chinese Chang’e 3 mission to the Moon. It was launched at 17:30 UTC on 1 December 2013, and reached the Moon’s surface on 14 December 2013. The mission marks the first soft landing on the Moon since 1976 and the first rover to operate there since the Soviet Lunokhod 2 ceased operations on 11 May 1973.

Of course, the description doesn’t include the existential ponderings the Jade Rabbit had as it heard its death knell on the Moon.  This would increase the educational component of the models even more so, teaching students that, when it comes to space travel, the US and China alike can put aside their differences – and both nations’ human rights abuses – to ponder humanity’s role in this universe in face of the inevitability of death.

Hat tip to Gian Pablo; thanks for the tip!