When I first heard about 3D Hubs, I thought that, despite its glossy website and sweet logo, it was going to be another informal network of Makers that would help one another 3D print things at a sort of vague attempt at collectivization.  Instead, what it turned out to be was an organized, savvy group of people that was effectively interconnecting 3D printer users throughout the world.  In order to “unlock” further 3D Hubs across the country, the company is going on a US Unlocking Tour and the whole thing makes me feel good inside!

Based in Amsterdam, 3D Hubs has already connected over 2,000 3D printer owners in London, Berlin, Brazil, and the Netherlands.  After opening their New York City office last month, they’re going across the country to throw 3DP parties in (almost[1]) all of the US’s major urban centers: NYC, Seattle, LA, San Francisco, Boston, and Philadelphia.  The parties will consist of eating grub, schmoozing, and some excellent presenters discussing 3D printing as it relates to things like fashion, material science, and sustainability.  We’ve been told that one presenter will be the CEO of Made in Space, currently building the first 3D printer to go into orbit. Check out a nice little map of the events below: 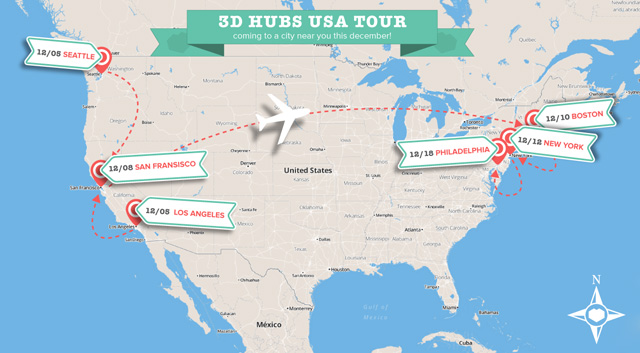 I’m excited at the prospects of a whole world interconnected through 3D printing.  As the machines are currently a bit scarce, not yet having saturated the mainstream, local 3D printer hubs will be a great way to connect strangers located in the same neighborhood.  Ultimately, when there’s a 3D printer around every corner, manufacturing goods locally will decrease the carbon footprint of vehicles transporting stuff around the world.  I think that the 3D Hubs endeavor has “good” written all over it.

[1] I say ‘almost’ because they’ve left out my native Chicago! Also, some other important, but less near and dear cities.