Two weeks back, we introduced you to the White House 3D Printed Ornament Challenge, a design contest hosted by Instructables to find 3D printed ornaments to not only hang in the East Wing of the White House for the holidays, but to add to a small collection of White House ornaments in the political history wing of the Smithsonian’s National Museum of American History.  Quite an honor for any 3D designer!  We received a lovely note from one such designer, Leandro Rolon, who is among the twenty finalists in the Instructables contest, which you can now vote for at the DIY site. Leandro writes:

I wanted to thank the whole 3D Printing Industry team, in particular Michael Molitch-Hou for his article and for exposing me to the competition. As of today, my design has been viewed over 2000 times and is one of 20 finalists which may end up on the White House Christmas tree as well as in the Smithsonian!!!

In honor of Leandro and the rest of the finalists in the competition, we wanted to give you a quick run down of all the designs in the contest.  Here they are in the order that they are listed on the contest page (so as not to pay any special favors).

Star of Bliss by Elroyo

Elroyo’s description is an apt one for the season. About their Star of Bliss design, Elroyo writes, “Much like the way it was created, through the mirroring and patterning of a simple line, the Star of Bliss signifies how a small act of kindness can transform and spread to create a wonderful final result. This embodies the spirit of the holidays; how we all need to put hatred aside and pay it forward.” 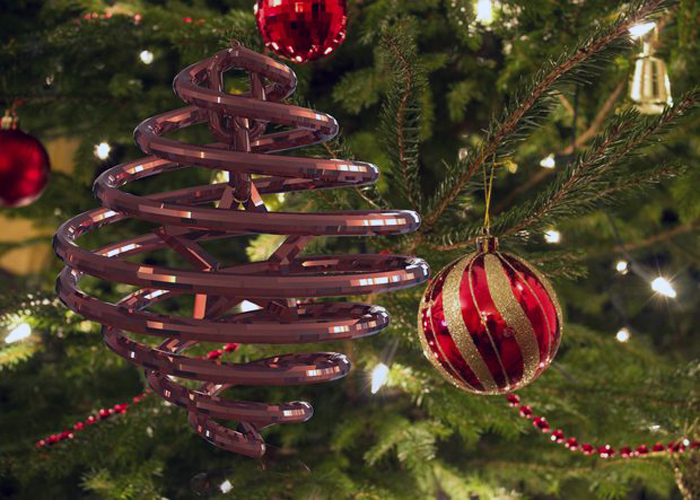 ChrisB6 gives no description of this ornament, so, if I had to guess, this beautiful spiral depicts the dizzying effect of shopping for the holidays, with the star representative of the expansion of the universe driving the whole thing. 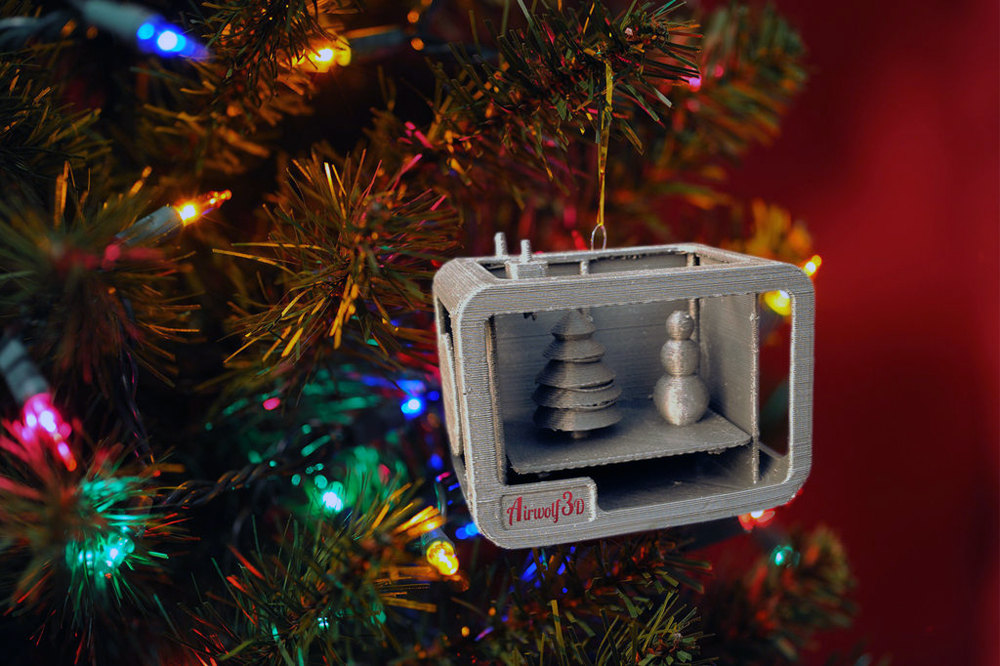 gilrdesign’s ornament is designed, via Zbrush, to meet the specifications of Shapeways’ Frosted Ultra Detail material for that Jack-Frost-snuck-into-your-house-and-touched-your-stuff feel.

The Christmas State of Mind Ornament by Leandro_Rolon 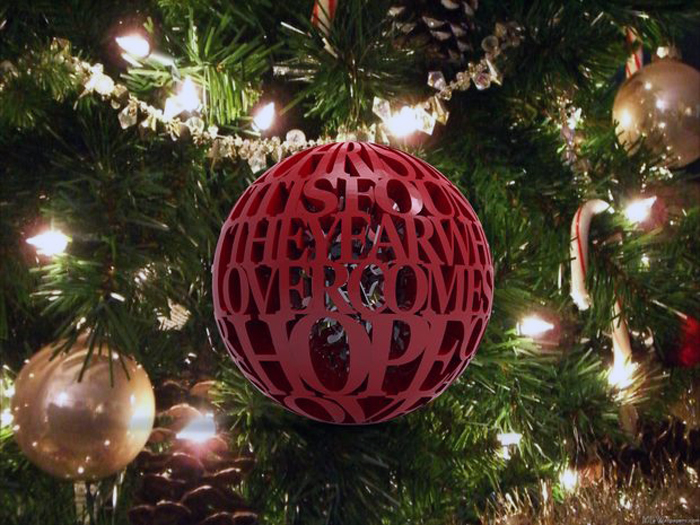 Here’s Leandro’s piece. It has a beautiful look and invokes the words of former President Ronald Reagan(‘s staff writer). It reads, “Christmas is a state of mind. It is found throughout the year whenever faith overcomes doubt, hope conquers despair, and love triumphs over hate.” Leandro created the text in Illustrator, extruded it in Rhino with a Grasshopper plug-in, and wraps it into an ornament shape. Nice work, Leandro!

Hugging Snowmen in a Snow Globe by Blackdog3d 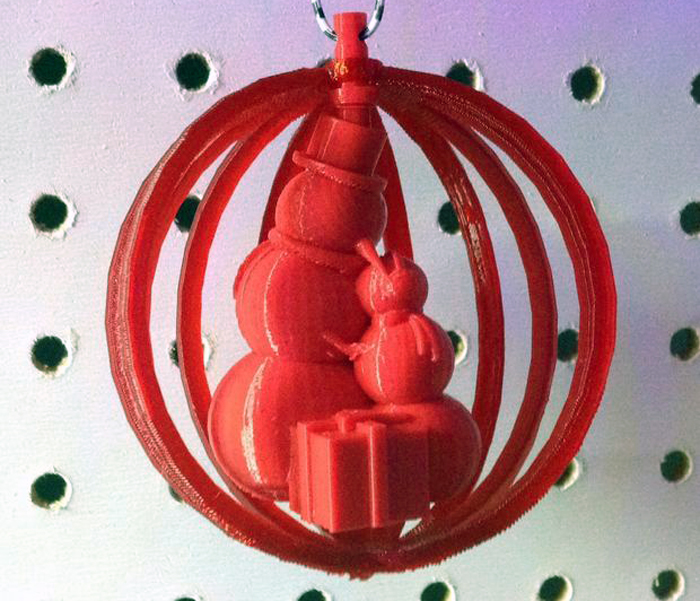 As a parent volunteer for 5th and 6th graders, Blackdog3d wanted to demonstrate to their students how easy it is to design in Tinkercad and print designs. 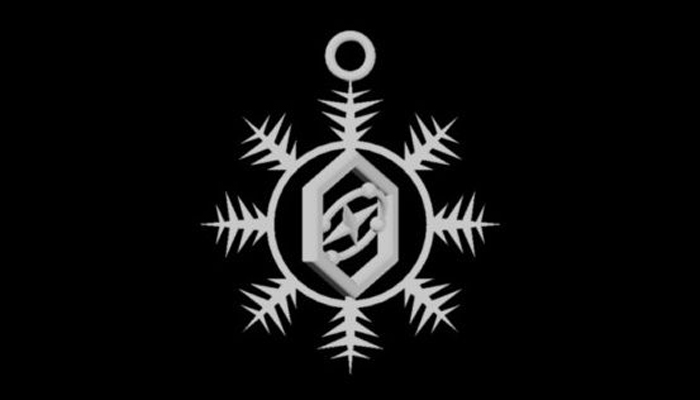 The Gyro Snowflake is meant to show off 3D printing’s ability to create complex, moving objects. As TradeShades explains, “The outer shell of the snowflake maintains its relative stationary position as the inner and outer core freely rotate about two separate axis, creating a gyroscopic motion effect. The product of moving parts is created through a single 3D printing session. Traditional manufacturing processes, such as injection molding, would require post-processing assembly to connect the separate parts of the snowflake and enable the gyro motion. Additive manufacturing is pushing forth a new era in the manufacturing sector and establishing itself as the next major technological innovation.”

Countdown to Christmas Ornament by edwardbcVT

edwardbcVT recommends a high-end FDM printer with soluble support an SLS machine for this print. If you’ve got one, you can print this planetary clock that counts down the days to Christmas with every spin of the gear. Watch the video of it in action on the ornament’s Instructable’s page.

Geared Up for Christmas by tiff.robbins 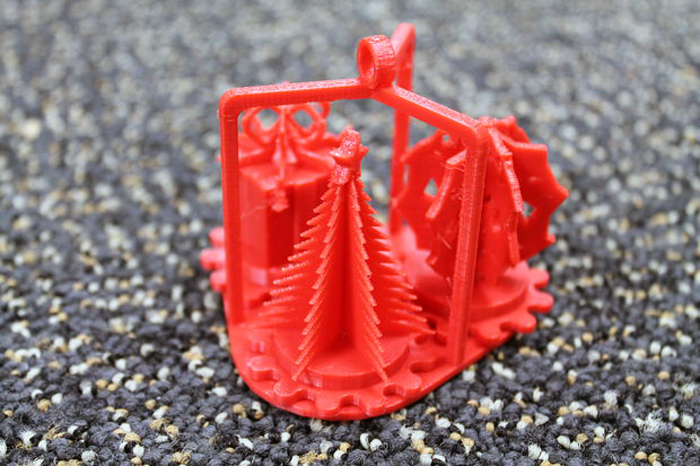 This one might require some soluble support to, but, if you’ve got it, you can 3D print this gear piece altogether and watch your Christmas spin as you rotate the gears!

Sleigh on the White House by shanek21 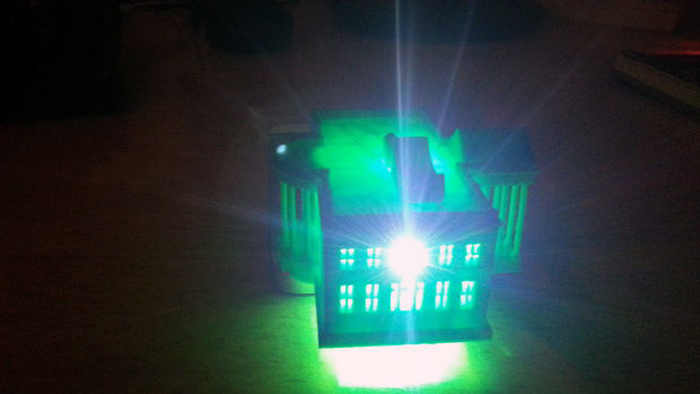 A hollow house you can fill with light! The house is the one where the Prez lives and the light is the light of democracy?

Essence of the Ice by allie.fauer 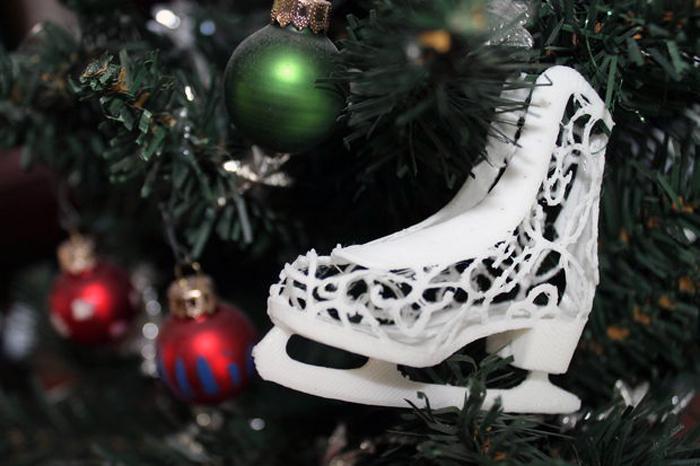 allie.fauer writes, “For my ornament, I decided to create an ice skate because of its stunning, recognizable form, along with it’s seasonal appropriateness. I applied a pattern to the ice skate’s surface inspired by lace that I believe embodies the aesthetic of the season.” You’ll either need a professional quality printer for this or a lot of patience, as removing the support structures by hand takes a lot of work!

Joy is Genetic by glaorenza 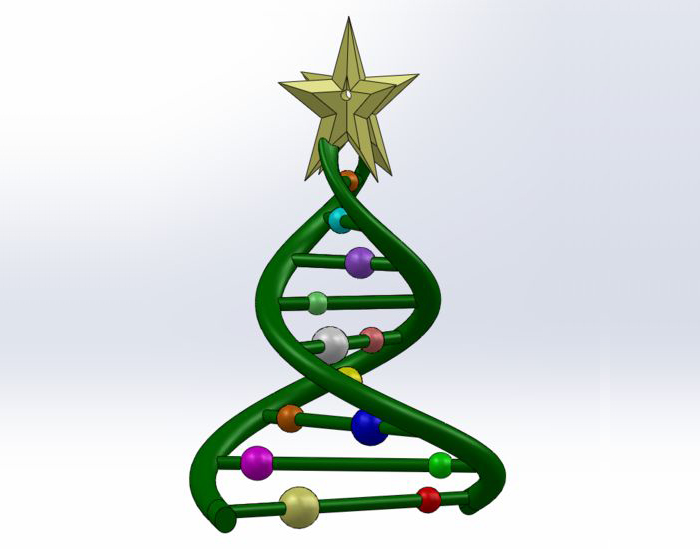 glaorenza’s DNA-inspired ornament has everything I, personally, like to see in an ornament: a complex commentary on the political nature of Christmas and the existential implications of emotions driven by biology. 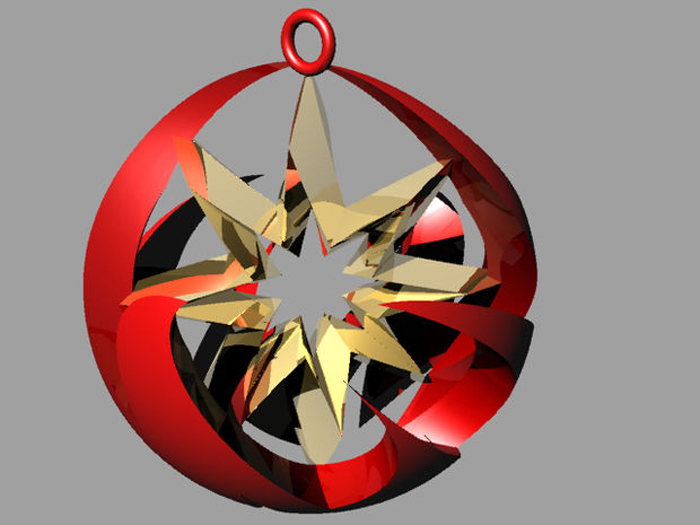 A bit of post-modern poetry from brianstansbury: “Gold star wrapped in Starball/Modeled in Rhino 5/3D printed in the Dimension SST1200es” 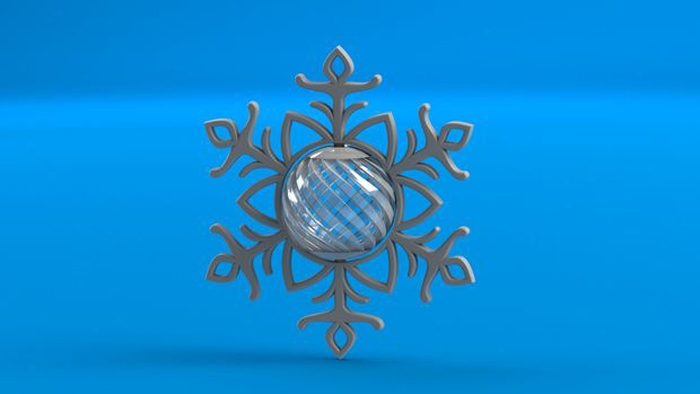 Saying, “‘Tis the season for all things winter-y (despite it still being November), which means snowflakes, ornaments, and CAD,” Beaconsfield gives a great explanation on how to create such a beautiful design in Solidworks. 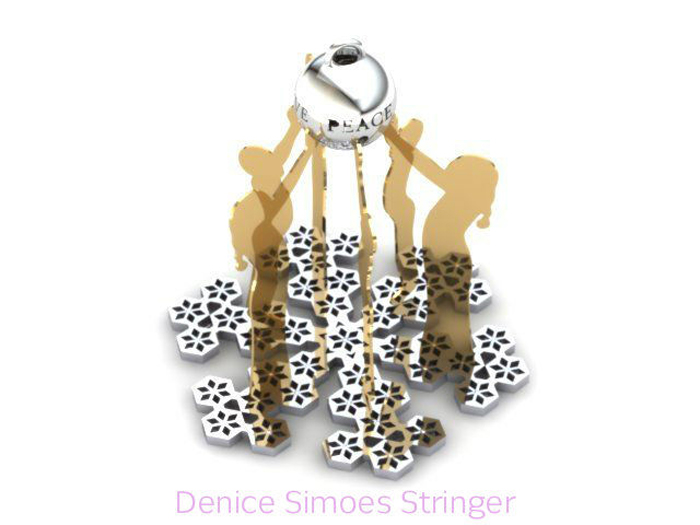 Denice incorporates her children into this ornament, snapping a photo of them holding a ball, tracing their outlines, and extruding them into 3D to render the most positive nouns of the season: peace, love, and joy. 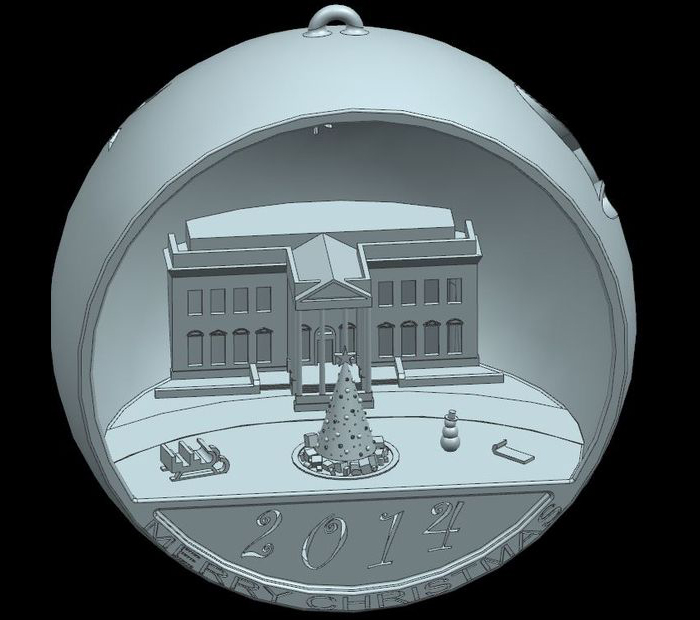 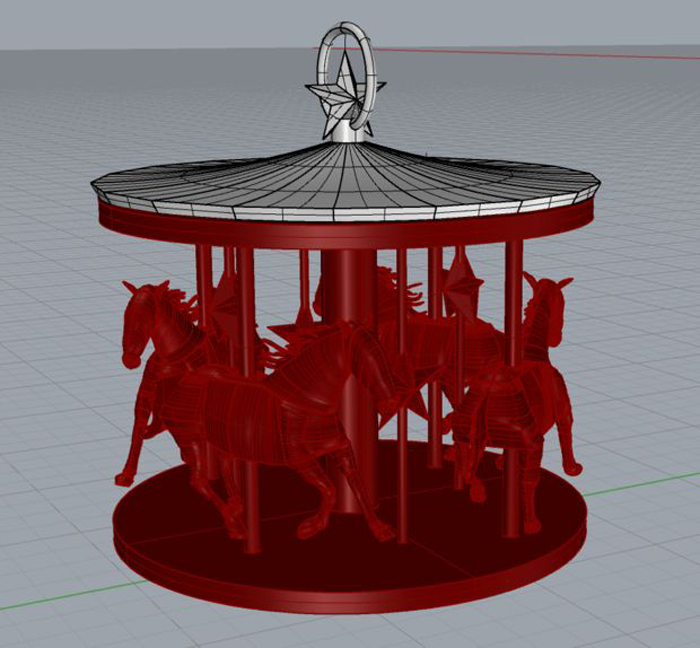 Here’s a 3D printed carousel that is designed to actually spin!

Library of Congress Ornament by VickyTGAW 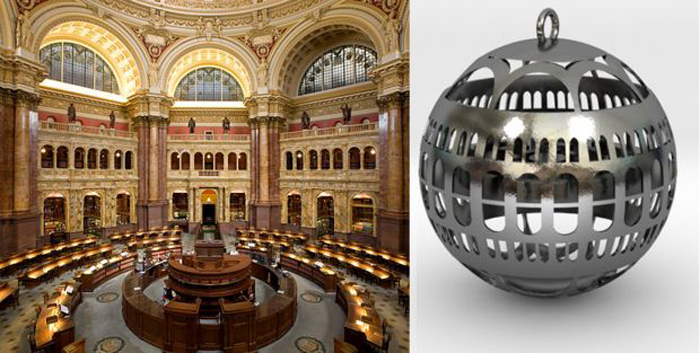 VickyTGAW gives a great series of instructions on how she converted the Library of Congress to a sophisticated 3D printable ornament. Vicky says, “I decided I wanted to do something inspired by one of our family’s favorite DC destinations– the Reading Room in the Library of Congress’ Jefferson Building. The beauty of the building and knowledge within is a great testament to the best of mankind and all the accomplishments yet to come!”

Presidents of Christmas Past & Present by CS3D 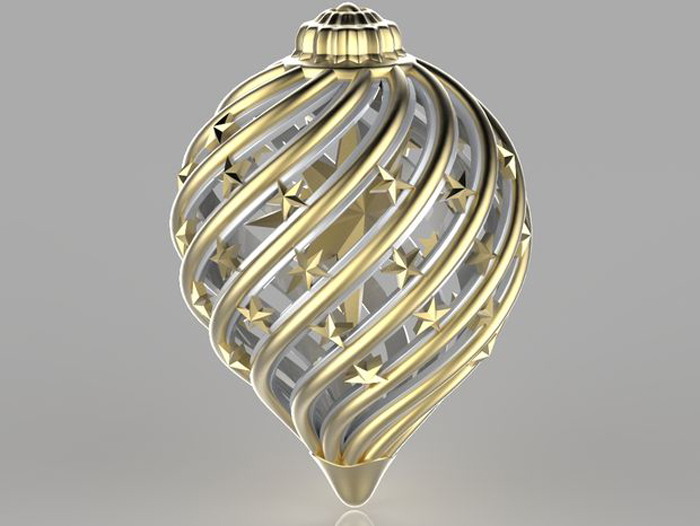 With 44 stars and a series of swirling outer stripes, this ornament represents the 44 presidents of the United States since Washington. 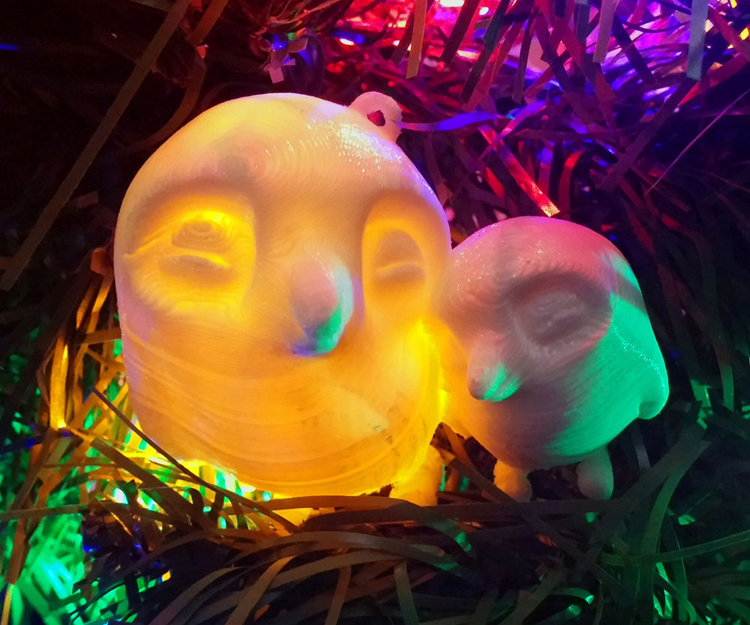 Vote for your favorite at Instructables and tell us which one you voted for in the comments below! A special thanks to Leandro for his kind note and beautiful ornament!