What were you doing at 17 besides slacking off and complaining about life? Well one 17-year-old has chosen a different route in his adolescence, deciding to use his angsty teenage years to build his very own SLS 3D printer! Johannes Rostek is based in Germany and hopes to become an electrical engineer in the future. Of course, 3D Printing Industry had to chat with Rostek to find out all about this printer and its incredible designer. In our interview we took an exclusive, in depth look at Rostek’s work and found out what he thinks about the industry and where it’s headed. First, take a look at a test print of a 3x3x0.5cm gear, which took Rostek one hour to print, and then read on below to find out more about the printer.

Rostek was introduced to 3D printing only two years ago when he became interested in an FDM 3D printer that he wanted to buy. Unfortunately, at 15-years-old, the printer was a bit out of the price range of Rostek’s allowance. Instead of giving up, however, Rostek soldiered on and decided to build his own printer.

I’m not sure about you, but as a teenager, my initial instinct after defeat was not to literally take matters into my own hands and solve my own problem. But I suppose with all the amazing technology right at your fingertips these days, it isn’t unheard of to find a DIY hack for just about anything you may need. Or maybe Rostek is simply in a league of his own, forging new paths in his generation.

Whatever the case, Rostek obtained a printer from e-waste, which he then innovatively used to 3D print parts for another, better working printer. He repeated this process, making better and better printers from their predecessor’s parts, until he developed a 3D printer with which he was ultimately satisfied. Besides seeing a need to make 3D printers more accessible to those who cannot otherwise afford it, Rostek says he builds his own printers because he wants to “understand the progress, how [they] work and how to solve problems. For me, it’s a hobby.”

Rostek is no amateur

Unsurprisingly, this wasn’t Rostek’s first time stepping up to the plate in the world of DIY 3D printers. Rostek says, “I already published some other 3D printers on Instructables, like the Cherry €60 3D printer or the [two] Vulcanus 3D printers. With these printers, I learned a lot in CAD. But you can not compare SLS to FDM. SLS is so much more advanced than FDM. [With this project], I had to start again from zero and do some tests to understand and improve [the] DIY SLS 3D printer.”

Powered by a standard Ramps 1.4 electronic, Rostek built his printer with ease of assembly in mind. The DIY SLS 3D printer can be built using aluminum extensions, screws and wood, and also requires 3D printed parts from an FDM printer. “In addition to this I added a laser driver and a 1w 450nm Laser Diode to the electronic. For me, it works surprisingly well. I just had to add some custom G-codes to Slic3r, which is a free slicing software for  FDM printers, to generate G-code that can be used with my SLS-3D-Printer. The most advanced problem is with the material. It is very hard to find a material which can be printed without any warping.” Despite having trouble finding the right material, however, Rostek has already printed a small gear in a black powder coating material, as shown in the video above. 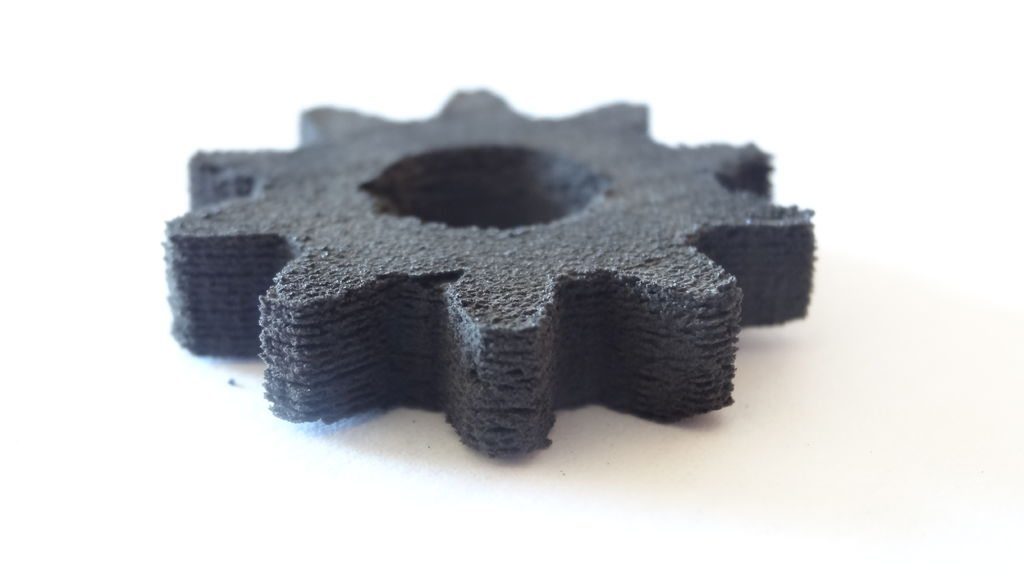 In the future, Rostek believes that SLS printers will eventually replace common desktop FDM printers that we see on the market today, stating that “SLS is the best and most advanced 3D printing technology nowadays.” With the more advanced printers, he says that users will be able print more complex projects in a wider range of materials. As for his own “hobby,” Rostek definitely plans to do more: “You can expect more projects from me. I will be upgrading the SLS 3D-printer to print more materials like nylon. Also I’m currently building a DIY CNC-Router. So stay tuned.”

Stay tuned indeed, as we here at 3D Printing Industry are certainly looking forward to what ever else Rostek has up his innovative sleeve.