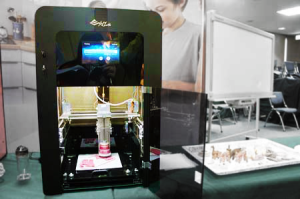 At a press conference, XYZprinting CEO Simon Shen showed off two prototype machines, a larger, three-nozzle device and a smaller single-nozzle device, both capable of 3D printing food paste into any predetermined shape.  Though they can’t directly cook the prints, by using pre-filled ingredient capsules, the printers can produce such snacks as cookies, chocolates, and pizzas. According to Taipei Times, Shen said at the conference, “We are working with different suppliers of food ingredients to go with the machine. We believe that in the future 3D food printers might be used in space to print out food for astronauts, a topic NASA is researching at the moment.” The printers, prices and names yet to be determined, are meant to go into production early next year and in the market by the second quarter. 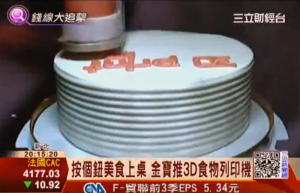 Also at the press conference, XYZprinting demonstrated their new da Vinci AiO combination 3D printer and scanner, which can both 3D scan an object, and then duplicate it.  The AiO is currently available for purchase for just $799.  Compared to other 3D printers on the market, XYZprinting produces some pretty affordable stuff, so it’s likely that the food printers will be low-cost, too.  At the same time, it was pointed out to me in a previous post on the company, that the consumables for the printers are proprietary, so that you can’t find a low-cost materials supplier.  This built-in cost may drive up the long-term expense of the printer.  We might wonder how much the food capsules for the printers will be. 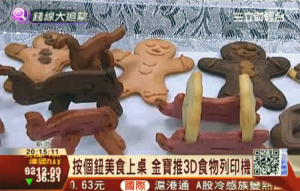 Though there are a few food 3D printers about ready to hit the market, like the Foodini from Natural Machines, XYZprinting may be attempting to rush these food printers out before the competition.  The Foodini won’t be available until at least the second half of next year and we’re still waiting for 3D Systems’ ChefJet to appear on e-shelves.  This will also mark the first major 3D printer manufacturer to release a food printer capable of printing more than just sugar, as the ChefJet does.

Below is a video from the press conference, showing the sorts of things the printers can do.  Bonus if you speak Chinese because you’ll actually be able to understand it: