They aren’t fooling; X3D Machines has launched their Kickstarter campaign for their Genesis Uno and Duo 3D printers at an “early backer” price of $249-$349.

This is a too good to be true, sort of deal, right? Well, let’s preview the specs and explore what Genesis Uno and Duo have to offer. 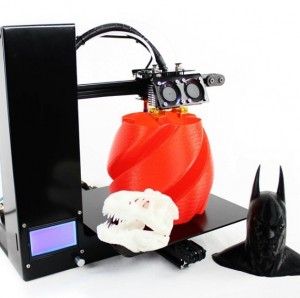 Both Genesis models are SD card and USB compatible, with an LCD screen that monitors your print stats. Both models also support wireless printing to allow for mobility and ease-of-use. Genesis Uno and Genesis Duo feature a sleek, non-boxy design with a sheet metal exterior and a tempered aluminum removable polycarbonate print bed and extrusion gantry. And the two machines use PLA/ABS materials and have a nozzle diameter of 0.3 mm. X3D Machines supports the RepRap and open source community, and both models will rely on open source software, such as OctoPrint and Mattercontrol. They are compatible with Windows, Mac and Linux operating systems.

One of the major differences between Genesis Uno and Duo is that the Duo offers a larger print area, 12″x12″x11″, which is the largest print area on the market at a $349 price point. The Duo weighs in at 11 pounds and is a little bigger than the Uno with dimensions of 17″x17″x15″. The other major difference between the Genesis Uno and the Genesis Duo is that the Duo features dual 0.3 mm extruders, allowing you to print with two colors or materials. The X3D Machines website purports that the Duo’s dual extruders will print at “blazing speeds”, which is, as of yet, an unverifiable claim.

There have been a few inexpensive 3D printers that have launched to success on Kickstarter, like the Peachy 3D printer and the Micro 3D, so we’ll hope for the best and not another Buccaneer 3D experience.  If you’re interested in backing X3D on Kickstarter, check out their campaign.