Across the 3D printing hype that has inundated our global society, attention has been focused on the extremes, from the desktop machines that make the dream of manufacturing from home a reality to the large-scale structures formed by enormous concrete printing systems. In the press, medical stories, in particular, are attached to headlines that say “3D printing saves lives” and elaborate facial reconstruction operations pour through social media as though a dam broke somewhere. Lost in the flood are the subtler stories that don’t hyperbolically champion the technology as a means of instantly revolutionizing our world, but rather as a tool to advance our civilization over time.

At Arizona State University (ASU), bioengineering researcher Dr. David Frakes isn’t 3D printing liver tissue. Instead, he and his team at the school’s Image Processing Applications Laboratory are pushing aneurysm research with the use of advanced technology and thorough high-tech empiricism. And, while 3D printing plays a vital role in Dr. Frake’s research, it does so quietly in the background, allowing the scientists to perform the much needed work of improving the treatment of cerebral aneurysms.

A cerebral aneurysm occurs when a blood vessel in the brain weakens and swells with blood, with the potential to rupture and flow into the brain, causing damage to the brain cells. According to the Brain Aneurysm Foundation, about 1 in 50 people in the US suffer from unruptured brain aneurysms, with about 30,000 people per year experiencing a rupture that can lead to disabilities and, in the case of 15% of those ruptures,  death. Treatment of the disorder can either include surgical clipping, in which a clip is placed on the neck of the aneurysm to seal it off, or endovascular coiling, wherein a platinum coil or stent is fed into the aneurysm, potentially filling the ballooned vessel completely and, in turn, causing the blood to begin clotting and seal off the aneurysm. Dr. Frakes says of coils and stents, “Despite the advantages of endovascular treatments over conventional surgical techniques, they are often unsuccessful.”

The doctor has tasked himself with overcoming the obstacles of current treatments.  Funded in part by the Mayo Clinic and the National Science Foundation, ASU has one of the leading programs pushing these treatments forward, with Dr. David Frakes, his Graduate Research Associate Justin Ryan, and their lab inventing unique methods for studying the dynamics of aneurysms from real patient data. In order to better understand how new coil designs can more effectively block blood flow to the aneurysm, the lab has created physical replicas of these deadly phenomena and put them through rigorous experimental testing.

Dr. Frakes’s lab has created virtual models of actual aneurysms to study how blood flows into and past them with Materialise’s Mimics Innovation Suite software, but the lab needed to validate its computational studies with experimental studies in the physical world, ensuring that their simulations were accurate. To create the intricate polyurethane mold necessary to study blood flow, Frakes took advantage of a millennia-old manufacturing technique brought into the 21st century with Solidscape 3D printers.

Solidscape has been around for about 20 years, first manufacturing their wax 3D printers in 1994 and later acquired by Stratasys in 2011. For those who have grown to understand 3D printing through the affordable desktop market, the initial benefits of the company’s Smooth Curvature Printing® (SCP®) with wax may not be immediately obvious. It’s possible to fabricate realistic prototypes with Solidscape machines, but the real strength of their technology lays in the ability to manufacture precise, high-resolution molds for lost wax casting.

Stereollithography (SLA) and digital light processing (DLP) printers can produce wax-like objects for casting, as well, but, as I’ve learned, Solidscape’s proprietary technique is capable of creating layer thicknesses as fine as 6.25 microns. For a comparison, 3D Systems’ ProJet 1200 is capable of layer thicknesses of 30 microns and the Form 1+ is capable of 25 microns. And, because Solidscape’s specialty support material for creating support structures is easily cleaned away, revealing a perfectly smooth wax object, the precision and refinement of their prints is pretty unmatched. These prints can then be used to create molds for casting very fine metal objects, like jewelry and electronic components.

In the case of Dr. Frakes and his lab, the Solidscape printer was necessary to make a completely clear polyurethane block for their research. After first using Mimics to convert MRI (and other scan) data of a patient’s aneurysm into a wax 3D print with the Solidscape machine, the lab was able to cast a pristine metal core. The core, made from a low-temperature Lead-Tin-Bismuth alloy, was subsequently placed in an acrylic mold box and surrounded by the optically-clear polyurethane. Finally, the core was removed through pressure, heat, and an acid solution. 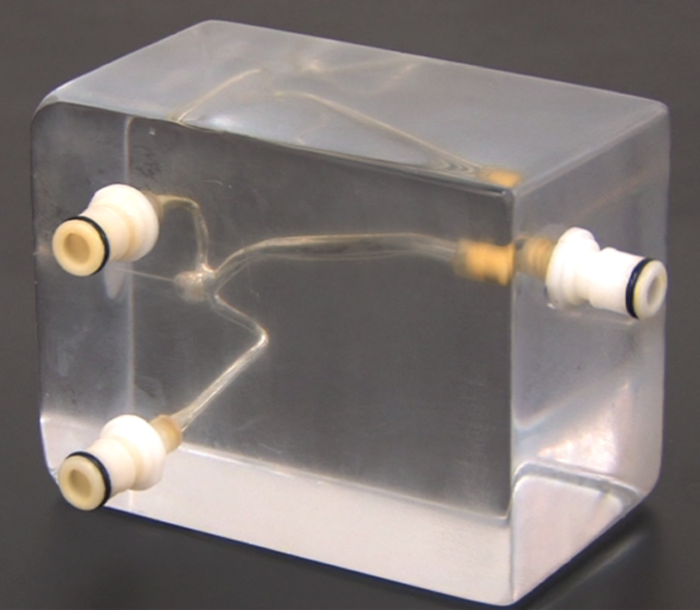 Once all of the hard manual labor was completed, the real work of dynamic testing was begun. Using the mechanical couplers attached at either end of the polyurethane block, the lab pumped particulate fluid through the channels in the block and sliced the flow patterns with a green light laser. By inserting various coils into the block to fill the aneurysm model, the team was further able to determine how a specifically designed coil might affect the overall blood flow and confirm their virtual simulations. For instance, coils with varying diameters or made from special materials could lead to better blockage of blood to the aneurysm. 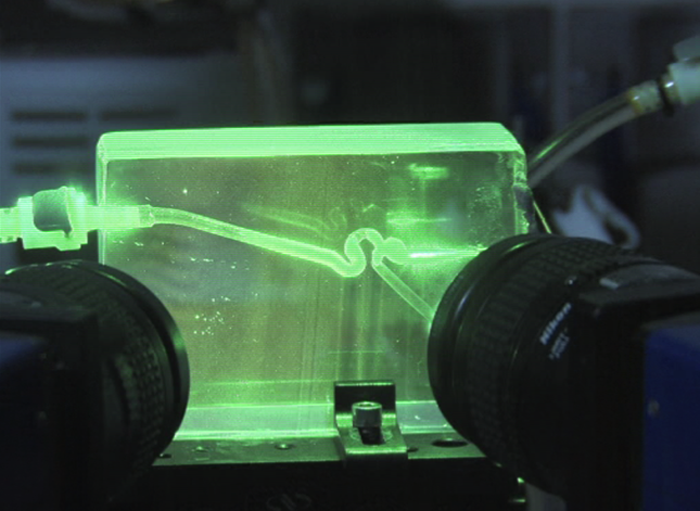 Speaking with Solidscape’s Vice President of Marketing & Communications, Bill Dahl, I learned that ASU’s research could, one day, lay the foundation for patient-specific medical devices. With 3D data of a patient’s brain, and the specific region containing an aneurysm, doctors could better determine the proper coil design for the patient. At the same time, these models might also be used to prepare for surgical planning and guiding the device to the aneurysm site.

Like many of the proposed patient-specific medical applications of 3D printing technology, this one may not be implemented this week, but the use of 3D printing in this specific example reveals some powerful potential for the technology that may not place it at the forefront of the story. In some ways, this story reflects Solidscape’s approach to marketing themselves as a whole. As Bill told me, they prefer to let their customers tales speak for themselves. For that reason, Bill and Dr. Frakes have been doing some of their talks at expos and conventions together, with Bill presenting the machine and the doctor taking over with its uses in his research.   It’s also why Solidscape has so many interviews with customers on their YouTube channel. Bill tells me that they may use a similar approach with their customer Jenny Wu, who utilized wax 3D printing to cast a truly exquisite metal ring.

Dr. Frakes and his team are continuing to take advantage of the company’s technology as they pursue future medical research and, as they do, we’ll keep you updated on their innovative uses of 3D printing. Until then, you can learn more about this most recent work from the video below. And, you can get more info about Solidscape at their website. Or, if you’re planning to attend, you can also catch Solidscape at the upcoming TCT Show, in which the company will be showing off their latest wax 3D printer, the Solidscape® MAX2.