The name, an acronym for Advanced World’s Saving Project, should not deceive. WASP is really a company of dreamers, founded in the name of a utopian wish to make the world a better place through additive manufacturing. WASP’s connection to the Earth, however, goes beyond the BigBigDelta house 3D printers project. The company itself is a shining example of Italian artisan craftsmanship applied to 3D printers. What the company lacks in terms of industrialization and serialization processes, it makes up for in dedication and attention to every detail.

There is another, perhaps even more “romantic”, aspect that brings WASP closer to the Earth and it is Massimo Moretti’s wife’s life passion, turned into sustainable business: natural essential oils and cosmetics. Barbara Pozzi’s Olfattiva’s biological fragrances production plant is right next to the WASP assembly line and, strange as it may seem, the two ventures go literally hand-in-hand.

Ever since Moretti decided to finance his dream by producing 3D printers – first the PowerWASP CNC and 3D printer all-in-one machine, and then the delta architecture DeltaWASP line – he and his team have been manufacturing, assembling, marketing and selling the machines in a single large room, with an adjacent open space dedicated to Moretti’s office. Now that the company has grown and is selling as many as 40 assembled systems every month, they are expanding into the surrounding buildings, which include two large warehouses and one room dedicated to research, development, and testing. 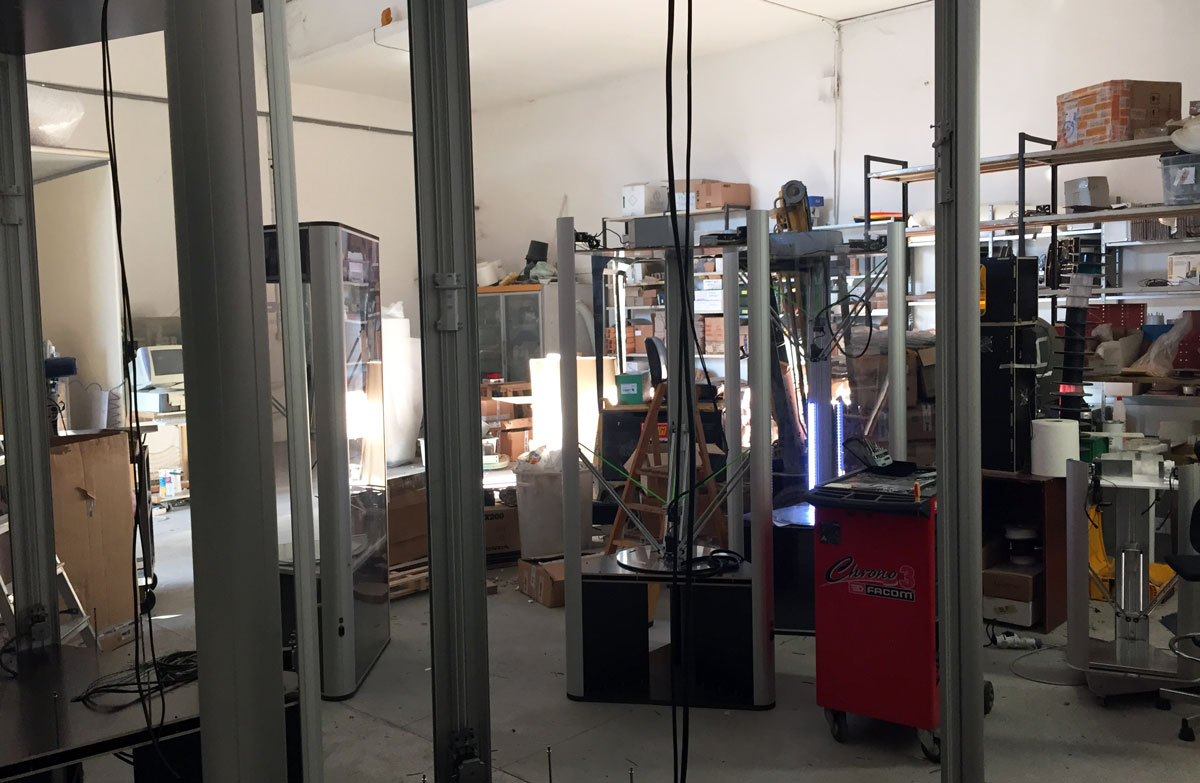 They will need all the space they can get, since Moretti is now more than ever set on building a new 12-meter delta 3D printer to top off the 8 meter model shown at Rome’s Maker Faire (although it was scaled down to 6 meters because it did not fit inside the company’s booth). This will be no easy feat. Anything up to 8 meters could be handled by people alone. A 12 meter system, capable of creating inhabitable structures as tall as 8 to 10 meters, will require the use of scaffolds and heavy duty machinery.

It all seems to be for a good cause.  And that cause is not just that of solving the world’s housing issues. In this regard, WASP has been and is a pioneer, together with USC’s Koshnevis and Dini from D-Shape. They have recently formed a partnership with Tridom to work on synergies toward a common goal. The other reason why all this effort is worthwhile is that solving the challenges of building a gigantic machine helps the team make a much better “normal” size machine. 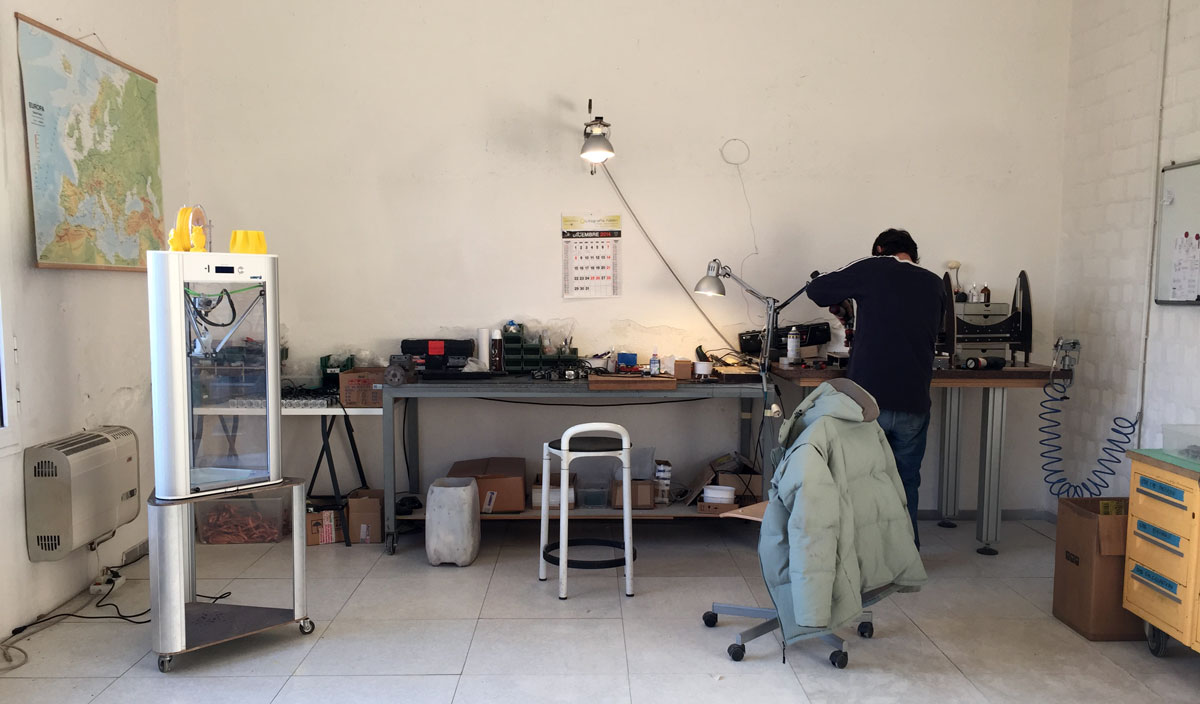 WASP now builds and sells the DeltaWASP 20×40 (priced at €2,370), the DeltaWASP 40×70 (priced at €5,500) and the DeltaWASP 60×100 (built to order). They also have a Delta Open DIY kit that you can take home for €840. I first found out about WASP at the London 3D Printshow in 2013, where they twon the Green Award, and I have seen the quality of their prints consistently grow. Now printing at .2 mm layers is enough for almost smooth vertical surfaces, while .1 mm is close to perfection.

Nicola Schiaparelli, the Dream on Moretti’s team (all their business card have “dreamer” as their title) in charge of communication and community relations, showed me around the shop and told me a little more about the company’s history. The truth is that it all really began with a wasp or, to be more precise, a wasp’s nest. Moretti studied the insects’ nests, those made with wooden fibers and saliva by paper wasps and those made with clay and saliva by mud wasps in Brazil. He set out to do the same thing for people: use local resources to build habitable spaces. Since he was already working in prototyping, he figured the best tool for the job would be a 3D printer, so he built one, developing the PowerWASP using cartesian architecture. Then, when the designs for a delta system were published on the Internet, he and his team realized that the delta’s highly scalable structure was the only possible fit to make objects large enough to live in. 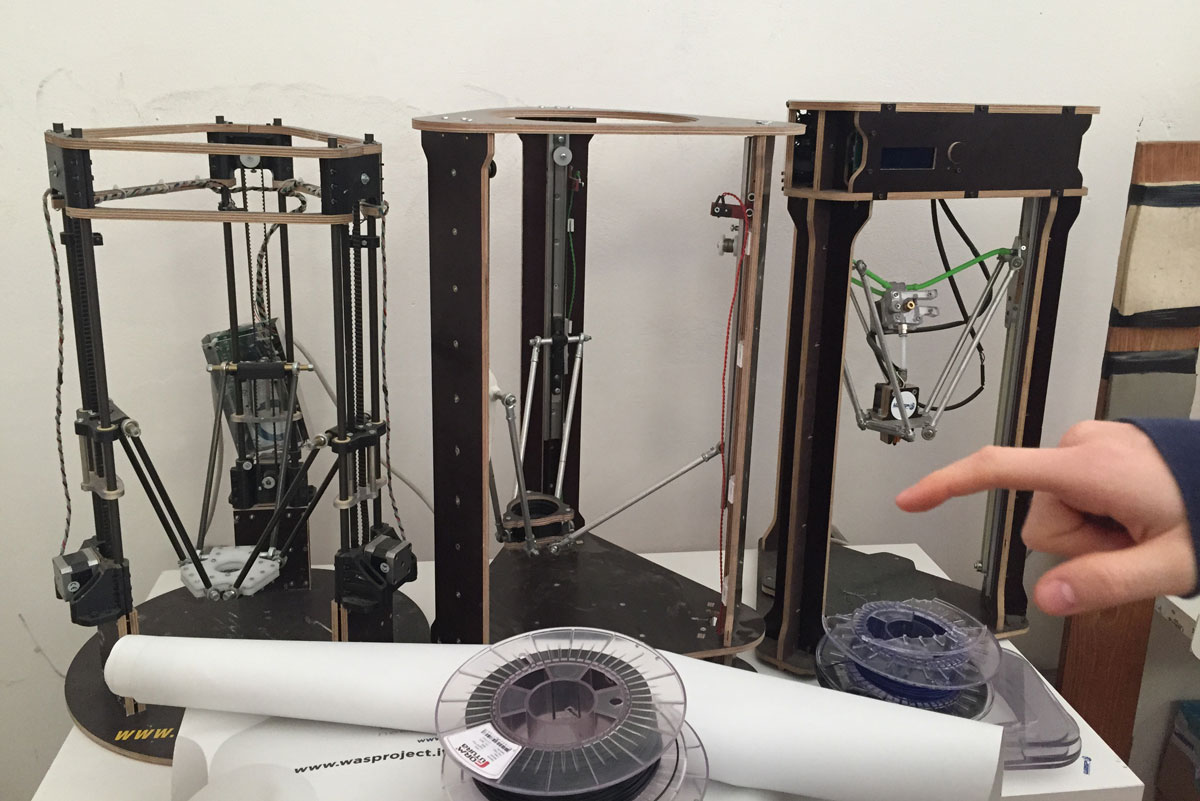 The WASP warehouse is full of experiments more or less directly related to the 3D printing. Using the same clay extrusion system they’ve created for printing houses, they have been doing extensive testing with ceramics – going as far as producing accurate busts – and many other paste-like materials, ranging from foods – such as chocolate – to biological gels for wet lab experiments. In fact, this vein of experimentation with new materials will bring WASP to “open” a part of its factory and make it into a makerspace or FabLab. They already have all of the necessary tools, including a large laser cutter and a little lateral thinking. 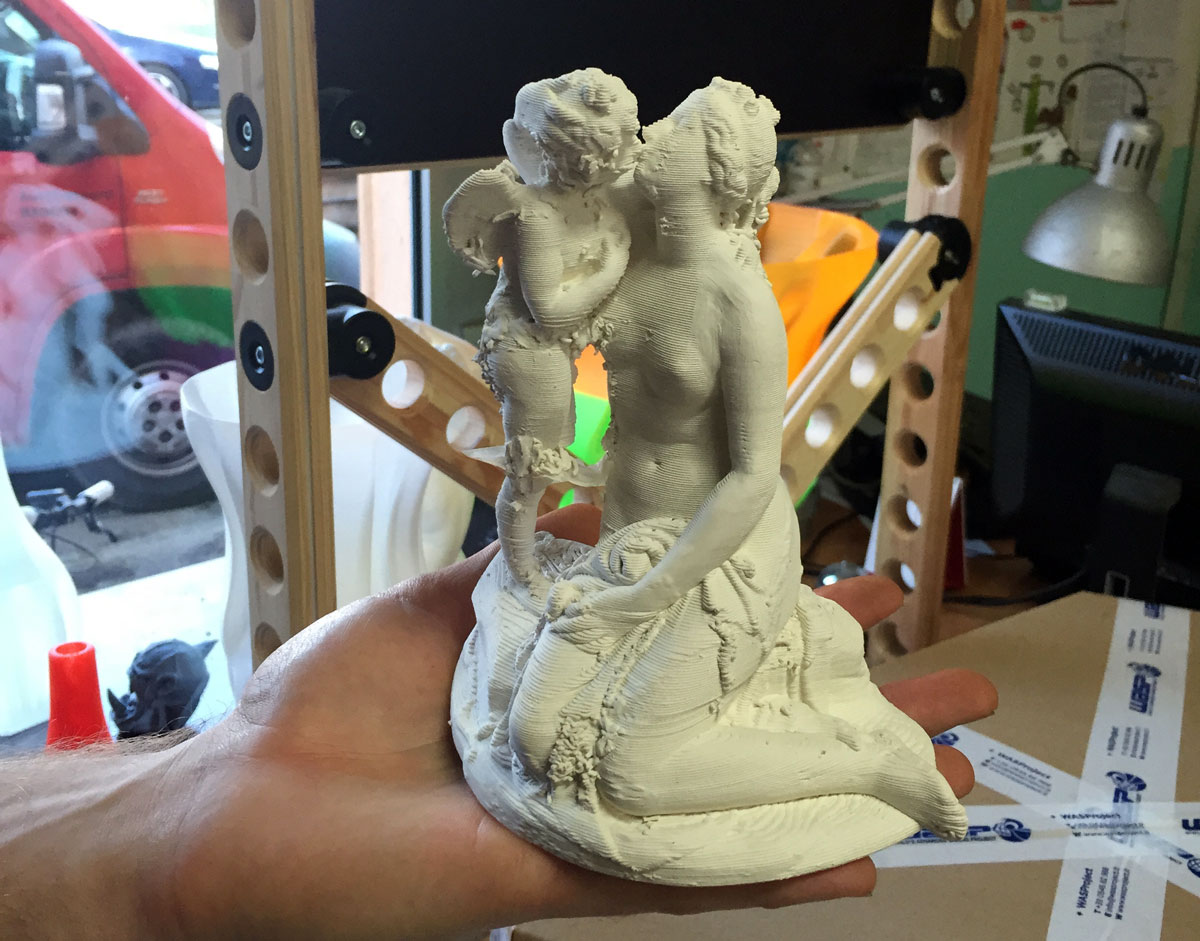 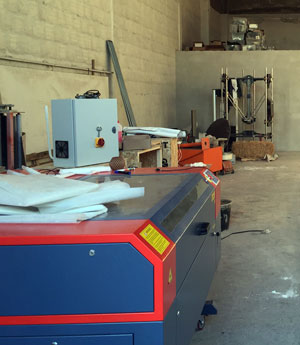 As is the case for many small Italian companies, WASP’s biggest strength could ultimately also be their weakness: the artisan care that goes into their work is a guarantee of quality, but it may be incompatible with growth, industrialization, and scalability of production The team’s resources are almost entirely dedicated to managing day-to-day demands and cannot focus long enough on expansion and future projects. Nevertheless, the scalability that matters most is that of the machine itself, both in terms and size and quality (the two are directly linked) which, after all, is also what WASP’s customers care about. After all, there are other companies, in the nearby Motor Valley, that have become very successful in this way.