As scientists work towards pushing the range of materials available for 3D printing further outside of plastics and metals, we can anticipate new 3D printing applications blossom at a slow but increasingly predictable manner. A group of scientists, engineers, and researchers at Virginia Tech’s Design, Research, and Education for Additive Manufacturing Systems (DREAM) Lab have 3D printed objects from a conductive polymer using an ionic liquid.

According to a post on Chemical and Engineering News, the team “built millimeter-sized objects with the ionic liquid 4-vinylbenzyl trioctyl phosphonium bis(trifluoromethanesulfonate)imide. They mixed it with a diacrylic monomer, such as 1,4-butanediol diacrylate or poly(ethylene glycol) dimethacrylate, both of which can be cured by ultraviolet light. When hit with light, the diacrylic monomers and phosphonium ions formed cross-linked polymer networks.” 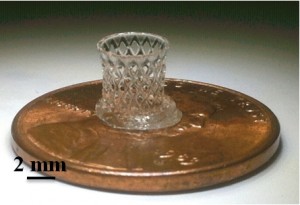 A computer-aided design system generated a pattern for the UV light to form on an exposed layer of the liquid, forming 3D printed objects. Just like desktop SLA printers, the cured layer was covered in more of the ionic liquid mixture, and the process was repeated again and again, until all of the layers were cured on top of one another. The objects being printed ended up having features as small as 25 microns. Not only would these small features be compatible with human cells at any stage of their life-cycle, the conductivity of their ionic liquid mixture would facilitate human tissue growth, making it possible to grow bone and skin.

The team didn’t create any functional devices, but, when tested, the cured polymer retained the same level of conductivity as the ionic liquid in its pre-printed form. Though other researchers have worked with nitrogen-based, polymer ionic liquids, phosphonium ionic liquids have recently become more available, which is important because they have a higher thermal stability necessary in high temperature applications. Higher thermal stability signifies that devices printed with the material will last longer than others in low temperatures as well.

The team at Virginia Tech plans to continue their research and further include the use of phosphonium ionic liquid materials, which could change mechanical and conductive characteristics available for new 3D printing applications.  Chemical engineer Joseph DiSimone of the University of North Carolina commented on the research, saying “I think this particular class of materials will trigger many ideas in a whole host of applications including electrochemical cells, biological systems, and separation media.”

On a recent AMA on Reddit, Dr. Long and Dr. Wiliams wrote, “This material could be used to make ion-conducting membranes for batteries, fuel cells, tissue scaffolds, or electromechanical actuators. The advanced manufacturing of the future will not use materials of the past. We are excited about a future where products are realized by the simultaneous design of molecules, product geometry, and the manufacturing process.”

Reading the AMA, my favorite question came from redditor wrowlands3 who asked, “Is there currently a way to 3D print both ceramic and metal in a hybrid complex structure? Or any way to sinter the ceramic so it doesn’t need firing afterwards?” To which Dr. Williams replied:

This is a great question. The challenges in printing ceramics and metals simultaneously usually come to differences in sintering temperature and coefficients of thermal expansion and . How can we selectively deposit a fully dense ceramic (which requires very high temperatures) on top of a metal (which has lower melting temperature)? This is a challenge not only for printing ceramic/metal composites, but even in printing multiple metals simultaneously (via a directed energy deposition technique (e.g., LENS) for example).

We are currently investigating techniques for fabricating ceramic metal composites by combining printing and metal casting. The PhD student working on this concept is finishing next month, so we’ll see how it goes 🙂

As for printing ceramics without firing: Some work has been attempted in this space by using high-powered energy sources (e.g., lasers found in EOS or ConceptLaser systems). However, this is tricky due to the amount of energy needed to directly sinter the ceramic powder in the bed. Since the kinetics of solid state sintering are so slow, the results thus far are really only focused on liquid phase sintering. Resultant parts are not (yet) fully dense.

The whole AMA is extremely informative and insightful and has a lot of great links to reference material that the team uses at Virginia Tech.