There are a number of 3D printing facilities across the US, including Stratasys’ Direct Manufacturing and GE’s Alabama plant, dedicated to their 3D printed LEAP fuel nozzles. Apparently, however, Norway’s Norsk Titanium AS (NTi) doesn’t believe that any of these are quite industrial-grade.  To push 3D printing into a mainstream manufacturing tech, the titanium 3D printing company plans to open a 200,000-square-foot plant that they deem the “world’s first industrial-scale 3D printing facility”.

Norsk will be opening the government-owned facility in an unnamed state as a part of a public-private partnership aiming to 3D print large-scale aircraft components relying on NTi’s patented Direct Metal Deposition technology. From the sound of it DMD is not unlike Sciaky’s large-scale arc welding tech. DMD uses a plasma arc to weld titanium wire directly onto a substrate until it reaches near-net-shape. The parts are then milled to reach their final shape. According to the company, this process is 70% more affordable, 90% faster, and overall less wasteful than other technologies, though I’m still trying to figure out which other technologies the company is referring to. NTi’s latest titanium printer is 120 x 120 x 180 cm in size, though the maximum length possible they say is 215 cm (that’s 4′ x 4′ x 5.9′ or 7′).

As the company moves in this direction, it has appointed Warren Boley as its CEO.  Boley is a former executive with Aerojet Rocketdyne and previously worked for United Technologies Corp. Boley says that the company plans to begin launching orders Q1 of 2016 and is in talks with Lockheed Martin to build parts for its infamously wasteful and underperforming F-35 fighter jet.  This deal may just go through, as the vice chairman of NTi’s board is former Lockheed executive, Chris Kubasik. 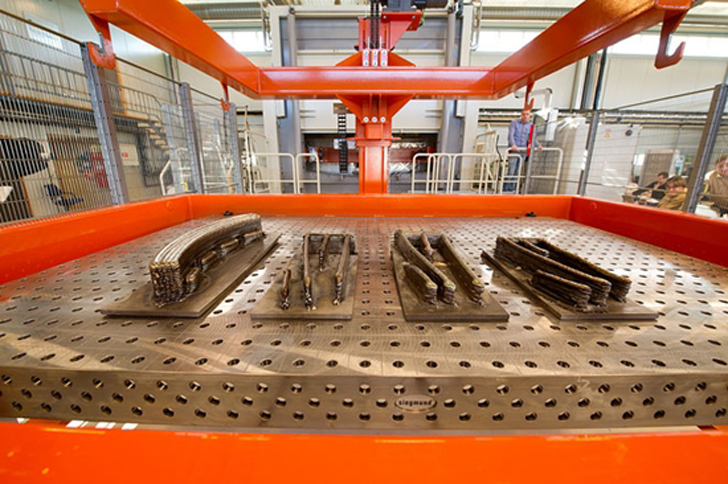 Comparing traditional manufacturing with NTi’s tech, Boley said that it can take up to 75 weeks to produce 100 pounds of titanium, but that the NTi printer can 3D print a part in five hours with a fraction of the material. Boley adds, “We’re going to make history. This is part of the next industrial revolution.”

The facility will open with several dozen of NTi’s large-scale 3D printers with plans to add more with time and NTi hopes to receive U.S. Federal Aviation Administration certification of the DMD process by the end of the year. I’m sure more information about the endeavor will be released as the ribbon-cutting ceremony approaches.  If this factory is a part of the National Network for Manufacturing Innovation, we may even be treated by requisite pomp and circumstance and a speech by the President.  And, we’ll get to find out where exactly this facility will be.