Let’s say you’re the US military and you want to create an Iron Man-like suit in which to encase soldiers on the battlefield.  Who would you turn to help you make the thing? Why not try the team behind the actual Iron Man suit, Legacy Effects, the Hollywood FX firm behind Robert Downey Jr.’s heroic armor for the Iron Man movies?

Legacy Effects – which has 3D printed a variety of props and special effects gear for movies like Pacific Rim, The Terminator, RoboCop, and Captain America – has found its latest project outside of Hollywood and on the stage of war.  The military has commissioned the Hollywood FX artists to help them design and 3D print prototype components for an advanced suit to enhance soldiers on the battlefield, a program they call TALOS (Tactical Assault Light Operator Suit).  A sketch of TALOS includes: a cooling system for maintaining a comfortable temperature in the suit, a Google Glass-style style visor, and a built-in exoskeleton, designed by Ekso Bionics, to give troops the strength to carry hundreds of pounds of great. 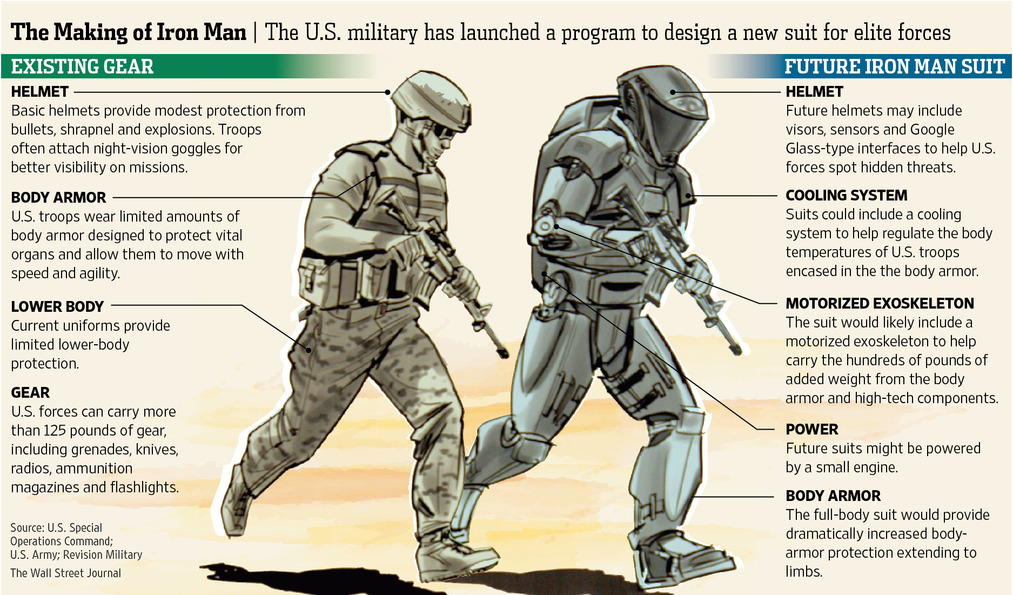 The FX company will be joining a large team already at work on the project, made up of bioengineers, combat veterans, and technology specialists, as well as defense contractors Raytheon, Lockheed Martin, and General Dynamics.  Legacy isn’t even the strangest addition to the team, if you include Mawashi Protective Clothing, which is studying the exoskeletons of insects and another group that is looking at how sumo wrestlers move so spryly while carrying such heavy payloads.  The reason for this last bit of research may spring from the fact that the military estimates the weight of the suit to be something like 400 pounds, 365 of which make up the batteries alone, needed to power all of the suit’s crazy features.

$10 million has been spent on the suit so far and the military plans to spend another $70 million to deploy TALOS by 2018.  Ironically, if all of this were taking place in an actual Iron Man flick, Tony Stark would probably end up fighting an army of TALOS soldiers to ensure that his technology didn’t get into the wrong hands.