The CEO of Modern Meadow, Andreas Forgacs gave a speech at the recent Google Solve for X conference. For those unfamiliar with the work of Modern Meadow, it is the company developing 3D bioprint technology to produce meat and leather products, previously reported on TIME, Scientific American and at 3DPI here and here.

During his speech Forgacs focused on the current fundamentals related to how we produce meat and leather, and, of course, introduced the concept of how this could change in the future with new technology such as 3D printing, or specifically 3D bioprinting.

To give some perspective, Forgacs talked about what resources it takes to produce one quarter pounder hamburger steak:

So, if we multiply this by a 1000 it’s the average carbon footprint of an American per year. Scaling this up, there are 7 billion people walking on earth today. Their meat consumption is currently supported by 60 million land animals. By 2050, the same figures are estimated to be at 9 billion people supported by 100 million land animals – nearly double. What this means, according to Forgacs, is that we are hitting the limits of exploiting our planet’s available resources, in terms of ice-free land, global water supply and greenhouse gases. And we are not even touching the topics of chemicals used within the industry, how diseases spread or how the animals are being treated.

Forgacs proposed a solution, which is a new bioprinting technology that would allow for the creation of meat and leather without the heavy consumption of the previously mentioned natural resources. Being one of the pioneers in this field, and previously one the co-founders of Organovo, Forgacs explained how the meat is constructed through digitizing tissue growth.

Bioprinting is based on cell aggregates consisting of tens of thousands of cells, which are then organised and deposited in layers and patterns, which then fuse together. The cells then start to behave exactly as in nature.

The process flow below shows how bioprinting technology would be applied to creating meat, through taking a biopsy of the tissue. For leather it would be skin, for meat it would be muscle tissue.  The cells would then be isolated and proliferated in a tissue culture medium, in other words going from millions of cells to billions of cells. The next step would be depositing them in a 3D pattern, allowing them to diffuse in 2 dimensions and 3 dimensions. Then for meat it could be marbled and ground up to its first version, which could be used to create pates and sausages etc. 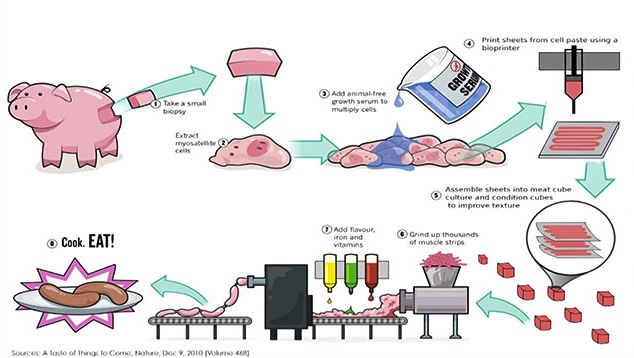 The concept is very interesting and initiated a lot of conversation at Reddit recently. A particularly popular topic stemmed from Turducken concerning the possibilities of combining meat flavors to create something completely new such as beef and chicken, or (& personally I find this a little weird) eating human meat. Also, for vegetarians and vegans this could possibly open a window of eating meat products, without losing their stand on the current treatment of animals in the industry.

Modern Meadow also offers tasting sessions in larger cities, so if you are interested make sure to check on their website for more info.

Watch Andreas Forgacs’s full speech on the video below:

Problem: 8% of the world”s water supply and one third of the world’s non-ice landmass is used for raising livestock for meat and leather. At least 18% of the greenhouse gases entering the atmosphere are from the livestock industry.

Solution: Fundamentally change the way meat is produced by growing the meat directly instead of raising the entire animal.

Technology: 3D printing and tissue engineering now allow bioprinting: the design and fabrication of three-dimesional tissues. The meat created in this process could be carefully designed to have the same mouth feel, texture and flavor as traditional meat.