Uformia is a Norwegian software company, and is one to remember when considering digital 3D modelling tools in the future. The company has announced two very interesting products, developed to overcome specific challenges related to 3D modelling and 3D printing. One example would be how finished 3D printed objects can be structurally weak or have holes, despite the original computer model being perfect. This sometimes problematic relationship between an apparently immaculate 3D digital model and less than perfect 3D printed outcome has been scrutinised and labelled a limitation of the technology. Indeed, last month we reported on different software, also designed to address the same issues.

For Uformia, however, resolving this issue is central to its remit and the current campaign regarding this is Save the World from Polygons!. Uformia’s strategic war on polygons and imperfect printed objects is being fought on two fronts. The first is in the form of software called Symvol, which is an add-on for Rhino that is commercially available through Uformia’s website. The second is a Kickstarter project offering a 3D modelling mashup tool named MeshUp, which we’ll be taking a closer look here. 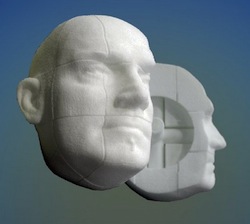 Leigh McLoughlin, Community Manager at Uformia, explains the  thought process behind their general mission: “We are looking to shake up and revolutionise the way people model objects for 3D printing. The problem we’re looking to solve is that existing surface and polygonal modelling methods can be great for graphics, but they’re lousy when it comes to 3D printing. They commonly exhibit holes and intersections that require time and effort to fix. Also, because there is no inherent knowledge of an object’s volume, multi-material and material blends are impossible to define with polygons”.

”CG artists and designers know only too well the limitations and tediousness of modelling with polygons” Turlif Vilbrandt, CTO and joint founder of Uformia

The most intriguing part of all of this, of course, is the solution, which could hardly be described as an orthodox one in the current software climate. ”Our solution is to use pure mathematical volumes (not voxels or parametric surfaces) rather than surfaces and polygons, which makes it perfectly suited to 3D printing. MeshUp will allow mesh import, repair and conversion to volume, easy mixing of meshes as well as shelling and microstructures. Perhaps most importantly, the mathematics of our system guarantees that our objects are always watertight, making them significantly easier to 3D print,” McLoughlin explains.

It all sounds great, but what does this all actually mean? Uformia summarizes the benefits of MeshUp into four categories. 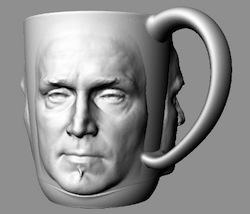 1) Mesh Mixing – Creating new objects by combining or mixing any number of meshes or parts of them. 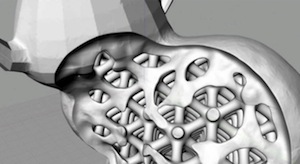 2) Shelling and Microstructure – Designing objects that are lighweight and structurally sustainable.

Much recent news regarding 3D printing has been about new hardware launches and new/different materials. Often the data input — the foundation stage – is overlooked but it is a vital part of the ‘3D printing’ process and deserves equal coverage, which we are happy to fulfil. If the foundations are not solid the rest of the process cannot stand strong. A viable process — end to end — is absolutely vital as 3D printing heads towards the average consumer. MeshUp is a great step in this direction, breaking down issues that exist today. I look forward to the time when today’s 3D printed parts and their respective 3D printers appear in a historic gallery with Windows 1.0 and other pioneering giants — reminding us of the long road behind us and the progression achieved, whilst also reflecting on the struggles that a new disruptive technology inevitably brings when hitting the market on a global scale.

But before that — today — I will leave you with the optimistic vision and can-do attitude of Uformia’s Leigh McLoughlin: ”We are looking to radically change the way users create models for 3D printing and are positioning ourselves as offering the only *real* solution to the problems that makers and industry professionals face.”