In the transition phase of 3D printing where a personal printer is not yet a household must, the thirst for creating something unique and distinctive still needs to be quenched. To fullfill this need many companies are offering their helping hand with in-house printers capable of manufacturing whatever the end user desires. However, the sought for creations often have another deeper characteristic under the individual artistic apperance – a piece of fragile structure, which does not necessarily endure the hardships of the logistical chain needed to deliver the respective piece of work to the actual creator-slash-buyer. “You can go online, create something using a 3-D printer and pay $300, only to find that it isn’t strong enough to survive shipping and arrives in more than one piece,” 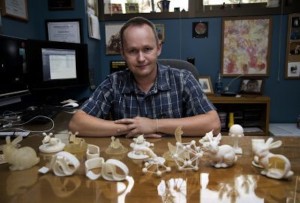 states Radomir Mech, a senior research manager from Adobe’s Advanced Technology Labs. A concrete example and validation of the problem at hand is given by Bedrich Benes, an associate professor of computer graphics at Purdue University: “I have an entire zoo of broken 3-D printed objects in my office”.

This can be seen as a major issue, especially when looking at the consumer 3D printing market in its current phase – before the traditional logistics are pushed aside by delivering software and files to the end user to be brought to life in the comfort of their own homes via their personal 3D printers. To solve this problem Benes has teamed up with Adobe’s Advanced Technology Labs. What they have created is a software, that could make this nuisance history. How does the software work to overcome these issues?  ”It runs a structural analysis, finds the problematic part and then automatically picks one of the three possible solutions,” Benes states. The aforementioned solutions are automatically strengthening the object by increasing the thickness of key structural elements or by adding struts to the created piece.  The third solution provided by the software is by reducing the stress on structural elements by hollowing out overweight elements. The program also identifies potential stress points automatically – referring to areas in the object that the user is most likely to handle and grasp. Watch the video on the process below for more detail.

Besides the physical benefits of added endurance, other positive aspects can also be gained via using the software: “We not only make the objects structurally better, but we also make them much more inexpensive. We have demonstrated a weight and cost savings of 80 percent,” explains Mech.

However, the created software might not be something that the most pedantic fabber who believes that the beauty is in the details could see him/herself using. “The 3-D printing doesn’t have to be so precise, so we developed our own structural analysis program that doesn’t pay significant attention to really high precision,” mentions Benes. One example of this rationally understandably chosen approach can be seen below – showing the first solution of thickening the structural points of the object. 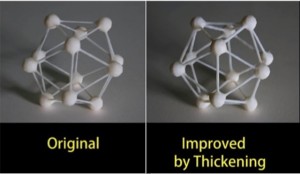 Therefore this could be either seen as a starting point for more sophisticated software to be built on or as the steering stick from the automotive history – something that was overtaken by something objectively more suitable. Which in this case would be the paradigm shift of moving from delivering objects to delivering data and applications via internet. Time only will tell.

0 0 0 0
More on this topicBilled as the first truly high-resolution, low-cost 3D printer for design professionals: Formlabs Launches the Form 1 3D Printer
More on this topic3D Printing Cellulose Tightens the Gap Between Engineering And Arts Students