Tethers Unlimited Inc’s (TUI) Firmamentum division have announced a collaboration with Space Systems Loral (SSL) that will allow them to demonstrate their on-orbit manufacturing technology, specifically for building kilometer scale space systems. As part of the Dragonfly program, Firmamentum hardware will be used to assemble a geostationary communication satellite, the type that are normally in charge of bouncing radio frequencies back to Earth. This program is being funded by NASA as part of their initiative to develop collaborations with industry in order to advance human and robotic space exploration.

Firmamentum plan to test their Trusselator technology, a proprietary carbon composite additive manufacturing device that works best in micro gravity environment. In essence, it’s a machine that uses 3D printing techniques and robotic assembly to fabricate long truss structures. According to Dr. Robert Hoyt, TUI CEO and Chief Scientist,  The long term vision is to launch a “satellite chrysalis” containing all the raw materials necessary to build in space, rather rather than subject the delicate and highly engineered hardware to the “10 minutes of assault and battery” that typically occur during launch.

“The evolution of next generation communications satellites and space systems depends on dramatic advances in technology and manufacturing processes,” said Dr. Matteo Genna, Chief Technology Officer of SSL. “Firmamentum plays a key role on the Dragonfly team and enables us to demonstrate the importance of in-space manufacturing, which we expect will be a significant capability for future missions.” 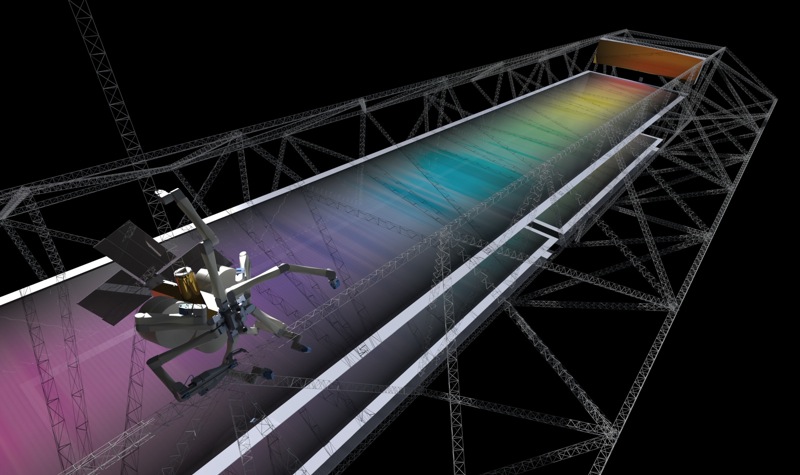 This project is part of the wider goal of TUI to create series of fabrication devices that enable on-orbit fabrication called SpiderFab. The project could help build immense structures in space such as massive solar arrays, large solar sails and football-field sized antennas to improve communications on Earth.

According to TUI, the primary benefit of this on-orbit fabrication is the improved packing efficiency and system mass, which basically means that NASA, or the particular space agency or private enterprise using the technology, can save trips to space by launching highly concentrated fabrication material instead of built on earth structures that have to be deployed in space.

3D printing is revolutionizing the notion of what we can do in space. Not only is 3D printing assisting NASA in getting people to space,  it’s also making the idea of space exploration more feasible by allowing us to depend less on Earth for the manufacturing of objects and structures. With mounting anticipation that humans might explore Mars in the (relatively) near future, technology that allows practical manufacturing solutions in non-Earth-like environments (read, no gravity) becomes increasingly relevant.

All images courtesy of TUI.

Ignacio Tovar is a founding partner of Steed, a small innovation consultancy based in Mexico City and organizer of the futurologi event series. He is currently studying a MSc in Innovation, Entrepreneurship and Management at Imperial College, London. Ignacio is interested in the development of social, economic, design and technology trends as they shape the future.