After the success of our first Top 10 list of sub-$1,000 3D printers (some of you pointed out that it was a list of all available sub-$1,000 3D printers, not just the top 10, and you are correct), this time we set out to put some order in the increasingly confusing world of low-cost, photopolymer 3D printers. These are some of the parameters we used (prices as indicated exclude sales tax):

We only considered 3D printers that cost less than $5,000 so this leaves out Autodesk’s Ember, Sharebot’s Voyager and, naturally, all the professional 3D printers by DWS and, especially, EnvisionTEC, which is the undisputed leader in the professional segment for DLP-based 3D printing technology. This obviously also leaves out all multi-material jetting 3D printers, such as those from Stratasys and 3D Systems. Among the large manufacturers, only 3D Systems makes the list with its ProJet 1200.

We did not position the 3D printers on the list by price, but only a subjective approach. Although we have seen some of these in action, we have never personally owned any of them, so, in most cases, ours is an impression, which is very much based on how well the experiences of people who have them and how well the manufacturer communicated its product to the media.

We are aware that there may be more sub-$5,000 3D printers out there that we don’t know about (I think that, at the last Euromold, I counted about 25 companies and I am sure some of them did exhibit low-cost systems). However, because of the previously mentioned points, these are the ones we have covered in the past. Also, we are only covering 3D printers that are already available on the market and have clear information available on ETA for delivery, which means we had to exclude Old World Labs‘ and DWS LAB’s Xfab 3D printers, among the most interesting that have been announced, the former for its 100 nm/1 micron resolution and the other for its cylindrical 180 x 180 mm build volume.

We also did not include kits or 3D printers that are only available with external projectors or with projectors that are not included, leaving out super-low-cost projects such as Lumi Industries’ LumiPocket and the Peachy Printer. It would have been too complex for us to evaluate the actual full price of these systems. We hope that those who have the knowledge, time, and ability to build a resin 3D printer from a DIY kit already know where to go, without us pointing it out to them. For everyone else, here we go. 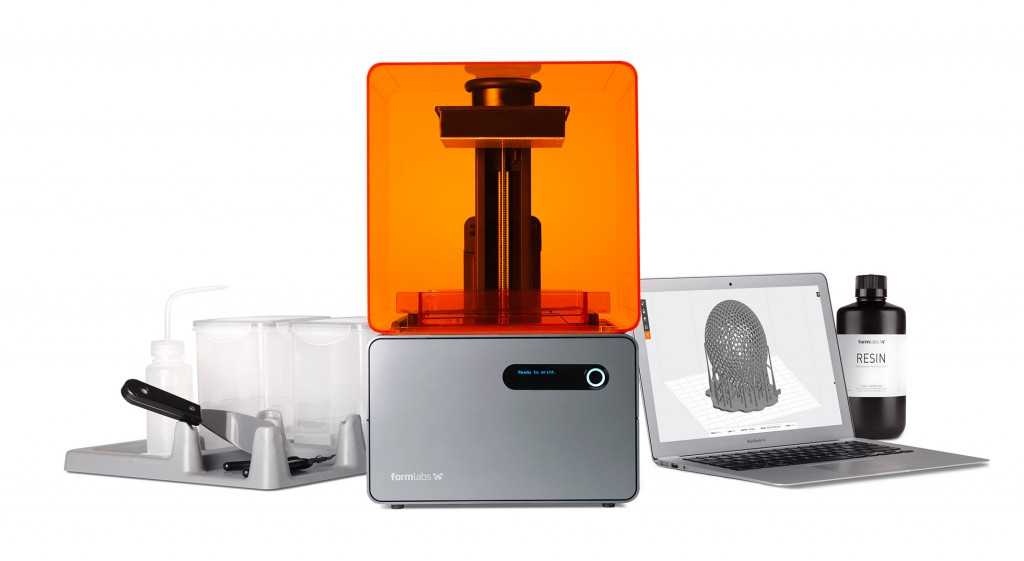 Everyone who has a Form1 or Form1+ (and the number is growing rapidly) loves it like a child. It is one of the coolest looking machines out there and has been since it came out of Kickstarter. The Form1+ stands out as the first low-cost SLA 3D printer on the market, although it has since had to pay some royalties to 3D Systems for a patent breach. Not relying on a projector (using a laser to make each slice instead) means the machine is not dependent on image resolutions and can thus offer higher object detail (20-100 micron) and larger objects (125 x 125 x 165 mm). Formlabs also offers four different types of resins to go with it, including a castable material and the new high strength resin.

In late 2013, 3D Systems decided to bring its trademark SLA technology to the desktop and did so with the Projet 1200, which offers a version of the tech dubbed Micro-SLA, with which all curing and post processing is done inside the machine itself. This means, however, that the tiny Projet 1200 has a very small working area of 43 x 27 x 150 mm. Resolution stands at layer thicknesses of only 30 micron, which is not as high as the Form1+. However, 3D Systems can offer six different compatible materials from its VisiJet FTX range (cast, clear, gold, green, silver, and gray) tailored for plastic prototyping and casting patterns.

Consumer focused from the onset, XYZprinting has now surprised us with some incredibly low-cost products and has always delivered exactly what it has promised. This time around, with the Nobel 1.0, it promises an SLA 3D printer with a 128 x 128 x 200 mm build volume and up to 25 micron layer resolution for about half the price of the Form1+. It also promises to be an almost entirely plug & play stand alone printer thanks to its USB slot and a mechanism to automatically refill the resin as needed. Unlike its FFF sisters in the da Vinci series, it does use generic photopolymer resins.  You can read 3DPI’s review of the Nobel 1.0 here. 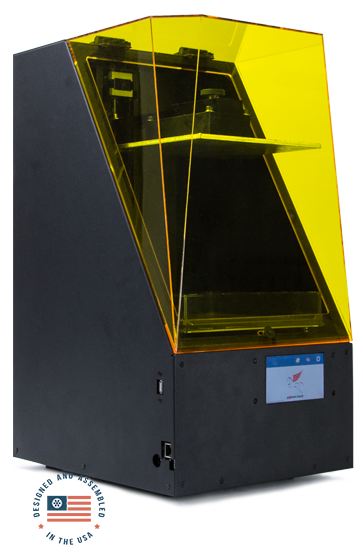 Apart from some exceptions, the 3D printing market seems to belong to the second movers. These are often companies that made specific products that then led them to invest into 3D printing. For example, Las Vegas-based Full Spectrum Laser were laser experts and that led them to develop the Pegasus Touch SLA 3D printer, after raising quite a bit of money on Kickstarter. The machine is available for sale starting at $2,999 on the domestic market and has a build volume of 177 x 177 x 228 mm which is larger than all the machines listed so far. Layer thicknesses stand at between 25 and 100 microns. FSL offers its own calibrated resins including castable, flexible, and several colors; however the machine is also open to generic materials. It’s worth noting that FSL is also in the process of developing two DLP 3D printers, available for pre-order for less than $5,000, as well. 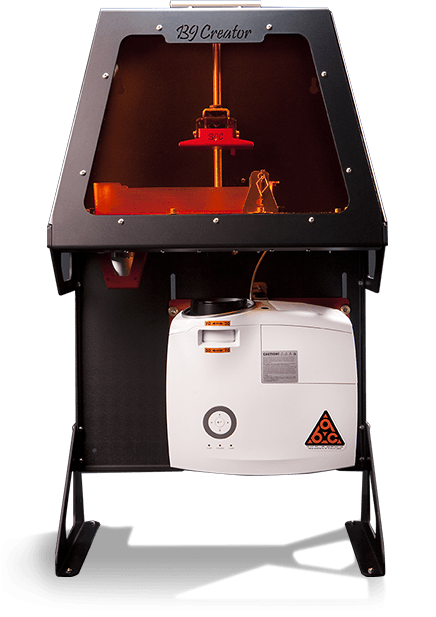 The B9 Creator is on this list both because it is a sub-$5,000 3D printer and also because it was one of the very first commercially available systems to reach this price point. It is based on DLP technology, meaning that it relies on light from a projector, instead of a laser, to cure photopolymer resin. Compared to most of the other printers listed so far, though, it does have a rather small work volume of 57 x 32 x 203 mm. The price is balanced out by the accessibility of its materials which are available in several different colors and with different mechanical properties, ranging between $100 and $200 per 1 kg bottle. The machine is also available as a kit, which drives the price down by about $1,000. 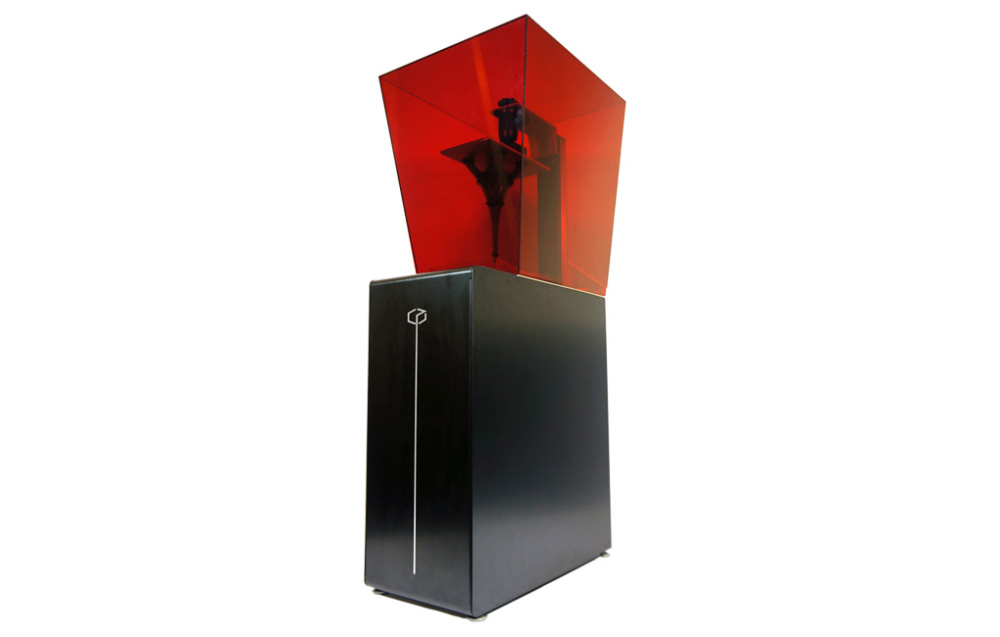 Since we’re now discussing DLP machines, the Kudo3D is one of the most interesting new products on the market. It is built in the US and can offer quite a large build size of 192 x 108 x 243 mm at a price point almost identical to the Form1+. While resolution is a bit more complicated to evaluate for DLP 3D printers (as it is inversely proportional to the size of the object that you want to print) what is most impressive about the Kudo3D, while waiting for the commercial availability of continuous DLP technologies from companies like Carbon3D, is the the speed, which can go up to 1.9 inches per hour on the Z axis for lower Z resolutions of about 200 micron. Another interesting feature is that it is possible to stop the print to change the resin and create multi-color objects.

The Chinese-made UNCIA 3D captured all the headlines when it was announced to be hitting Indiegogo at $299 (which helped it hit its goal in only four days), an incredible price even for a no frills, no thrills machine. Even now, at $1,379, it is probably the lowest priced DLP 3D printer on the market that ships with an integrated projector. It has a build volume of 102 x 77 x 170 mm and a 100 micron maximum resolution. 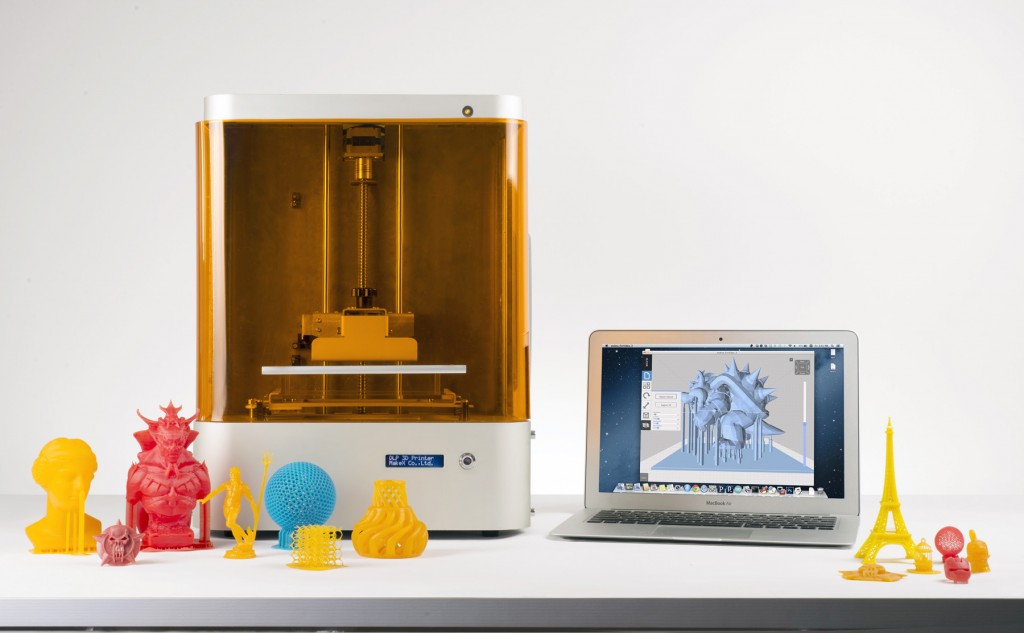 Also out of China, but based on open source technology, the Makex M-One is another one of those DLP 3D printers that comes with the option of having an integrated projector or as a stand alone kit that can use any projector. Either way, it comes in at below $5,000, with the HD projector package priced at $3,999 and the low-res projector package at $2,899 (with more expensive Silver and Black Set options also available). The M-One can attain a maximum layer resolution of 15 micron with a maximum build volume of 145x110x170 mm. It also comes with its own Maker slicing software (which is a free download for both Windows and Mac). 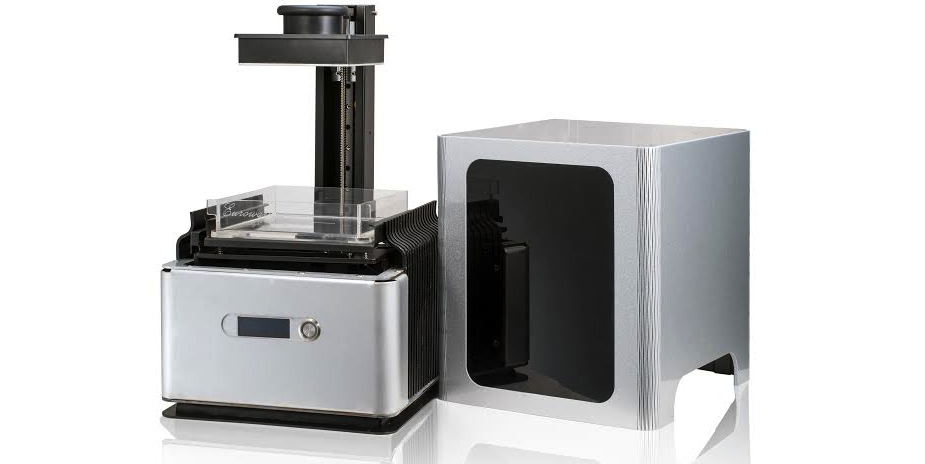 Much like the more well-known XYZprinting, China-based CTC has gone from FFF 3D printers to developing its own SLA 3D printer, which hit the market at a similar price point as the Nobel 1.0 at $1,480. Compared to the Nobel 1.0, the Riverside Photocuring 3D Printer (this is its official name) has a slightly wider and yet slightly shorter build volume of 135 x 135 x 180 mm and can achieve  minimum resolution of 100 micron (although higher resolution levels are not specified). It supports Cura as a slicing software and can be shipped from CTC’s local warehouses in USA, UK, Austria and Germany.

Stalactite is a startup based in Barcelona and is also the only company on this list that is based in Europe. It is also, arguably, the one that has the nicest website, right up there with Formlabs, which always helps. The Stalactite 102 3D printer, which hit Indiegogo in early 2014, is a DLP system with a max build volume of 102.4 x 76.8 x 180 mm and it retails for €2,895. The machine can achieve a laser resolution of 25 micron and it also introduce a novel approach to DLP technology that allows the last cured layer to detach from the bottom surface of the tank without de-calibrating the printing process. Like Formlabs, Stalactite 3D also offers four different materials: Casty, Elastic, Standard, and Prototyping photopoymer resins.