A Very Noble 3D Printer: Reviewing the Nobel 1.0 from XYZprinting

In addition to being a writer here at 3DPI, and all my other activities, I run the 3D Printing Economic Research Center (3DPERC) at Korea Maritime & Ocean University in Busan, South Korea. The center’s function is to follow, study, and analyze the advances in additive manufacturing and to use the data collected for the benefit of the university and its students. 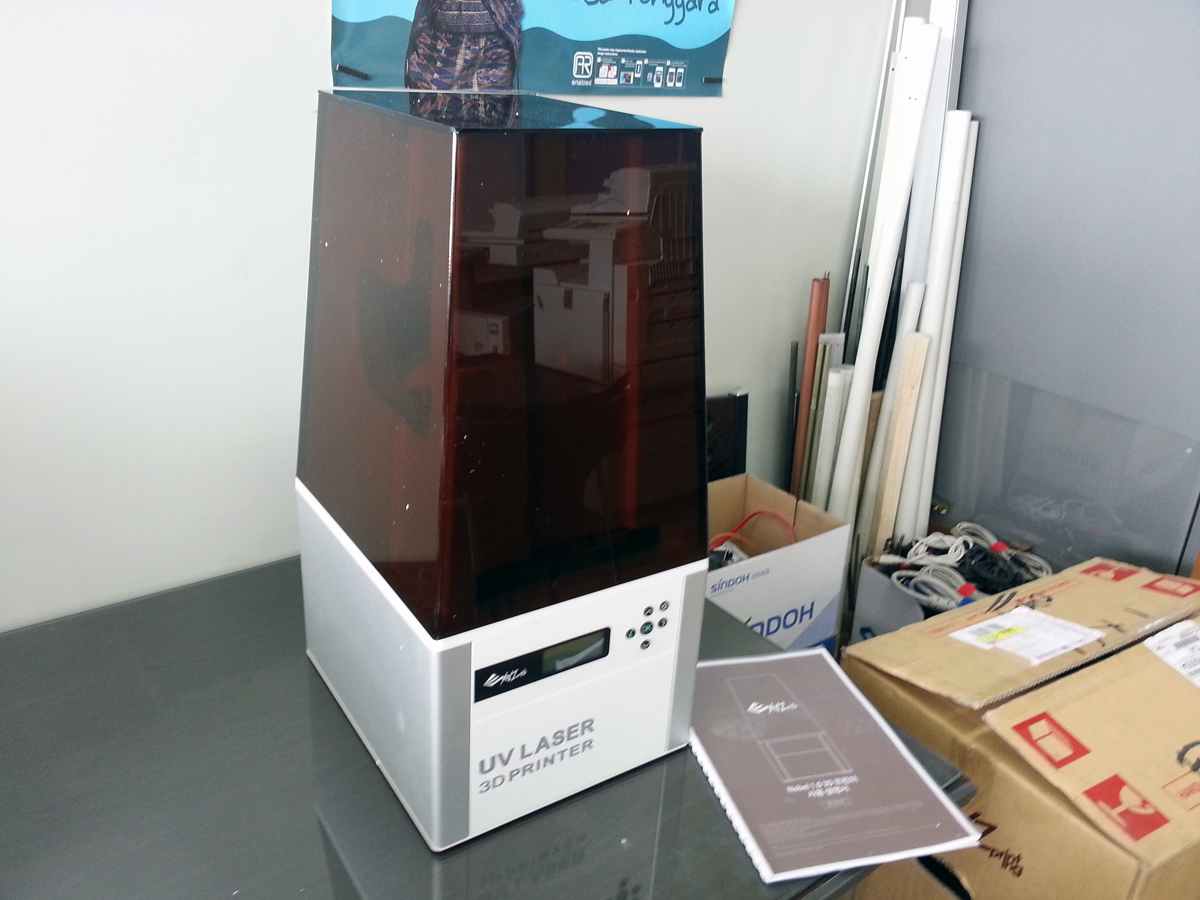 As part of our diverse activities, we sometimes review new hardware or software, and recently XYZprinting  was kind enough to allow us to review their new SLA-type desktop printer, the Nobel 1.0. We would like to thank Mr. Simon Shen, CEO of XYZprinting personally for making this review possible. XYZprinting introduced the Nobel to the Korean market back on April 7th and it is currently available throughout the country and retails for a little less than $1,500 USD based on current currency conversion rates. 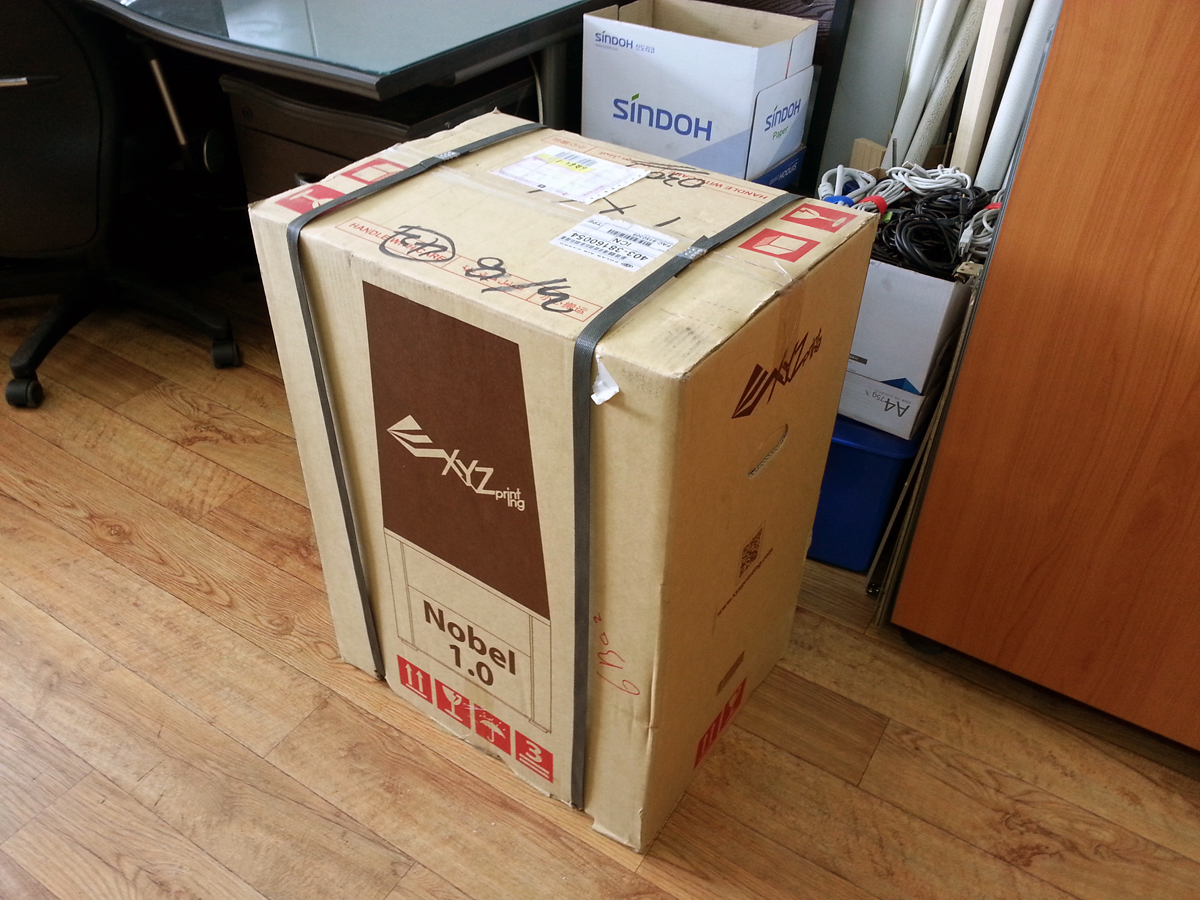 The opinions and observations that follow are those of my research center’s staff following a month-long test period using the Nobel 1.0 under ordinary conditions. The center’s staff consisted of faculty and undergraduate students, most of whom had no experience using an SLA-style printer before. As a result of this, some of the opinions and observations, while sounding a bit negative, are meant more as cautionary comments to users who may have been misled into thinking that an SLA printer is an “upgrade” from an FDM printer… it is not. An SLA printer is an entirely different type of machine with a completely different set of strengths and weaknesses from the more common FDM machines. Taken in this light, it is our hope that readers will find this review beneficial. 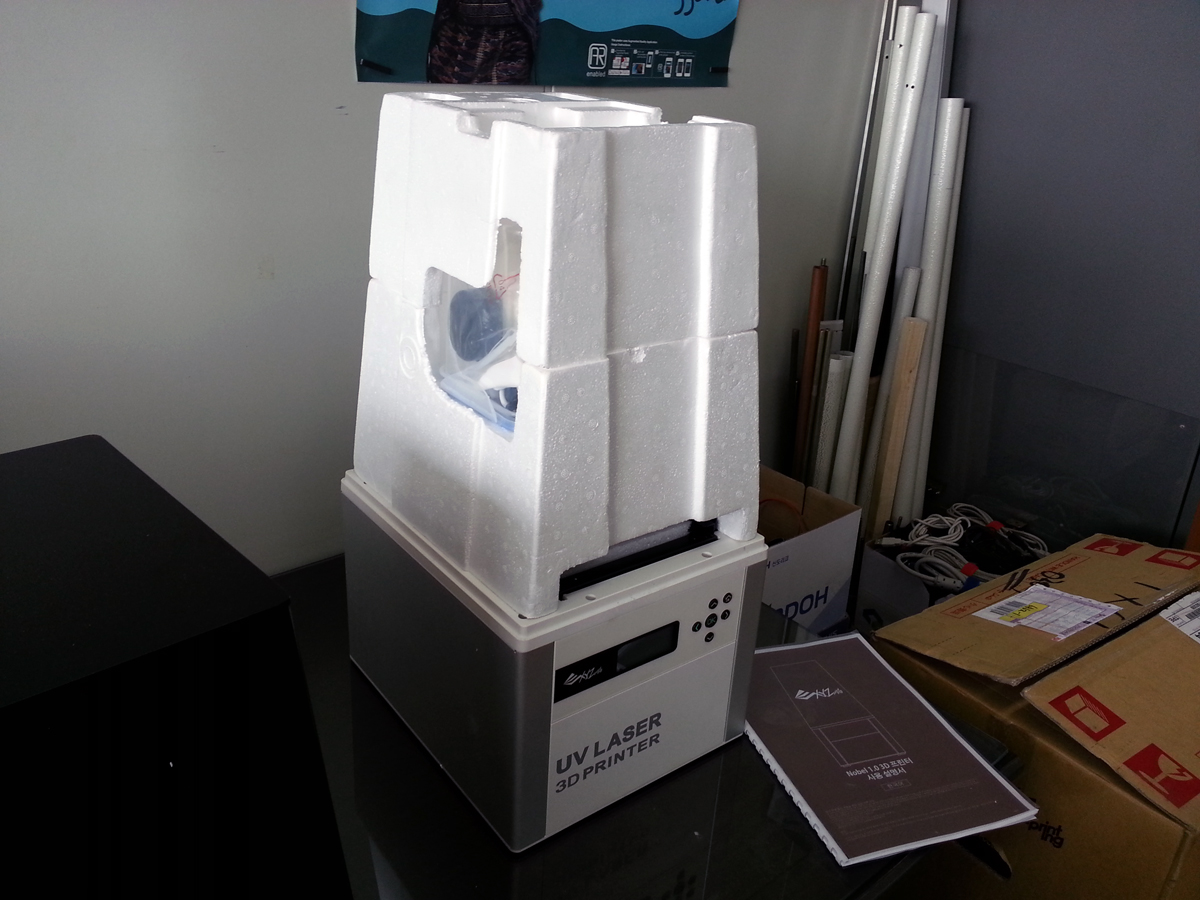 Our review begins when the Nobel 1.0 SL arrived at our lab. The Nobel was packed as well as we had ever seen any large item packed. There were no loose items banging around, everything was packed in a manner that indicated great thought had been given to the shipping process. Unpacking the machine, we set it up on an empty glass-topped desk, and read the enclosed Korean instruction manual carefully. The manual was well written (in Korean) and explained everything in clear language and had appropriate illustrations and photos to assist.  We also downloaded the English version from XYZprinting’s website and found it to be likewise complete and well-written. 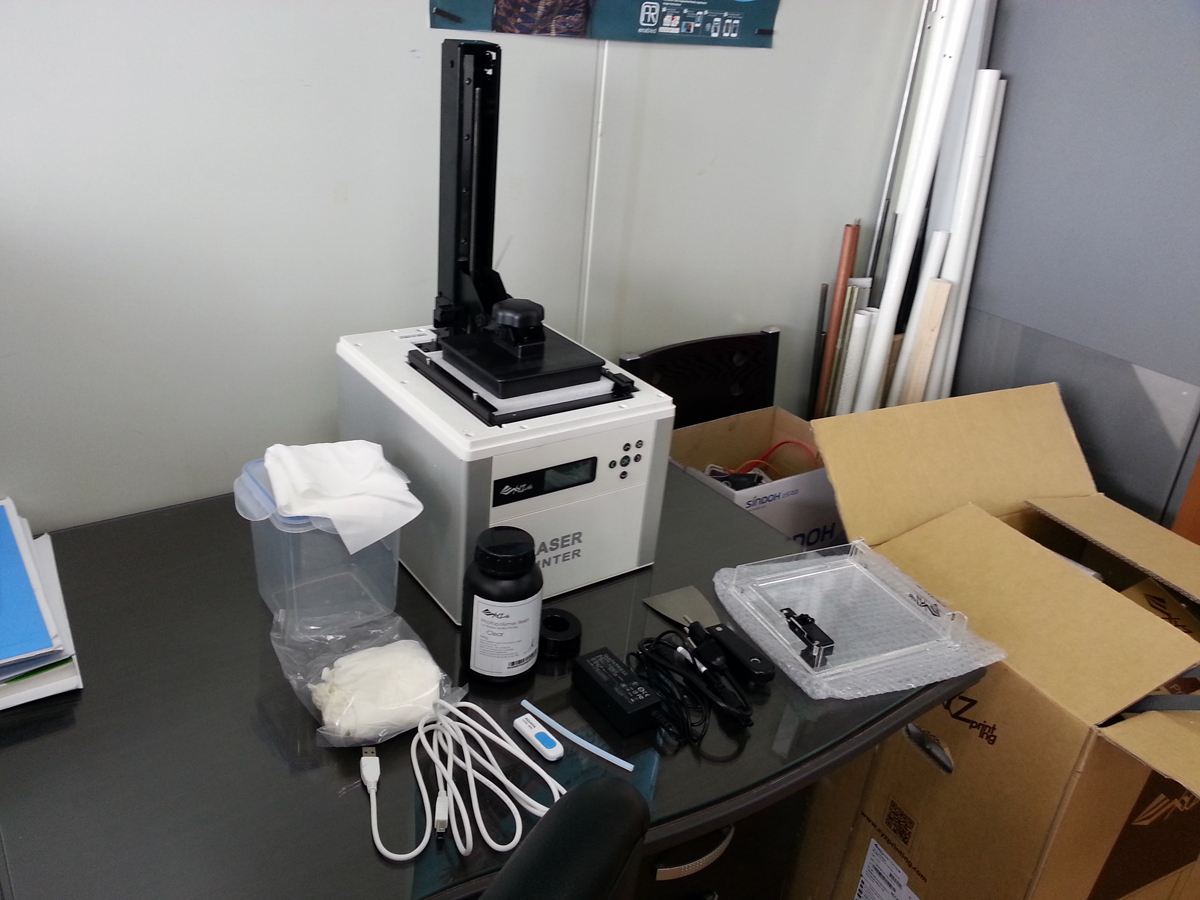 The basic specifications of the machine are very reasonable for a desktop device. Its overall size was 280 x 337 x 590mm and had a build area of 128 x 128 x 200mm. When unpacked, it consisted of 7 main parts; the machine, the build plate, the resin tank, the machine cover, the power cord, the 500ml bottle of resin, and the resin adapter cap. In addition, several other items to help make the printing process safe and easy were enclosed, including a wash container, a scraper, polishing clothes, rubber gloves, a USB cable, an 8GB USB stick… and even a plug adapter for the power cord. 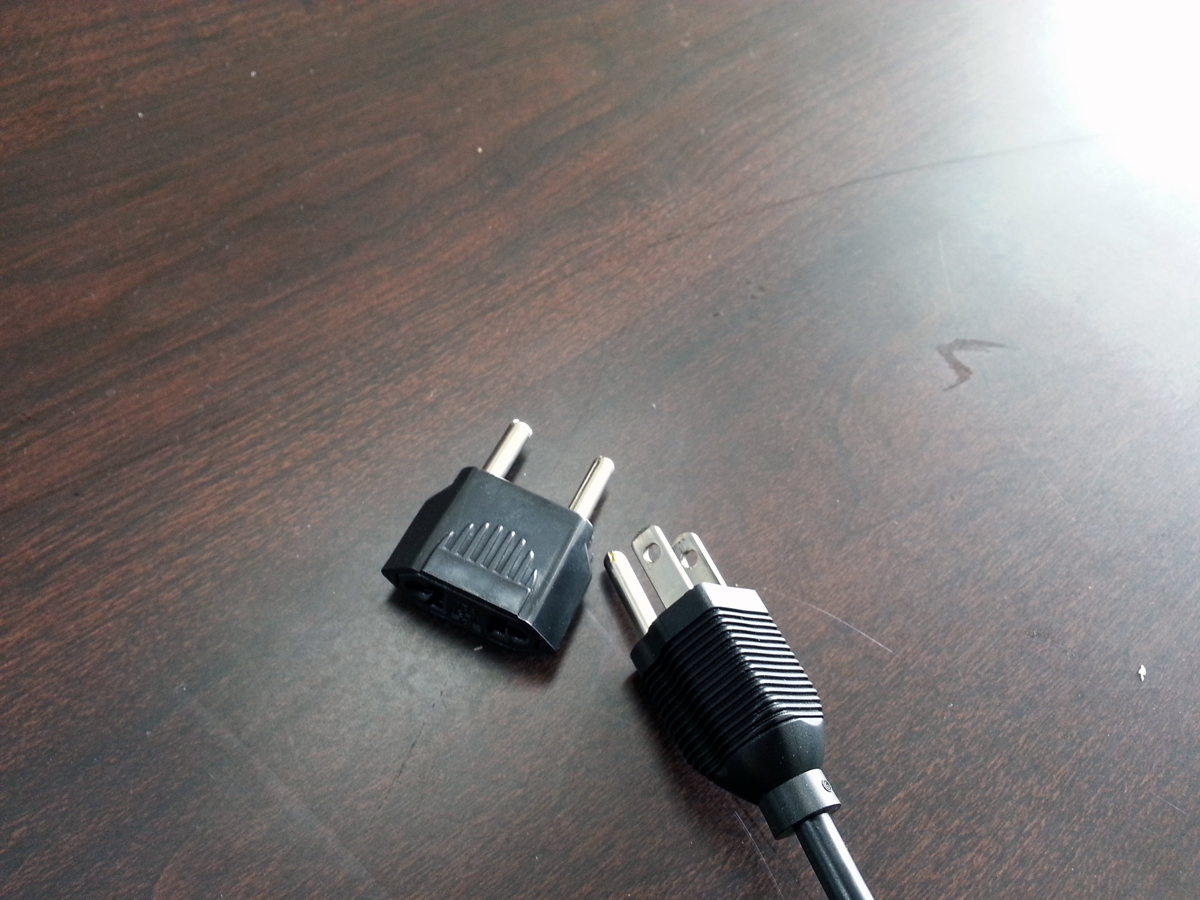 Setting up the machine was ridiculously easy. All the necessary parts fit together as one would expect, and the only “technical” operation necessary to perform before printing was what was called a “horizontal calibration.” This is to assure that the build platform is parallel to the resin tank and consisted of loosening 4 large adjusting screws above the build platform, letting the machine lower the platform until it is flush with the resin tank, and then tightening the screws again.

While all the forgoing was happening, other team members went about downloading XYZprinting’s slicer software and installing it for us on one of our computers, and giving it the “once-over” to see how easy it was to use. We used a Windows-based PC, and the slicer was fairly straightforward and about as difficult to use as MakerBot’s Makerware… which is to say that it was pretty easy.

We started by printing a couple of test print files that came on the USB stick, and then moved on to more ambitious objects.   We printed items at resolutions from 0.100mm (100 microns) all the way down to 0.025mm (25 microns) and, though the machine performed well, it was at this point that we began to discover some important issues. Some of these were the result of the dynamics of the liquid resin technology, some of equipment and tool issues, and several others of user error. 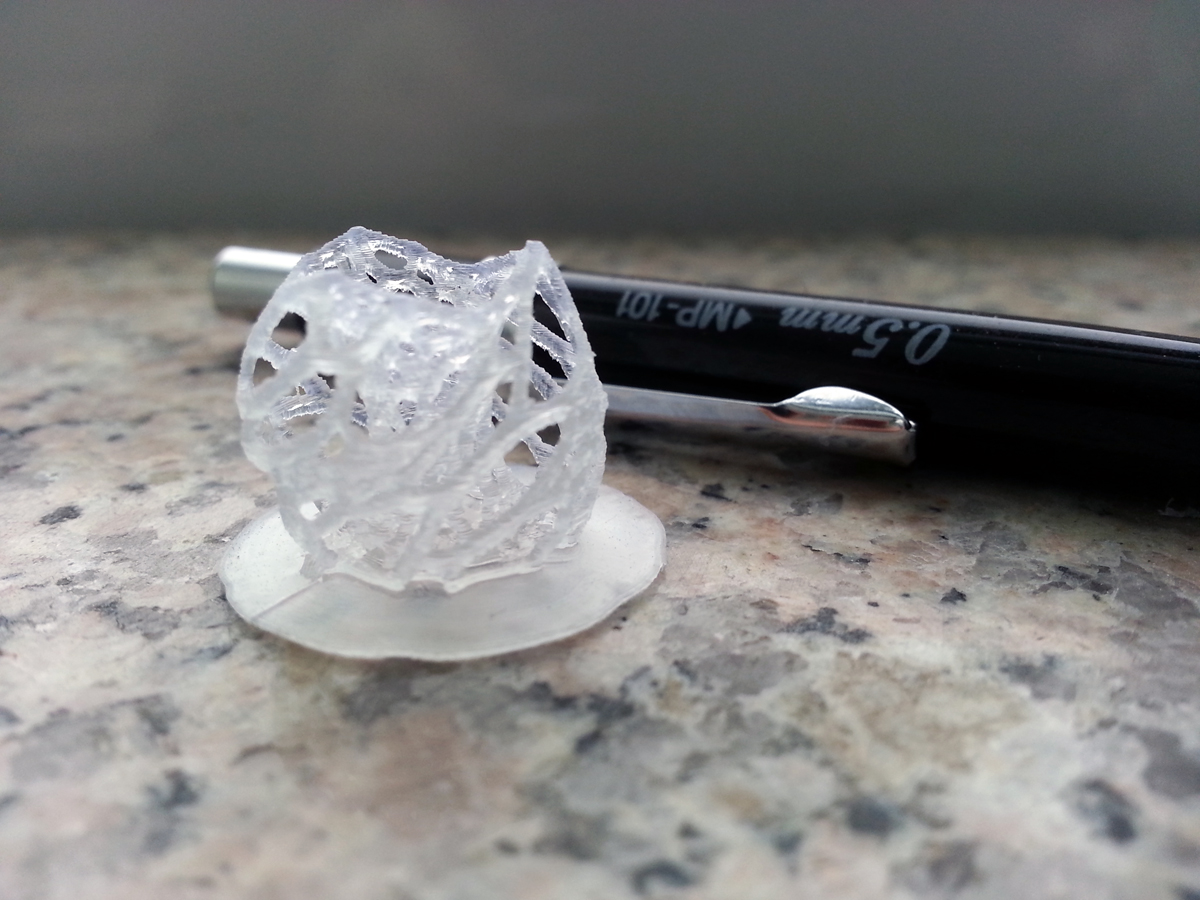 The first issue we noted was that the liquid resin machines (SLA/DLP) are inherently messier than the FDM/FFF machines most users are accustomed to. The liquid resin is… well, a liquid, and a sticky one at that. Its viscosity adds to the problem of handling and working with it, as it can be difficult to pour, clean up and control. Think of working with something like honey, except it is completely inedible and has a slightly unpleasant smell. It is alcohol soluble, so have plenty on hand for cleaning up your prints, the machine, and wiping down your workspace. It should not be used in any room that has carpeting, children, pets, or any source of air-borne dust, fibers, or other contaminates, as you will find these contaminates in your resin tank at some point. You will also end up having to replace your carpeting, lest you want to turn your workroom floor into a giant glue-trap.

The next issue is that the resin is fairly expensive and the Nobel requires you to use XYZprinting’s own brand by use of some sort of sensor in the resin bottle that the machine detects. Many people object to proprietary systems, and I am one, but XYZprinting’s CEO did give a reasonable explanation for the proprietary aspects of their products. When 3DPI’s David Park interviewed him back in early April, he said that it is an effort to control the variables related to inferior after-market supplies and to ensure that XYZprinting’s customers have as trouble-free a printing experience as is possible. While we accept this explanation as valid, we were still disappointed in the fact that the resin was so expensive and didn’t go very far. We only managed to print out a few different models before the resin bottle was empty. And then we were done. We hope that as XYZprinting’s brand and product lines continue to expand, that prices will come down as well. 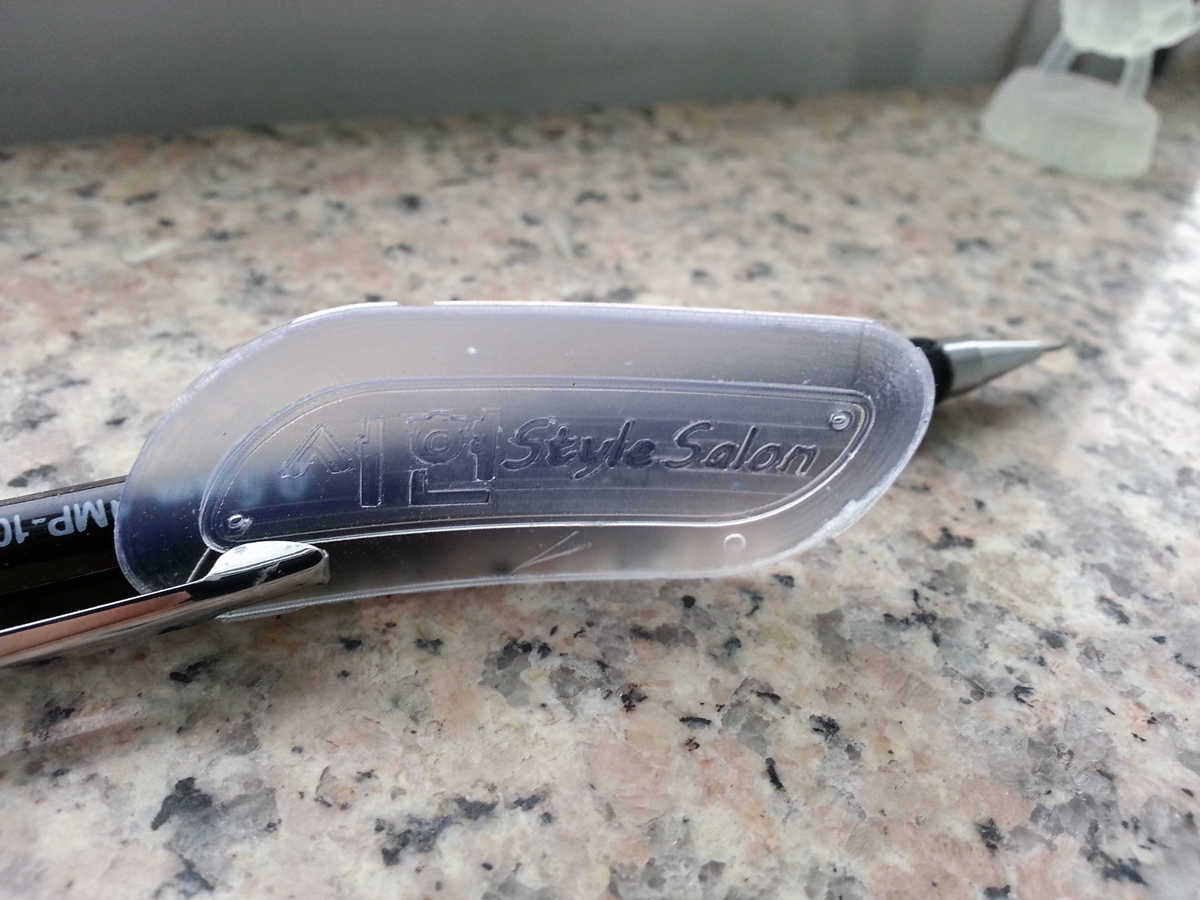 In addition, the operator’s manual recommends not “mixing” resin colors in the same resin tank, but to use a different resin tank for each color of resin used. While we employed only the single clear resin supplied with the machine, it doesn’t take much to imagine a user wanting to change colors, and having to purchase (and carefully store) several different resin tanks, one for each color they use. Most users will likely be limited to just a few, if not a single, color of resin for all of their models simply due to the hassle and expense of trying to use different colors. And you don’t want to even think about what happens should the entire resin tank accidentally cure…. You are, after all, dealing with a UV-sensitive liquid plastic designed to harden into a solid object.

Another issue related to the resin tank is its eventual replacement due to normal wear and tear. On this machine, and others like it, the laser is placed below the resin tank and shines up through the tank bottom. The tank is made of a polymer and its interior is covered with a thin layer of silicone to help prevent the prints from sticking too tightly to the tank bottom. Over time the silicone will wear away due to normal, repeated use. In addition, over time the tank bottom will develop “cloudy” zones or spots where the laser has repeatedly shined through the same spot over and over. These cloudy spots will interfere with the laser’s resolution, eventually causing prints to fail. The manual recommends that the resin tank be replaced once 2/3 of the tank bottom has developed these cloudy spots, but depending on the accuracy required by the user, it may have to be replaced more often. 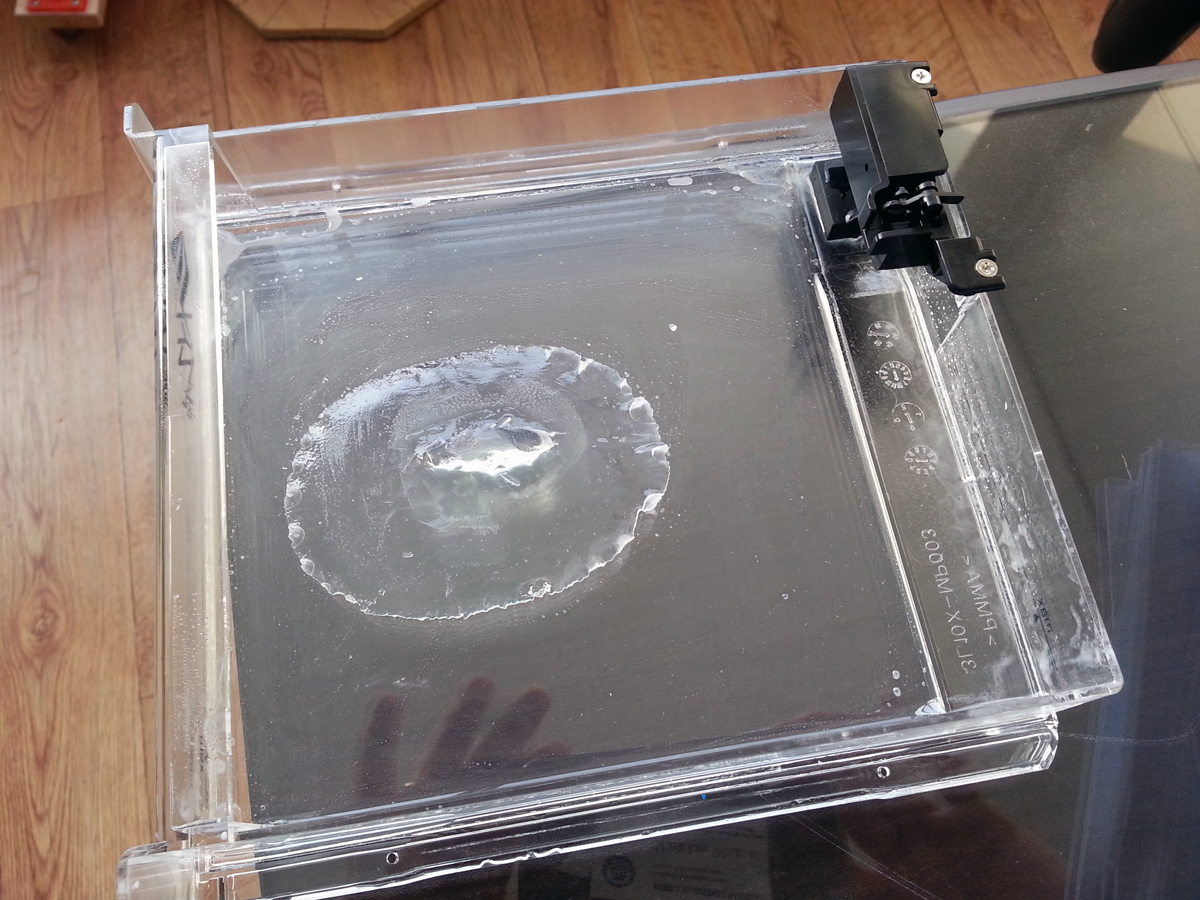 The last resin tank issue came about when, for reasons we could not determine, the machine “froze up” during the printing process and left the laser on, shining through the same spot for significant amounts of time. The only solution seemed to be turning the machine off, discarding the failed print, and beginning again. While anyone who has used any type of 3D printer understands that things like this are part and parcel to the printing process, with a laser-equipped machine there were some effects that you don’t see in other machines. When an FDM machine goes off the rails on an overnight print, the operator is typically greeted in the morning by a box of plastic spaghetti to throw away.

When the SLA machine had its overnight print fail, its laser would freeze in a single spot and fail to turn off. This caused the laser to “burn” the resin tank bottom, creating a very small, but very dense, “cloudy” spot as well as creating a resin “clump” in the tank which could be a real mess to clean up. During our 30-day testing period, we had four such failures – one of which created a resin clump so large that the entire resin tank had to be removed and drained in order to get the machine up and running again. 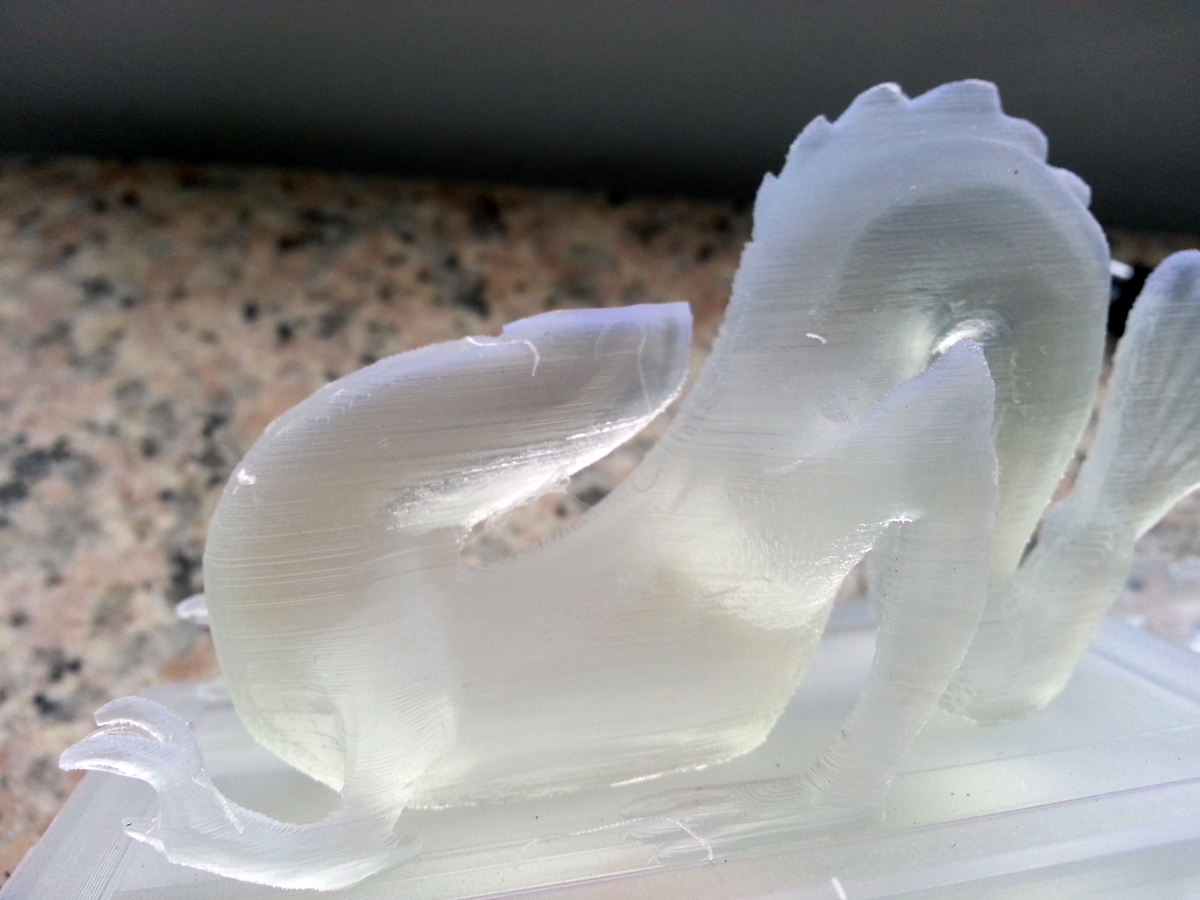 So, in summary, while there were some performance issues, most of these were related to the liquid resin and are not any fault of the machine itself – and those issues that were attributable to the machine were relatively minor events, and their occurrence was actually a bit lower than similar failures of our FDM machines. The slicer software is straight-forward and easy to install and use, and works on both Windows and Mac machines. 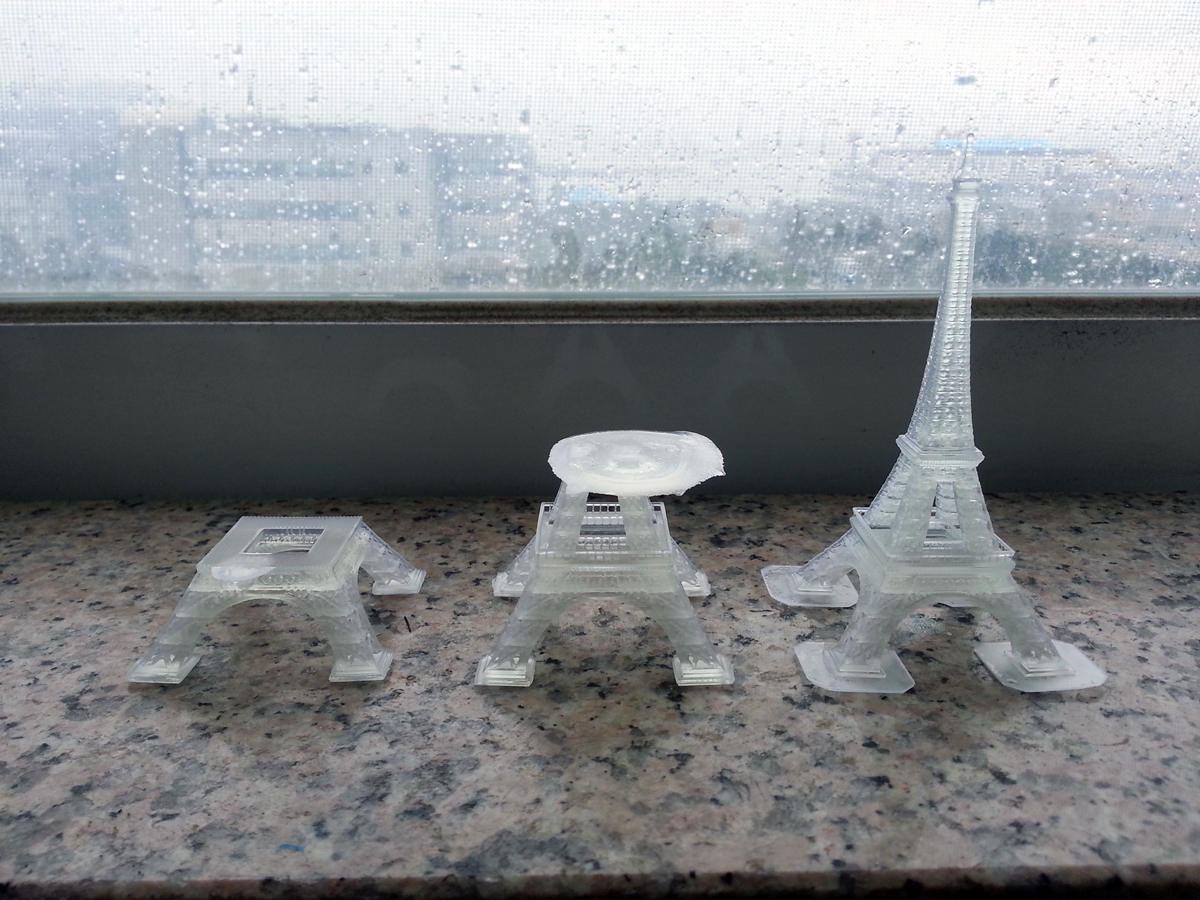 While the messy nature of the process does need to be considered, for those who have a need for small, highly-detailed models – and are willing to provide an appropriate workspace for the machine – these troubles should be relatively small. As a result, it is our opinion that the Nobel 1.0 is a great machine! We cannot stress how impressed with it we were, both because of its performance and its amazingly affordable cost, resin price notwithstanding. It was only a few months ago when you could not even hope to touch an SLA machine for less than $5,000USD and now XYZprinting has dropped that price to less than $1,500USD! Now that this evaluation is over, we wonder what XYZprinting is working on next, and will wait in anticipation as they have shown they are clearly a very serious player in the 3D prosumer market! 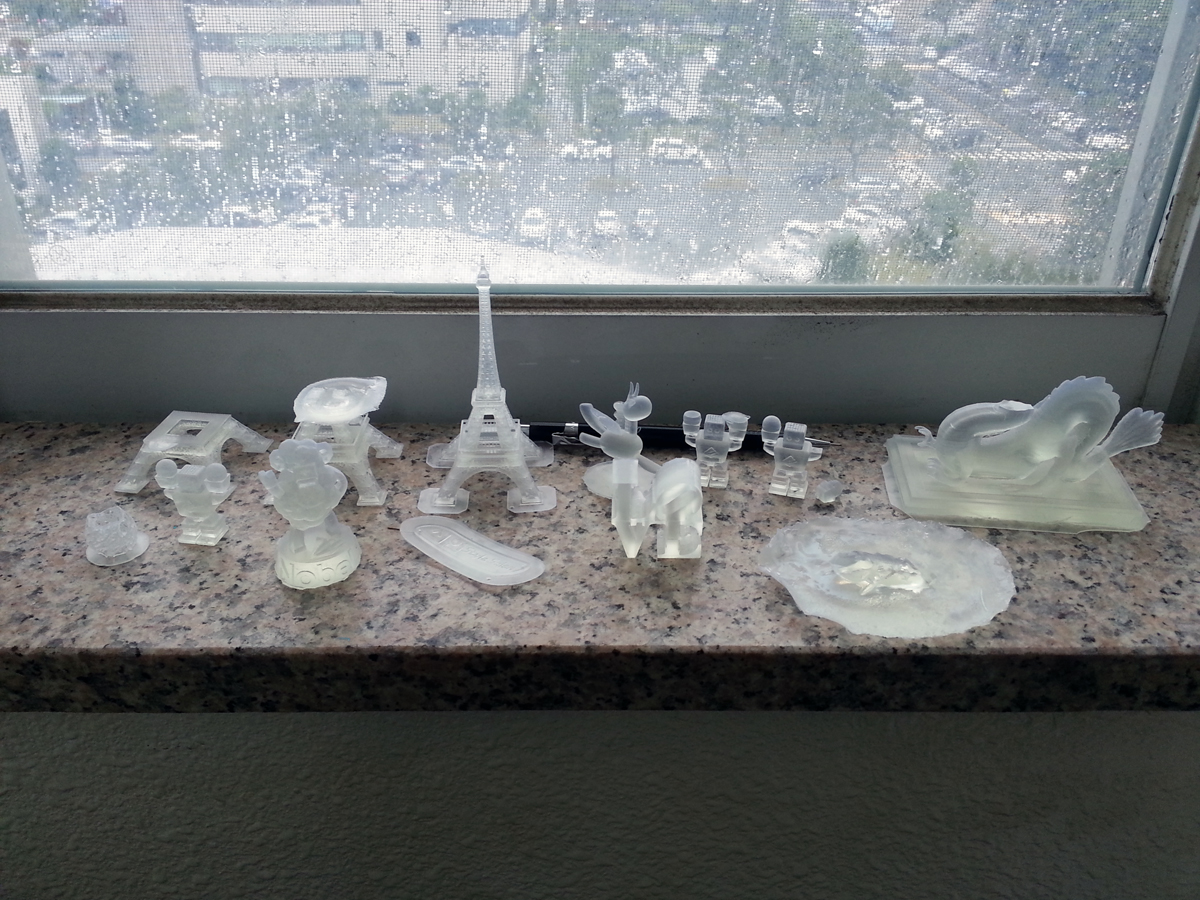