As amazing as the possibilities that 3D printing can open to those with visual disabilties are, they are not new. A few museums across the world have been gearing up to offer 3D replicas of their artistic collections, whether they be sculptures or even paintings that are to be “3D’ed” first and then 3D printed. Allowing blind people to “see” the works of art through touch is, however, only one part of a process that aims to overcome disabilities through technologies, allowing anyone to experience art in alternative ways.

What is still missing from the 3D models is a fully interactive system to add explanations to the tactile experience. Such a system has just been tested by an Italian innovative start-up company called Tooteko, co-founded by Serena Ruffato, Master in Digital Architecture from IUAV Venice. Based on her final thesis, “Architecture and the visually impaired: Rapid Prototyping for the integration,” the Tooteko project is also co-founded by Fabio D’Agnano, Coordinator of the Master in Digital Architecture at IUAV, Venice, who has over twenty years experience in solid modelling and prototyping. Their common goal is to integrate interactive sensors within the 3D replicas to reproduce vocal explanations and descriptions of the works being observed through touch.

“We started from the 3D models that are already present in certain museums throughout Italy, such as the Francesco Cavazza Institute for the Blind in Bologna and the Omero Tactile Museum in Ancona – says Serena – and decided to add vocal explanations, something that no one had ever done before.”

Tooteko’s main goal is to make artworks more accessible through the use of technology. 3D printing plays a big part in it but the company is technologically agnostic, meaning they are only concerned with achieving their final objective and Serena said they will use any technology that will help them in that direction. In most test cases, however, interactivity is achieved through capacitors that sense a person’s touch and activate transmission of the audio content to a set of smart-headphones. 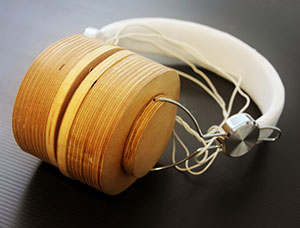 The headphones automatically link to the model and receive the digital information. The first Tooteko Art prototype was recently presented in the US; now the next step for Tooteko is to find sufficient funds to begin the beta testing phase in standard-access structures such as the Archeological Museum in Venice. Once the funding is in place, Tooteko will develop a few 3D printed replicas and apply their technology in stress tests.

Replicas can be exact or miniaturized. Objects that are too large need to be shrunk to fit a person’s full arm extension just like objects that are too small, such as coins, could be made larger to allow for a smoother and easier touch interaction. “Now we are looking for new technical partners to replicate at least 10 works form the Archeological Museum in Venice,” says Serena. “We are talking both with local and foreign companies for support in 3D scanning, 3D printing and for integrating the sensors. 3D Scans are probably the most difficult and costly aspect to cover while 3D printing is achieved through the support of HSL, a professional rapid prototyping company based in Northern Italy with years of experience in many industrial sectors. Then of course there are the Museums, that in many cases just cannot wait to be able to integrate our systems.”

Considering the extent of Italy’s artistic patrimony and the project’s potential in truly democratizing art at a global level, the Tooteko team has a lot of work in front of them. The results could be very exciting indeed.