3D printing has made it to the world of TV infotainment, with MAVTV, the one and only network devoted to an “action-oriented family audience”, having launched TITAN American Built, a series about machine shop owner Titan Gilroy’s attempt to re-shore US manufacturing. The show sees Gilroy demonstrate America’s manufacturing capabilities with high-tech CNC and 3D printing technology.

Through work with his machine shop, Titan American MFG, Gilroy works with his team to create intricate parts using, along with other equipment, a Fortus 250mc 3D printer from Stratasys, through US-reseller, GoEngineer.  The show’s host describes how 3D printing was featured in the first episode of the series, “Episode one highlights our shop using 3D printing in order to manufacture thermal night vision scopes for IR Defense – it’s amazing. Time is the real currency of this industry, and because creating fixturing components is an art, it demands a lot of time to manufacture intricate parts. Instead of waiting two weeks for final product, we can design and create a prototype in just one day with this 3D printer, it has taken our shop to a higher level of efficiency and precision.” 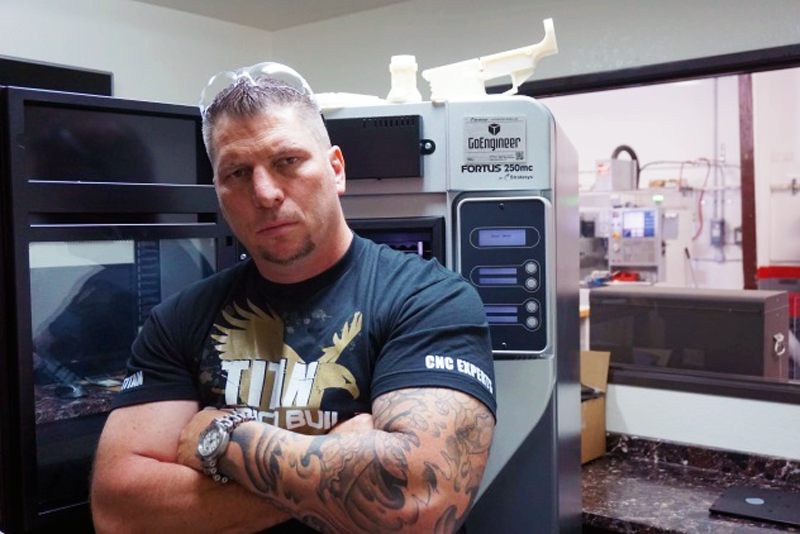 President, Stratasys North America, Gilad Gans, relays his feelings about the show, which aired on October 24, “3D printing is changing the way the world is manufacturing and we are thrilled to partner with Titan Gilroy and show America what is possible when incorporating 3D printing into your overall manufacturing process.”

Ken Coburn, president and found of GoEngineer, explains why his company decided to co-sponsor the show, “I met with Gilroy to discuss the show earlier this year and immediately knew I wanted to help support his passion for educating America on the significant role of manufacturing in the United States. Gilroy recognizes that leveraging new technologies like 3D printing in the right circumstances can help companies gain back the competitive edge needed to help them compete in a constantly changing global economy.”

If you can’t wait to watch TITAN American Built, it airs Fridays at 7pm PT/ET on MAVTV. You can catch it on Channel 248 on DISH, Channel 214 on DirecTV, an Channel 810 on Verizon. Until Friday, watch the promo video below: