Thing Tracker — A Proposal for a Decentralised Network of Things

During the last few weeks Gary Hodgson has been developing an idea — a new way to share designs, projects and “things” within the maker community.  Last week he shared his initial proposal with the 3D printing community group on Google+ via an information website Thingtracker.

Gary is at pains to stress that this is really just a starting point to promote discussion, with the hope that the whole community can provide input that will result in a ‘decentralised Network of Things’. But even from this starting point, not to mention the input that the thread has received already, this is a hot topic and one that is designed to create a non-proprietary space for sharing ideas centred around open making, and more specifically, open source 3D printing. As starting points go, this is very well thought out, with consideration given to rationale, method and results.

The rationale is logical, but takes into account that there will be issues:

“Makers like to share their creations, but choosing where to share their work, so that it is discovered by the right people, can be prove difficult. Anyone wishing to build a creation-sharing service has a Catch-22 situation: people won’t use the service until it’s deemed popular enough, yet it won’t become popular without people using it. Groups and individuals may wish to host their own designs, yet make them discoverable to a wider audience.

In terms of methodology, “instead of being another content sharing service, [Thingtracker] describes a proposal whereby existing, and future, services could share their data in order to create a web of things. By sharing key metadata, services could work together to form a truly decentralised network, where participants focus on their individual needs and yet be sure their content can be easily discovered, and tracked, by the wider community.”

And the results will obviously depend on input and implementation.

The motivation is strong, in Gary’s own words: “I can envision a future where people can develop apps and tools that hook into the Network of Things and offer all kinds of services: search engines; boutique object repositories; personalised lists; and so on — all open and decentralised. Pretty idealistic perhaps, but still pragmatic enough to become reality.”

Currently based in Germany, Gary is a programmer and a RepRap enthusiast. For any readers wondering about his credentials, Gary produced the Prusa Mendel Visual Instructions, collated the RepRap Developer Bookshelf, and curates reprap.development-tracker.info. 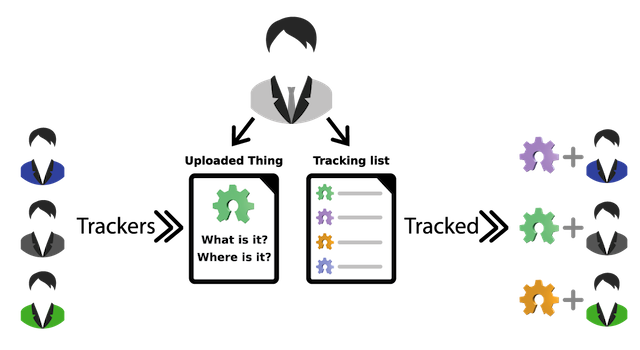