There are hardly any void spaces left in our physical world, where 3D printing hasn’t at least attempted to leave its footprint in some way and the world of sports is no exception to this. Most recently, 3DPI’s Rachel Park reported on customised 3D printed sports equipment assisting and enabling the Japanese fencing athletes to achieve podium places in the London Olympics last year. However, as sport is not always clearly distinguishable from art, not every 3D printed sports related application is purely performance driven. However, the Queen’s Baton, the equivalent of the Olympic torch is not entirely all style with out substance — it will soon be starting a long, 118,000 mile journey —  before arriving at the 2014 Glasgow Commonwealth Games. The baton was definitely designed with the ambiguous concept of eternal beauty as the process’ core. That challenging paradigm is something that the team of designers and companies behind the beautiful work of art really did achieve and bring from the design screens to the real world. Much of this is due to the 3D printed titanium lattice frame atop the Queen’s Baton. 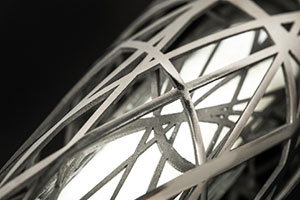 3T RPD is a 3D printing service provider in the UK, that was commissioned to manufacture the lattice for the Queen’s Baton designed by 4c Design, a Glasgow-based design agency responsible for the baton’s overall form. The design paradigm had its roots and inspiration in the locality, celebrating the city’s artisan-oriented past and local nature. Also as in nature, the baton includes four distinctive elements that make up for the design entity. The handle is the lower part of the baton and is made from Scottish elm; while the top part of the baton is a combination of the 3D printed titanium lattice frame — 3D printed using the laser sintering process — and a granite gem. To create the finishing touch, the baton also includes a message from the Queen herself – eventually unveiled and illuminated from within the baton – which will undoubtedly celebrate the spirit of sports in a dignified and respectable matter.

The baton – which is surprisingly large I might add – was recently unveiled to the public for the first time before going on its 288 day journey around the participating nations and ending up back in Glasgow in time for the opening ceremonies of the games on 23rd of July next year. The BBC covered the unveiling event and included a short video about it, which you can watch by hitting the BBC link below.