With the recent atrocities committed in Newton, Connecticut and Aurora, Colorado, it’s only natural that the most prevalent news surrounding 3D printers — particularly in the US — has been about the group Defense Distributed, which is in the process of creating a database of open-source CAD files for the printing of guns.  The group has already printed a functioning AR-15, the civilian equivalent of the M16 assault rifle, and plans on printing more.  The group’s mouthpiece, Cody Wilson, has even acquired a gun manufacturer’s license to circumnavigate current gun laws.

As a result, friends and family members e-mail me or write on my facebook wall about the topic, posting links to articles about Defense Distributed and the 3D-printed gun.  After my fiancé, Danielle, told her barber about my writing for 3DPI, an elderly woman nearby, remarked, “Those things are terrifying. Did you know they can print guns?” squinting at Danielle like a store clerk warily watching a gang of James Deans.  So, as the technology makes its way from major manufacturers into the lives of us plebeians, its consequences on our lives becomes more important and the number one question for most people becomes, “can it kill me?” The question after that is “how can I keep it from killing me?”

After seeing Defense Distributed’s YouTube video of the working AR-15, United States Congressperson Steve Israel believes the answer to the first question to be a firm, “yes”, and is seeking to reinstate a 1988 ban on undetectable firearms, which is set to expire in December 2013. The act makes it illegal for individuals to carry or manufacture guns that would not be picked up by airport metal detectors. Israel, however, has said that he does not want to legislate 3D printing itself nor does he wish to legislate large manufacturers. He told Forbes that the actual sharing of CAD files would not be illegal, which raises some questions about how the law would prevent the printing of firearms. He’s also said that he wishes to avoid SOPA-like legislation that would keep specific search terms from popping up on Google. This would leave one final option: placing locks on 3D printers that would keep the machine from printing illegal files, to which most Makers building their own printers would laugh. More importantly, for Defense Distributed, the law is only geared towards “lone wolf types”, as Israel calls them, and not major manufacturers. So, what could the law do in the face of Defense Distributed’s manufacturer’s license?

Chris Anderson, former editor of the US branch of Wired, points out that fearful reactions to the news of the 3D-printed firearm may be a bit exaggerated, saying, “3D printing is a terrible technology for the working components of a gun. There is no tensile strength. It would blow up in your face. You can buy guns in Walmart — they are not a scarce product. And if you want a good barrel you can go and get a bit of plumbing from the store.” I would think that Anderson, as an additive manufacturing aficionado, would have a bit more foresight and recognize that, as most Makers and investors assume, the technology is only going to increase in quality and accessibility and decrease in price, meaning that, while 3D printed guns are not much of a threat at the moment, it is worth considering what sort of danger they may pose in the future. And, for Cody Wilson, of Defense Distributed, the project is less about practicality and more about ideology.

Through the power of the Internet and the sharing of open source information, Cody Wilson hopes to do to gun regulation what the Pirate Bay did to copyright law, blowing the 2nd Amendment debate to smithereens. To an extent, he may actually be able to do so. By creating a free database of CAD models for the printing of weapons and even going so far as to acquire a manufacturer’s license, Defense Distributed has already poked a number of holes in the ideas behind gun legislation, the biggest hole being that, by printing guns, it would be possible to get around any potential waiting times or background checks required by state and federal laws.  And, until Israel can figure out a way to monitor and control 3D-printed arms specifically, the over 10,000 people who have downloaded files from Defense Distributed’s site will be able to arm themselves free of state regulation. So, why would anyone want this to happen, let alone sit at the wheel of unleashing printable guns onto an already deranged civilian population?

Cody Wilson, like many firearm advocates, is fuelled by modern libertarian thought. Unlike most gun advocates, however, Wilson has also become absorbed in postmodern critical theory. Watching his YouTube videos, one can see the young law student, with a voice like Ryan Phillippe in Cruel Intentions, referencing intellectuals like Žižek and Foucault and talking at great length about the freedom of the psyche from state and social control. To Wilson, the 2nd Amendment is the last form of defense the individual has against an oppressive government and society.  While the merits of armed struggle against a violent despot are arguable[1], based on his YouTube lectures, Wilson has a more abstract form of tyranny in mind. For him, all social contracts are an attack on the freedom of an individual. So, speed limits and seatbelt laws prevent the individual from making the choice to have such experiences as pain in the event of an accident. Any law or rule is a constraint on the “human experience” for a given person, the framing of reality in accordance to the social will that inhibits the person from deciding his/her own reality.

I know that all of this sounds crazy, but these are the sorts of things that he believes. And I don’t mean to go into all of this depth about it here, but I believe that it’s an important area of concern when discussing the gun control debate. Wilson, like many modern libertarians, is the symptom of a system of higher education that deals in abstractions, theorizing about theories about theories, so much so that people like Wilson become detached from the reality that others experience. Most people are too preoccupied with daily survival to worry about the effects that daily social contracts have on the freedom of the individual mind to experience “Nietzchean posthumous bliss”.  As a result, we have privileged people who don’t have to deal directly with the consequences of lax gun control and, so, do extremely irresponsible things to make pointlessly abstract points. What’s so often forgotten in cries for the individual right to bear arms is that the individual does not exist in a vacuum. Wilson, in making devices of death and destruction even more accessible, will only inflate statistics like the following taken from a Washington Post article discussing a recent study by the US Center for Disease Control: “A white person is five times as likely to commit suicide with a gun as to be shot with a gun; for each African American who uses a gun to commit suicide, five are killed by other people with guns.” Wilson, a white male, has an opinion on gun control that is actually part of a larger trend in which “African Americans tend to be stronger backers of tough gun controls than whites. A Washington Post-ABC News poll this month found that about three-quarters of blacks support stronger controls, compared with about half of whites.” What I mean to say is that it’s easy for privileged to make arguments about The Revolution and publish free printable gun designs on the internet because they will, innately, never have to deal directly with the consequences of such actions. 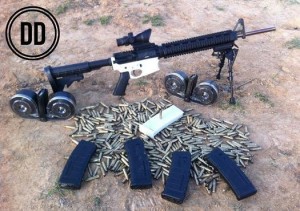 One of the positive outcomes of Defense Distributed’s wildly reckless behaviour, and possibly one of their intended consequences, is that it does deconstruct the gun control debate to the point that we may have to examine the underlying causes of gun violence – causes that cannot be addressed by simply limiting the number of guns in circulation. In the process of writing a piece on mass violence occurring at primary schools in China and the US, I realized that China had similar numbers of attacks on primary schools as the United States. The difference, due to stronger gun control laws in China, was that the Chinese attacks involved knives, while the attacks in the US involved guns. Though the US attacks yielded more fatalities, as would be expected with the use of firearms, this seemed to be proof that guns themselves were not the issue – that there might be something more systemic at the root of these acts of violence.

Steve Israel is concerned with lone wolves. The media, in response to the shootings in Connecticut and Colorado, are concerned with mentally ill loners. Cody Wilson is concerned with personal freedom. The human species, however, is a collective entity, based simply on the fact that we all have to live and work alongside one another.  So, perhaps it is our collective that should take some responsibility for these horrible acts of gun violence. What in society could be causing people to commit acts of violence on the scale of Newton and Aurora? Is 3D printing legislation going to prevent violence or might public access to better mental health facilities prevent violence instead? How did our collective not notice the burgeoning instability in Adam Lanza and attempt to do something about it? How does our society, on a regular basis, ignore the systemic inequality that leads to gun violence amongst the impoverished, for instance? In other words, is it possible that, by acknowledging the human species as a collective, we might begin to improve the standard of living of the entire community?

[1] Before ultimately being overthrown by the United States, it  might not have been possible for the people of Haiti to gain their independence from the French in 1804 without the use of force.