I’ve been wanting to cover Arcology Now! on 3DPI for some time, but couldn’t quite frame the project right for our readers. Arcology Now!, if you haven’t come across them before, is an Arizona-based group that has invented a quick and affordable way to construct buildings using 3D-modelling software, metal rods and people power. They’ve referred to their Universal Constructor as a human 3D printer in that CAD models are converted to physical objects through assembly by human beings, a concept that blurs the definition of 3D printing in a way that I, personally, wholly believe in, but might not fit the parameters of a 3D printing news website. In the group’s recently launched Kickstarter campaign, they’ve finally crossed the boundary into the use of actual 3D printing.

Arcology Now! wants to create cheap, sustainable housing for the masses and the way that they intend to accomplish this is quite ingenious. First, the group gets a lay of the land on which they plan to build by scanning the terrain with a 3D scanner. Then, they begin modelling a simple shape for a building onto the virtual landscape they’ve scanned, making holes for doors and windows. The house is converted, using a custom piece of software, into a series of rods.  Arcology Now! saws and hammers these rods in the physical world out of simple tubular steel, which they reason is the perfect building material in terms of strength, weight and cost. The assembly instructions for the house are printed onto stickers labelling each rod so that large groups of people can work in parallel to bolt them together, with a single sized bolt, into the final structure. The company’s CEO, Brian Korsedal, describes the process as a “techno barn raising”. Here’s some footage from their latest build at Mindshare LA’s 6th Annual Masquerade Ball:

The group has had many barn raising parties and have two tried-and-true metal frames, but the frames are about as far as they’ve come. They have yet to “shrink wrap” the structures or apply foam or stucco to make the homes safe from the elements. To push them further in this direction, they’ve decided to launch a Kickstarter campaign and hope to obtain enough funds to make a proof-of-concept entry into the MicroDwell 2014 Contest in Arizona. As a result, Arcology Now! has partnered with several companies to fully realise their design.

The landscape will be video recorded using a quadcopter from Birds Eye Productions, which will provide a higher resolution rendering than Arcology Now! was previously capable of, and the result will be processed into a 3D model by Captured Dimensions. To shrink wrap the house, Geo Event Systems is going to CNC cut and sew a (California fire standard compliant) fabric cover. Finally, and this is where the “real” 3D printing starts to come in, Sculpteo will be the group’s source for the home’s furnishings, such as knobs, lampshades, showerheads, etc.  The house will also feature open-source CNC’d wood furniture, a solar generator provided by CentroSolar, an aquaponics system, a solar shower and a composting toilet. 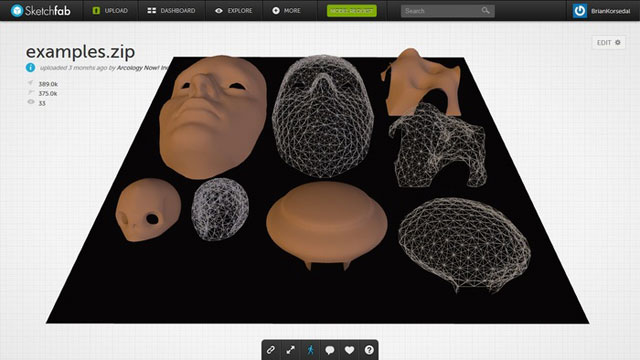 Arcology Now!’s ultimate design will be produced through a crowdsourcing competition. You can submit your entry for the contest here to be judged worldwide. If you win, they’ll convert your design into a steel frame design to build their house for MicroDwell 2014. In the case that you’re uninterested in submitting a design, you can still help fund their campaign to receive 3D printed copies of either one of their previously constructed structures, the teardrop for $130 and the torus knot for $150, or you can purchase a 3D print of any of the entries to their design contest for $200 or more. Large contributions of $2,000 or more can buy you kits to build the teardrop or torus frames. In the Phoenix area? You can also help the Arcology Now! team by participating in one of their group builds.

The whole thing is very ambitious, but also very doable, I think. If they can pull it off, they might even become successful enough to pursue their other grand visions, including: automated greenhouses to connect every home more directly to nature, self-replicating factories and printable cities. I think that Buckminster Fuller would be very proud.

Watch the video for their campaign below!