Earlier this week, I wrote about Bagpipes the penguin, who was given a new 3D printed foot after having his amputated. It seems it has been a good week for animals and 3Dp, with a kitten in Denver also getting used to new ways of walking! 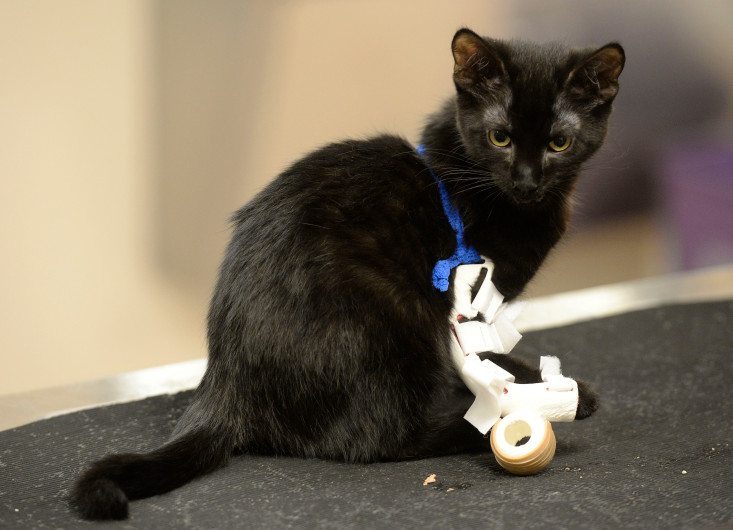 Sonic was born with a deformity in his front right leg, making it impossible for him to walk normally. This 4 month old homeless kitten was dragging his foot on the ground, which would have led to an open wound that would never heal. Things weren’t looking too good for poor Sonic, until the Denver Animal Shelter teamed up with students from the Art Institute of Colorado. Together, they developed a 3D printed prosthetic that will help Sonic walk again.

They developed nine different models over the course of nine weeks, with the kitten’s growing size presenting a challenge. It is expected that he will be fully grown in another two or three months, and he can then be fitted with a final prosthetic. 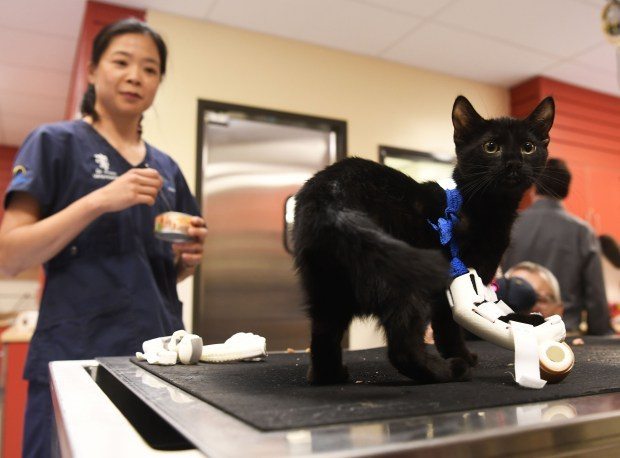 “Most important is having an understanding for how this prosthetic works for a cat,” Louisa Poon, vet at the Denver Animal Shelter said. “For other animals with these deformities, especially when it affects both front legs, they’re not adoptable and we usually have to euthanize. So hopefully we can learn from this and we can make them adoptable again.”

“As we’re starting to understand how his mechanics move, we’ll develop more and eventually have a lighter material,” said Gregg Harvey, a professor at the Art Institute of Colorado. “At the end of this, we’ll have a very exotic final product that will fit perfectly to him. This is about getting to apply design skills to somehow better the world.

Animals are innocent — if we can somehow help Sonic, we’re doing a good thing.”