Deep in the heart of the deserts of Santa Fe, New Mexico sits the Los Alamos National Laboratory, home to the Manhattan Project and the birthplace of the atom bomb. One of only two labs in the United States where classified work on nuclear weapons is pursued, LANL is also responsible for the destruction of the country’s nuclear weapons stockpiles. Aiding in the effort to safely dispose of these depleted plutonium pits is the same company that has made it its mission to develop in-process quality controls for 3D printing systems, Sigma Labs. 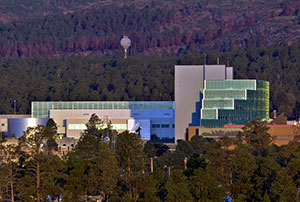 In 2000, the US and the Russian Federation agreed to dispose of 34 metric tons of weapons grade materials by converting them into nuclear fuel as part of the Plutonium Management and Disposition Agreement. A program titled the Advanced Recovery and Integrated Extraction System (ARIES) was developed for disassembling the nuclear weapons and transforming the remaining plutonium pits into plutonium oxide powder that can be used for civilian purposes.  According to a fact sheet put out by the White House in 2010, converting the material into fuel is one of the limited ways of disposing of it:

Weapon-grade plutonium, unlike weapon-grade uranium, cannot be blended with other materials to make it unusable in weapons. But it can be fabricated into mixed oxide uranium-plutonium (MOX) fuel and irradiated in civil nuclear power reactors to produce electricity. This irradiation results in spent fuel, a form that is not usable for weapons or other military purposes and a form that the Protocol prohibits being changed any time in the future unless subject to agreed international monitoring measures and only for civil purposes.

Sigma Labs, as an expert in the field of in-quality process control was awarded a contract from the research facility to effectively support the ARIES project, with Mark Cola, CEO of Sigma Labs, saying,

This latest contract is one in a series of awards that validates our expertise and our ability to deliver solid technical results to the most demanding applications in the world, namely U.S. National Security and reducing the threat of weapons proliferation. This latest contract is part of a broader engagement strategy that Sigma Labs is implementing with the U.S. National Laboratories covering advanced manufacturing technology areas ranging from additive manufacturing and 3D printing to critical U.S. National Security objectives such as ARIES.

One 3DPI reader, thought that this contract and others, along with the company’s application for a patent of its proprietary in-process quality control system for additive manufacturing, 3DPrintRite, will prove that Sigma Labs will play an important role in the widespread adoption of 3D printing. As stated in my review of the Additive/Aerospace Summit, quality control is still in development for the use of 3D printing for large manufacturing purposes, stating that, “the attempt to incorporate 3D printing into aerospace is being performed by a schizophrenic hivemind. Individuals and companies are acting in self-interest, without regards to the whole ecosystem.” This particular 3DPI reader replied in an email that, “Sigma Labs continues to pursue advancing PrintRite3D and their work is very exciting. Not only are they working to benefit themselves and GE but also towards global standardization with NIST and NAMII. The hivemind will soon receive a remedy and Sigma Labs will be one of the contributors of their schizophrenic therapy!”  As a strong believer in the third industrial revolution, he sees efforts by the European SASAM as another indicator that 3D printing will be adopted by every manufacturing industry.

Whether he’s right or not, it’s nice to see how profitable disarmament can be. The contract with Los Alamos is thought to generate Sigma Labs up to $178,800 in revenue.  And that’s in a war-time economy.  Imagine how much more they’d make if we were working on livingry instead of weaponry!