If you or your company is involved in high-end manufacturing, you probably have heard of, or maybe even used, Sentrol’s CNC machines. Having been in the business for well over thirty years, the company has focused on producing innovative and highly functional computer controlled fabrication machines… and now they are moving into the additive manufacturing field.

At a conference of about 100 people, Sentrol introduced their new SS600, a large SLS/SLM machine, which is capable of fusing plastic, metal, or sand into 3D objects. At the conference, the new machine sat in the back of the room humming away, a live-feed camera projecting its progress onto a hefty monitor for all the guests to see.

The conference began when the Chairman of the company, Mr. Choi JinYong, gave the welcoming remarks and explained the hows and whys of the company moving into the AM field. He then introduced Mr. William Joo, who was key to the new products development. Readers of this site may remember Mr. Joo was the inventor of the “WillyBot” desktop 3D printer in Korea several years ago. At that time, there weren’t really any 3D printers available in Korea, so he set about building his own. He then gave 3DPI a taste of the research behind the SLS 3D printer he’d been working on. Anyway, to make a long story short, he’s been pretty busy. Mr. Joo Spoke about the development process of the project and the challenges that his team overcame. 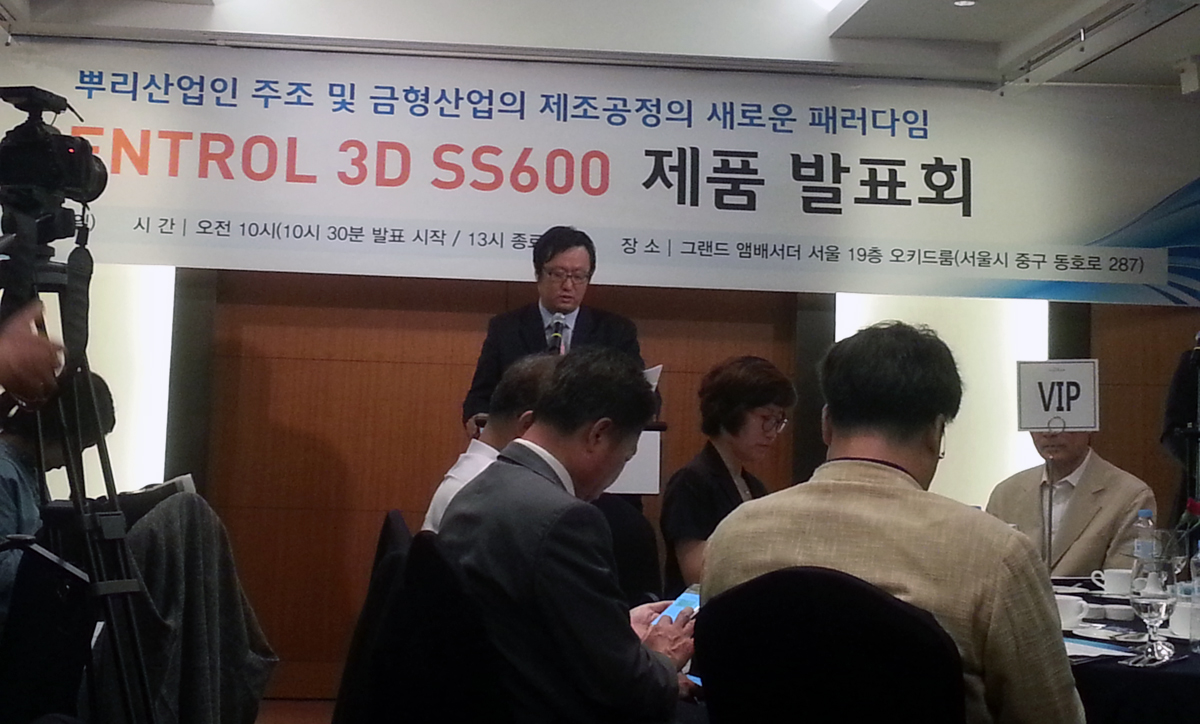 The Director of Sentrol, Mr. Sang SooRyu, then presented a short video on the new project, its development, and the company’s plans for the near future. He then announced that the new machine will be shown at the Euromold 2015 show later this month, at the Simtos 2016 show next April here in Korea, and at the CES 2016 show in Las Vegas.

The fourth speaker, Mr. Katsumi Sakamoto, Managing Director for Sentrol, took to the podium and spoke a little about the future of the industry and noted that talented younger people are going to be critical for the continued success of the manufacturing industry as the processes and technologies changes from their traditional methods. As an example he gave a detailed explanation of just how 3D printing increases the turn-around time (and thus saves money) in the metal casting process over more customary techniques. 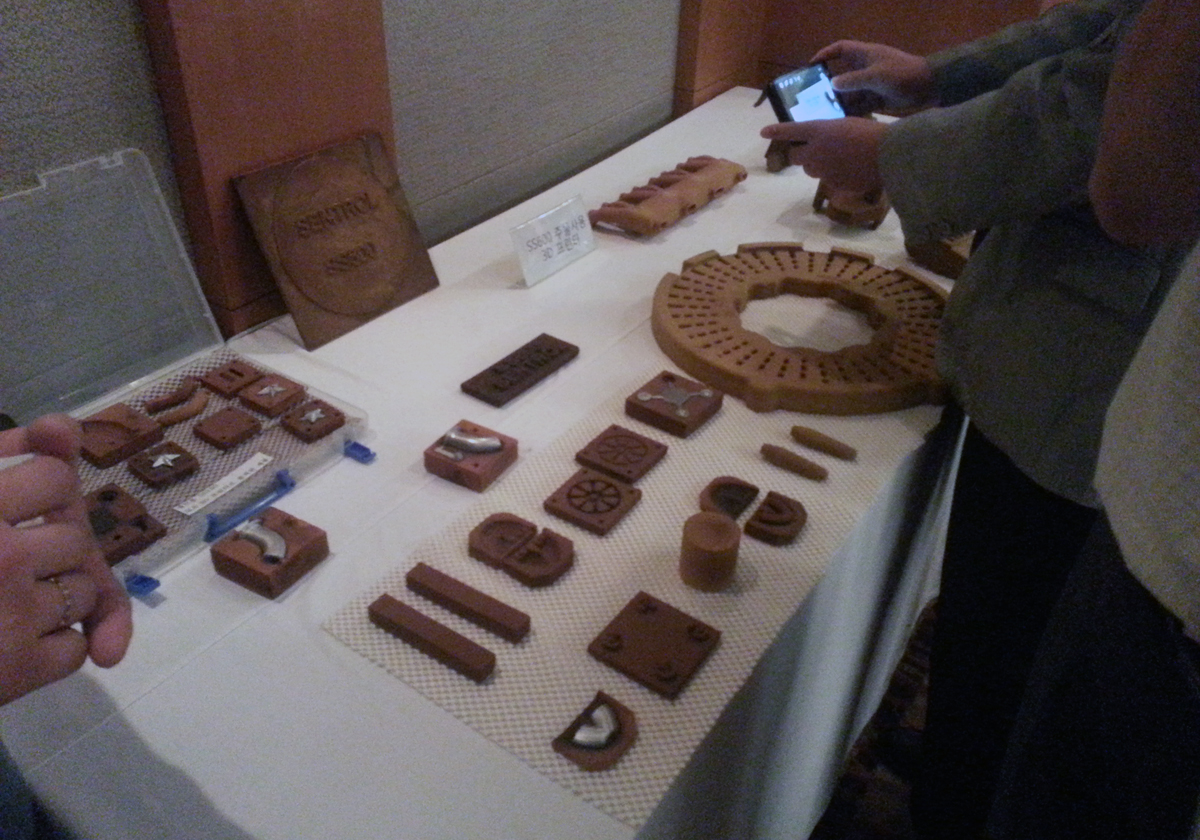 A lunch was served and the guests were then allowed to get an up close view of the new machine, some examples of its output, and ask the onsite engineers any questions they wished. The samples of output on display were all of fused sand (for metal casting) but the engineers explained that the machine could also use plastic powder or metal powders. The engineers assured us that their machine could use ordinary sand, rather than any sort of specialized “engineering” sand. Now I am not all that familiar with sand casting or using sand as a build material, but that detail sounded important. 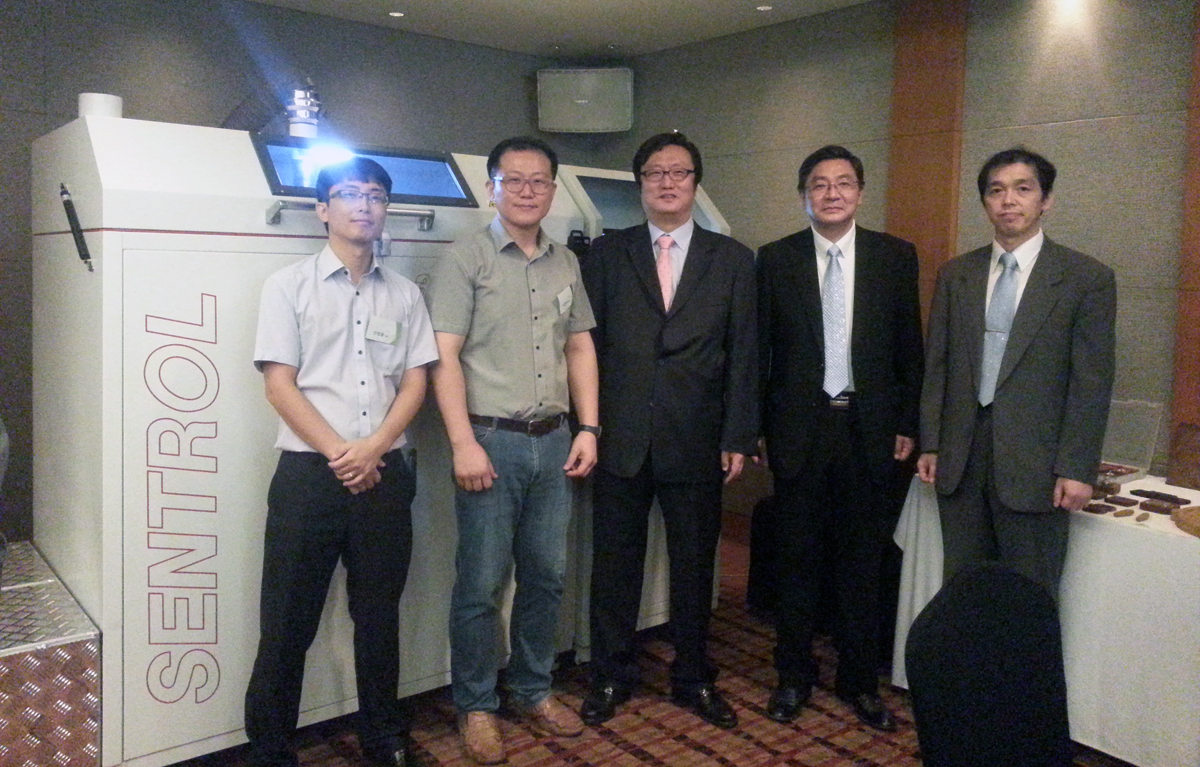 I was also told that the machine would probably retail in the neighborhood of $300,000 USD…which is a lot, until you realized that machines offered by other companies with comparable abilities retail for far more than that. I had once heard a technology expert warn against getting too comfortable with the status quo in the tech sector saying, “Keep in mind that the big guys in the market today may not even be around ten years from now.”   That may turn out to be true or not in 3D printing, but however the future of the industry plays out, it’s going to get a lot more interesting.