ro[BO]tech – A Team Outlining the Architectural Future of Maribor

ro[BO]tech is a collaborative architecture/concept design team consisting of four Italian University of Bologna students (Giulia Bottura, Ilaria Fiorini, Pier Luigi Forte, Lorenzo Natali), which has resulted in something that could only be described with the inflation-heavy word that is cool. The purpose of building this design-oriented team was to work on – lightly brace yourself – Maribor2112Ai [Architectural Intelligence] – 100YC [100 Year City] program with the project R+D Reaction & Diffusion. Simply put, the respective design team got together to work on a project realized with 3D printing to be showcased at an architectural exhibition in Venice. 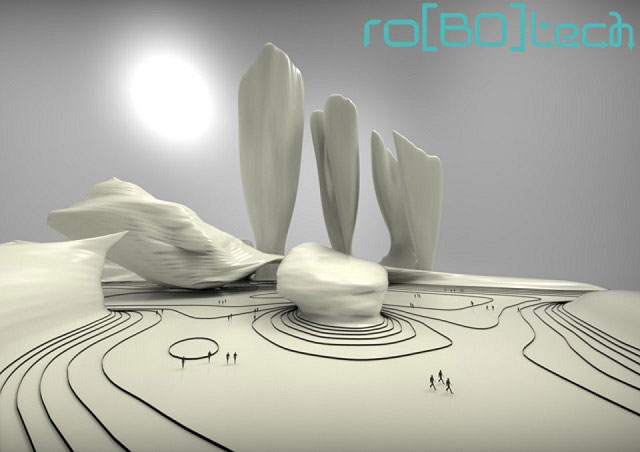 The basis of the team’s R&D Reaction & Diffusion concept is in literature and research, which considers the mentality of people in the age of the twenty-second century to generally rally around the global networking aspect, in which we all are considered as interconnected functional actors. To consider these changed – and ever changing – (mainly western) needs, architecture as a discipline must also find new ways to provide solutions that support this perceived new paradigm. To take this view of the new world even further, artificial intelligence also comes in to play in this future-oriented mentality. The roBOtech team expects that in 100 years “technology and organization are no longer separable from a performance standpoint, just think of supercomputers and projects associated with them”. Analogously, the team uses the human neural network as an example of the future’s complex intertwined ubiquitous connection system. All of this and more difficult-to-grasp concepts have resulted in a vision of the city of Maribor (in Slovenia) in 2112, which has been created with a solid background in math called the Fitzhugh-Nagumo model and brought to life via 3D printers.

To appreciate the design process, a higher understanding of mathematical and geometrical models is not needed, so take a look at the gallery below to get a better visual understanding of the Reaction and Diffusion project.

As an aside, also interesting to ponder where 3D printing will be at in 2112?

All images courtesy of ro[BO]tech