Own a Piece of Japanese History with Rinkak's 3D Printed Maps

The Sengoku period was an era in Japan that was marked by constant battles between the once warring states of the country. Starting with the Onin war in 1467, the various Senguko era battles are mapped out all over Japan, and, now, thanks to 3D design marketplace Rinkak, maps of these historic battlefields can be replicated with 3D printing.

Rinkak’s marketplace is geared towards supporting those who utilize newer digital fabrication processes, such as 3D printing, allowing these Makers to upload their projects into their consumer marketplace, where Rinkak then takes care of supply, demand, shipping and stock for the creator’s product. Through their new feature, the 3D designed DecoBocoMap, Rinkak is offering eight different Japanese battle maps to choose from, which can be ordered as is or customized in whatever way one might like. The maps are geared to please battle history fans, students, and tourism professionals, giving map-enthusiasts a 360-degree view of these historic war sites. 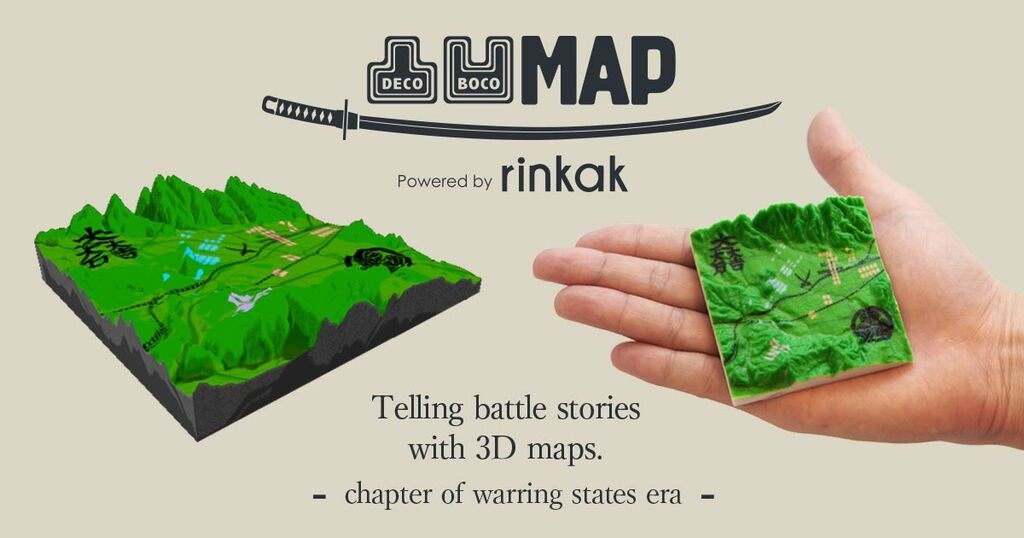 The DecoBocoMap process is both simple and customizable, allowing customers to choose one of the eight map samples currently available in their marketplace. From there, the selected map is transformed into a 3D display at the push of a button, providing automatic elevation and details to the mapped out battleground. While you can choose to stop the process here, if you wish, consumers can personalize the elevation of the 3D map with easy-to-use editing functions on the DecoBocoMap, giving you the option of designing a realistic map or an artistically altered one, too. The image data of the map can also be downloaded and edited on the design software of your choice, before being ordered, as well, which, for the more design-savvy, will allow them to create whatever type of map they desire. Lastly, you just hit the ‘purchase on Rinkak’ button and, voila, the map will be printed and delivered to your doorstep.

The second and latest version of the DecoBocoMap platform was released in June 2015. There were a ton of upgrades within the 2.0 Basic model, allowing for double the pixel resolution (512 x 512) and five additional zoom phases (12 compared to the first version’s 7), allowing Japan to be represented with much finer and more realistic detail. The battle map images are 3D printed in full-color sandstone, and can be purchased in three different sizes, 5 x 5 (~$17), 7 x 7(~$33), or 10 x 10 (~$50) square centimeters. Whether you want a true replica of a historic Japanese battleground, or you just want to take the DecoBocoMap and design a customized version of your own map, Rinkak is offering to take you through the entire process of selecting, modeling, customizing, and printing out our own little 3D piece of history.