Hack on Wheels has taken on the challenge of providing an online library of wheelchair hacks that could benefit the whole world.

Rachael Wallach got the idea for an open source wheelchair while backpacking through South East Asia and India. She saw how first world wheelchairs simply don’t work for the rough terrain in the third world and how individuals with different disabilities struggled to compensate for the shortcomings of their chairs.

In stark contrast, her £3000 custom chair afforded her relative comfort and total mobility.

Digital fabrication is ready for the challenge

She sits on the board of three UK charities after a career in the public sector and has now set up #HackonWheels at the legacy site left by the Olympic Games in East London. She believes that digital technology and fabrication has reached a point that she can implement her grand idea to give a better quality of life to every wheelchair user.

Right now the World Health Organisation states that 65 million people around the world need a wheelchair to live an independent life, but having a chair is just the start.

Each person has their own unique set of requirements that depend on their weight, height, their disability and their particular lifestyle. 80% of people don’t have the chair they need and in many poorer countries they simply don’t have a choice of wheelchair. They are lucky if they get one at all.

Even the luckier ones can’t get the perfect chair that fits them like a glove. Instead they have to make do with the majority decision, a chair that works quite well for everybody rather than perfectly for everybody. It is simply too expensive to create a tailored chair with traditional methods.

Technology has the capacity to change this.

Hack on Wheels took its inspiration from the likes of e-NABLE, which created open source prosthetic hands for less than $50. It wants to unite the maker community for the greater good and find a way to create cheap, functional wheelchairs that improve the quality of life of people that need them.

The idea is relatively simple. It wants to create an online library of open source designs that have worked for others. So people can simply delve into the archives, find exactly what they need and then fabricate it locally with a 3D printer or even something more basic.

There will be trouble ahead

Funding the project and turning #HackonWheels into a financially viable platform that can support the disabled community in the years ahead.

A Hackathon at Happylab Vienna brought 30 participants together and the end result was a base carbon frame made from tubes that could be cut. They are then braced with 3D printed joints, so the chair could easily be customised and the rough cost is just $300. 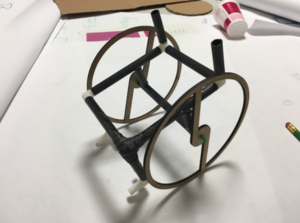 It also produced a concept for a child’s wheelchair with parametric joints that could effectively grow with the child. The Hackathon also produced a castor fork, which holds the wheels together, which could work without welding. This reduces the cost and allows ongoing modifications to the chair.

They also made a backrest from high-density foam based on a 3D body scan, which fits the individual perfectly and makes for a much more comfortable life.

What the future holds

This was just one event and shows that Wallach is on to something. If she can harness the power of the maker community and indeed empower disabled people around the world to have input and redesign their own chairs, then there are no limits to what #HackonWheels can achieve.

We think it’s an incredible project, Wallach is clearly driven to succeed and we’re going to check back on this one.