OpenDive: Strapping a Phone to Your Face Never Felt So Free

So, you’ve already decided to strap your phone to your face in order to escape a world so strange that it would cause you to strap a phone to your face, but you don’t want to shell out the dough for the vrAse on Kickstarter.  Well, there’s good news! The makers of OpenDive have made it even cheaper to make your reality virtual.

Last week, we wrote about the vrAse, a 3D-printed headset that uses your smartphone to create an immersive virtual reality device.  It was meant to be cheaper than the Oculus Rift because, in order to watch 3D movies or play 3D games, you could just slide your smartphone into the vrAse smartphone case and get to gettin’.  Soon after covering vrAse, we were informed by our friend Nils that this product already existed in an even less expensive form elsewhere.

The OpenDive, created by Durovis in Germany, is more or less the same thing as vrAse, except that it’s more or less free. The source files for the headset are on the developer’s website (or on Thingiverse), so all you have to do is to buy a piece of elastic and some lenses from Durovis (for about €6.99 or $10) and you’re good to go. After assembling the OpenDive headset, you can slide your smartphone in and start playing games, that use the same side-by-side (SBS) display as vrAse, to become fully immersed in your gaming experience. The company is also in the process of releasing Dive, a fully-assembled and polished version of the headset for the non-Makers out there. 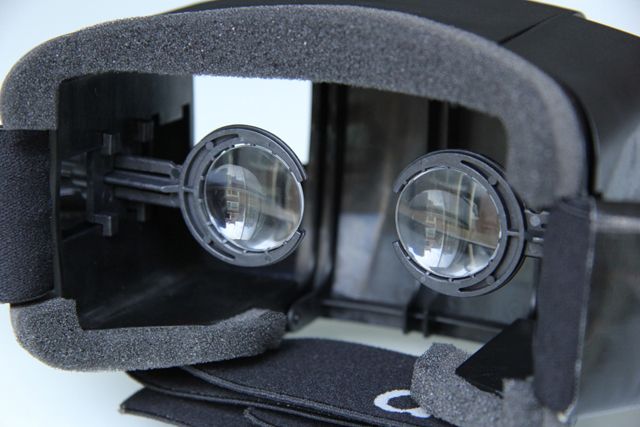 The headset is only compatible for Android phones at the moment, but the Durovis team is working on adapting it to the iPhone as well.  Though they don’t explicitly state OpenDive’s ability to harness augmented reality and play 3D movies, I’m sure that this won’t be difficult to accomplish.  At the moment, Durovis has only released a few demos that work with the headset, including Quake II, but with Unity, a game development software that has a pretty extensive free version, you can start making your own games at home! In fact, the Durovis forum already has a number of users who have developed games for the headset.  I wonder how my history of the Universe “game”, enn-weee!, would feel on OpenDive…