For the members of OpenBeam, not all 3D printers are created equal and this is particularly true of RepRaps. According to the team, using 3D printers to make 3D printers is both inefficient, as the process to print new printer parts is a slow one, and unreliable, because printed parts will not be precisely the same. This is why they have designed the Kossel Pro, a delta style printer built from non-printable parts, stamped or injection moulded metal extrusions, to ensure reliability, reproducibility and efficient production time. 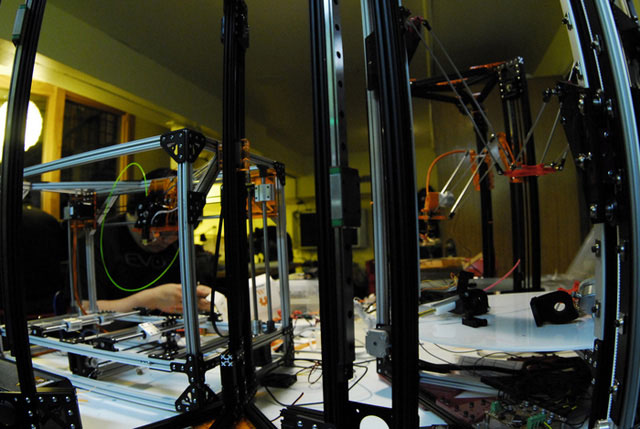 The 3D printer, now in Kickstarter funding mode, was born from the original OpenBeam project, a Kickstarted endeavour to create a standardized set of J and T slot metal extrusions with 3 mm holes ideal for Makers and hobbyists to assemble into various structures for whatever they were working on (such as 3D printers). Continuing where the Rostock 3D printer and its descendent, the Kossel, left off, members of Metrix Create:Space, the Seattle-based hackerspace home of OpenBeam, began work on a new delta style 3D printer. The result is the Kossel Pro, meant to be easy to build with only a 3 mm Alan wrench.

The Kossel Pro, besides the potential for high speed and accuracy offered by its delta design, has the primary advantage of the OpenBeam system, an easily expandable and modifiable design:

“We will be designing our parts for maximum interchangeability between the Kossel and the Kossel Pro.  We expect that parts such as the extruder body, the end effector, the ball joints, and the carriages to be reusable between the two machines.  We will also be intentionally over designing our parts – for example, we are using a commercial linear ball recirculating rail, and we will be designing a fully ball bearing arm joints.  Such features may not be necessary for a machine the scale of the Kossel / Kossel Pro, but by over designing, it allows for future expansion – larger printers, more aggressive printing speeds, multiple extruders, etc. “ 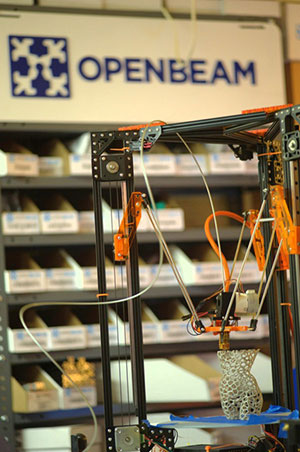 The minds behind the Kossel Pro assure potential backers that their machines work, as they’ve built multiple copies. And Terence Tam, the inventor of OpenBeam, says that he will rely on his previous Kickstarter experience to ensure that they won’t run into any typical Kickstarter snags, such as the delayed shipment of rewards. Speaking of rewards, backers who pledge at amounts of $1,000 and over will be able to purchase Kossel kits and fully assembled printers. But, more than the rewards for individuals, OpenBeam promises rewards for the Open Source Hardware and hacker/Maker community as a whole:

“We donate a percentage of our proceeds towards open source hardware causes; we are a member of the Open Source Hardware Association, we sponsor the development of Slic3r and other slicer programs with monetary and hardware donation, and we are sponsoring our local mini Maker Faire in Seattle. For this project, we will be working closely with the folks at Metrix to grow the Metrix Open Hardware Lab.  We are going to do something really cool that will change the way people fundamentally think about prototyping electronics.  We can’t tell you all the details yet, except that it will be something really, REALLY awesome.”

The Kossel Pro has already seen some success, earning the Editor’s Choice Award at this year’s Bay Area MakerFaire. And, with over $40,000 met of their $60,000 goal with a month left on their campaign, the project might have a good chance of being funded, once again proving that Kickstarter and 3D printers make great bedfellows.