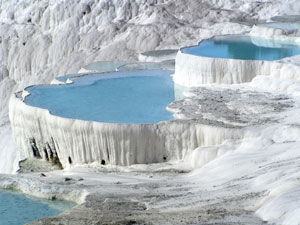 Sintering is based on a natural process as seen at places like Pamukkale’s hot springs, but is being adapted to aid in 3D printing and manufacturing by Andreas Bastian. He’s working with the support and guidance of professor Jordan Miller and the Advanced Manufacturing Research Institute located at Rice University. AMRI would probably be considered a hackspace if it wasn’t being funded by a university and several 3D printing companies like RepRap.org, Ultimaker and SeeMeCNC. In true maker fashion, Bastian is converting an industrial laser cutter into a 3D printer that uses high powered lasers to sinter nylon particles together into solid objects. He even used the laser cutter to cut the pieces for the housing that would eventually contain the repurposed laser and build platform. The result is an unconventional, yet functional 3D printer. 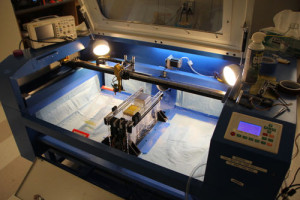 The OpenSLS 3D printer uses the powerful industrial lasers from the disassembled laser cutter to heat up the printing medium just enough to partially melt the small nylon particles. However they will not heat them up enough to completely liquify them, just enough to liquify the outer layers, causing the them to bond together once the partially melted particles re-solidify. This allows the lasers to fuse specific shapes in the printing medium one layer at a time, allowing for a rather impressive level of detail for a simple prototype. Here are a few videos showing the sintering process: 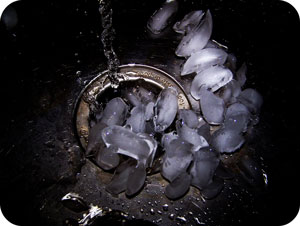 You know how sometimes ice will clump together when you first put it in a glass of water? The water is warmer than the ice, so the outer layers of the cube start to liquify. But the cube itself is still frozen and once the temperature of the water cools down it will cause some of the outer layers of the ice cube to freeze again. Since the ice cubes are touching each other they tend to re-freeze together into large clumps. That is essentially what is happening to the small nylon particles that are being 3D sintered.

Bastian is chronicling the development of his laser sintering machine on his blog, where he details the entire process, starting from when he first got the SeeMeCNC laser cutter and started the arduous process of converting it into a very different and much more complicated machine. While he’s currently had his most success printing with a nylon powder, he had his first using a wax powder mixed with carbon particles. Again, you can see how impressively detailed his prints are even at this very early stage in development.

The laser sintering 3D printing process does have its drawbacks of course, many materials in powder form are extremely flammable and could cause respiratory damage. And the industrial lasers being used are extremely powerful and capable of causing very real harm if they are used improperly. This is a 3D printer truly at the prototype stage and probably isn’t a project suited to most makers. However, all of Bastian’s work is completely open source, so if you think you’re up to exploring laser sintering technology there is plenty of information to be had.

Aside from Bastian’s wonderfully informative blog, you can learn just about everything that there is to learn about the process on the RepRap wiki page.