The world of metal 3D printing has just become a lot more interesting, as an unexpected player enters the game. Boston-based NVBOTS  has announced the establishment of NVLABS, an R&D division dedicated to the development and implementation of cutting edge 3D printing technology, led by Dr. Paul Burke as the firm’s newly appointed Chief Research Officer.  The first technology to come out of NVLABS bodes well for the rest of their research endeavors, as NVBOTS has also announced the creation of  a brand new, high-speed, multi-metal 3D printing technology capable of fabricating with stainless steel, titanium, nickel, copper nickel, aluminum, zirconium, silver and palladium in the same build and at 10x the speed of current metal 3D printers. 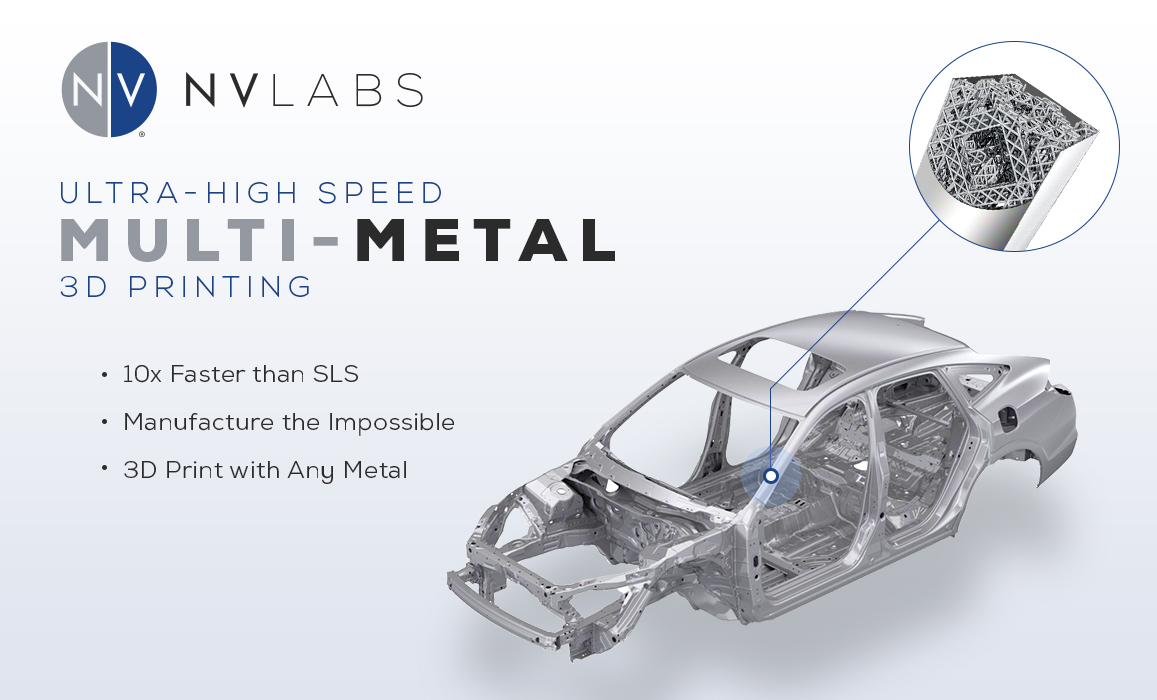 Those familiar with NVBOTS will recognize the company as an innovator of semi-autonomous, cloud-based FDM 3D printing.  Their NVPro 3D printer, monitored and controlled online, is capable of automatically removing prints once a job is completed, allowing new print tasks to begin.  As a result, it’s served as a platform for enterprises and schools, where larger numbers of users can use the machines to perform a large number of print jobs. The company’s latest announcement, however, puts NVBOTS in a whole new light.  To learn more about NVLABS and their new metal 3D printing technology, I spoke to NVBOTS CEO AJ Perez, who was able to tell me about the implications of multi-metal 3D printing for the 3D printing industry and for manufacturing as a whole.

Speaking with Perez, I learned that, after working on this new metal printing technology since November of 2014, the company is now in the process of establishing alpha testing partners. Though he wasn’t able to go into too much detail about how the technology works, he was, however, able to tell me what their technology wasn’t. “It’s a new process that nobody has seen yet,” Perez explains. “I can tell you that it’s not a powder-based system. It’s not a cheaper or faster SLS or DMLS. It’s a new approach to metal 3D printing. And that’s how we’re able to achieve multiple metals. If we were doing it with a powder-based system, we wouldn’t be able to do that.”

And, because it’s not a powderbed system, it doesn’t have the same disadvantages, such as the high cost or the inability to fuse multiple metals together.  This is one of the biggest capabilities of their new technology: blending diverse metals together, previously near impossible to achieve with other technologies.  “In other forms of metal 3D printing, parts come out green or porous and things like that,” he says. “We don’t have those same kinds of issues that the powder based systems have… And, from an R&D perspective or for internal purposes, printing with powders is already fast enough. What really intrigued aerospace manufacturers about our technology is A.) the ability to print with metals that people can’t use and buy in the form that you need for SLS. Like zirconium, very difficult to do. I’ve only heard of one person who’s even attempted to do zirconium with an SLS machine. And B.) material flexibility that, in an SLS process, you can only do one metal for that entire build. That is where this is truly different: the ability 3D print with multiple metals in the same build.”

The benefits of combining metals opens up completely new methods of design unprecedented in the world of manufacturing. Designing for multi-metal production requires a different mindset that even goes beyond the new approaches required by 3D printing in general.  Perez uses the design of an airplane or missile as an example. “If you want to decrease the payload, you might use 3D printing to create a part with a complex inner structure to make it more lightweight, while still being structurally sound,” he explains. “But, the intelligent engineer will realize that, as it’s flying through the air with 30% less metal there, the heat will make it fail sooner because, now, it has less thermal mass to absorb that heat.”

The use of multiple metals, however, adds an extra layer of complexity to the possible designs. Perez continues, “But if you start thinking about it, not just in terms of mechanical properties, and but other properties, like thermal properties, you might combine titanium for the outer foil with an intricate, copper heat-sink nestled inside that inner structure. So, you get the heat out of the titanium, so that it doesn’t fail, but get to take advantage of the reduced weight made possible with less titanium there.” In other words, engineers can take advantage of the material properties of one metal and those of another metal and combine them in a single build, something that NASA’s Jet Propulsion Laboratory has also been exploring.

Because this process will open up new design possibilities, NVBOTS describes their new R&D lab as, not just a division for creating new technologies, but as a resource for companies seeking to implement those technologies. Perez says, “What people are getting from us is not just the machine, but the expertise. We’re working with their engineers and our engineers are having conversations about how to improve a design and how to think about design from a fundamentally different with a different set of rules.” With a focus on enterprises and Fortune 500 companies, NVLABS will be able to lend its expertise to these partner firms to best exploit the potential of high-speed, multi-metal 3D printing.  And this expertise is quite substantial, given the appointment of Dr. Paul Burke as Chief Research Officer, managing all NVLABS-sponsored projects.

Of his new position as Chief Research Officer and the launch of NVLABS, Dr. Burke says, “3D printing is undergoing a transformative state and NVBOTS has been leading the way since the development of the world’s first fully automated 3D printer, able to run 24×7 without human interaction – essentially providing a 6 square foot automated factory in a box. With NVLABS, the company is set to take things to an entirely new level, granting companies access to state-of-the-art automation and ultra high-speed, multi-metal printing capabilities that will allow them to cost-effectively manufacture and scale, in ways only imaged – until now. I am proud to be part of such a well-respected and progressive company, and I look forward to making a difference in the world through our efforts.”

It’s important to note that NVBOTS’ flagship plastic printer, the NVPro, was designed with a focus on automation.  The same goes for their new metal 3D printing technology. The goal is to make the technology more autonomous than existing metal printing technologies. “Our plastic printer, the NVPro, has a really, really nice gantry,” the CEO explains. “We built what we consider a hardware platform where we’re able to change the core machine a little bit so that we can print metal. So, from that perspective, we’re leveraging the platforms to expand the material set. From a conceptual perspective, imagine taking the plastic head off of our printer and putting a metal head onto it. It’s a little more complex than that, but from the user’s perspective, that’s the difference.”

On top of that, NVLABS will be researching machine learning, which will go a long way to improve this automation. Perez tells me, “We’re really interested in ways that we can hook the printer to the cloud in machine learning for 3D printing. That’s something that no one else has begun looking at. No one else has been trying to gather the data that would make that possible.” With machine learning, one can imagine cloud-based software that collects data related to the printing process and creating new optimization procedures to ensure the quality and repeatability of future prints. So, as the same time that the software might be monitoring a print, it’s capturing information with which to improve future prints.

As NVBOTS secures alpha testers for their high-speed, multi-metal 3D printing technology, they plan to roll out the systems from Q4 2016 to Q1 2017. Following that, they do the same for beta testers, with those customers receiving units within the same time frame twelve months later. And, if you’re wondering about the cost of this system, Perez wasn’t able to give a specific figure, but he did say that “it will be significantly cheaper than any machine on the market that does metal SLS or DMLS.”

But, in the end, for a customer purchasing such a machine, he thought that the price was not so important in the long term. “In the near term,” Perez says, “we’re disrupting the casting business where you’re printing things out of titanium and typical metals that are cast, where you’re fighting for price, time to market, and things like that. The long term is that casting and SLS can only be a single metal. So, from that perspective, we’re not competing against casting or anything; we’ve developed a platform that enables engineers to make things that were impossible to make anything else on the market. So, from that perspective, there really is no competition. It’s significantly cheaper than owning a foundry or SLS machine, but the longterm benefits of multi-metal outweight any near-term costs that you would incur,” the NVBOTS CEO concludes.

As exciting as this new technology may be, this doesn’t mean that NVBOTS will be moving on from the educational sector that benefits from the NVPro and the firm’s 3D printing curriculum. The firm is still developing their products dedicated to education.  Metal 3D printing and the R&D from NVLABS just represents an expansion of the business.  Regardless of whether it’s semi-autonomous plastic 3D printing for a school or it’s multi-metal 3D printing for an industry, it’s clear that NVBOTS isn’t just intending to disrupt a specific field.  They’re looking to disrupt everything they can.