3D bioprinting has made new headway recently with the publication of a paper titled “Untethered micro-robotic coding of three-dimensional material composition” in Nature Communications in January. Researchers at Brigham and Women’s Hospital and Carnegie Mellon University have teamed up to develop a method for 3D printing biological material using magnetically controlled robots.

The team was made up of BWH’s Dr. Savas Tasoglu, a research fellow in the Division of Renal Medicine, and Dr. Utkan Demirci, associate professor of Medicine in the Division of Biomedical Engineering, along with Drs. Eric Diller and Metin Sitti, professor in the Department of Mechanical Engineering, Carnegie Mellon University. Using what the researchers call “untethered micro-robotic coding”, they were able to remotely control small robots, using magnetic fields, to move hydrogels containing biological material to form specific structures.  The magnetic operation of these micro-robots was used so that the construction of objects can be performed without disrupting the vitality and proliferation of biological cells.

To demonstrate the many capabilities of their technique, the researchers performed a number of experiments, such as the arrangement of triangle and rod patterns: 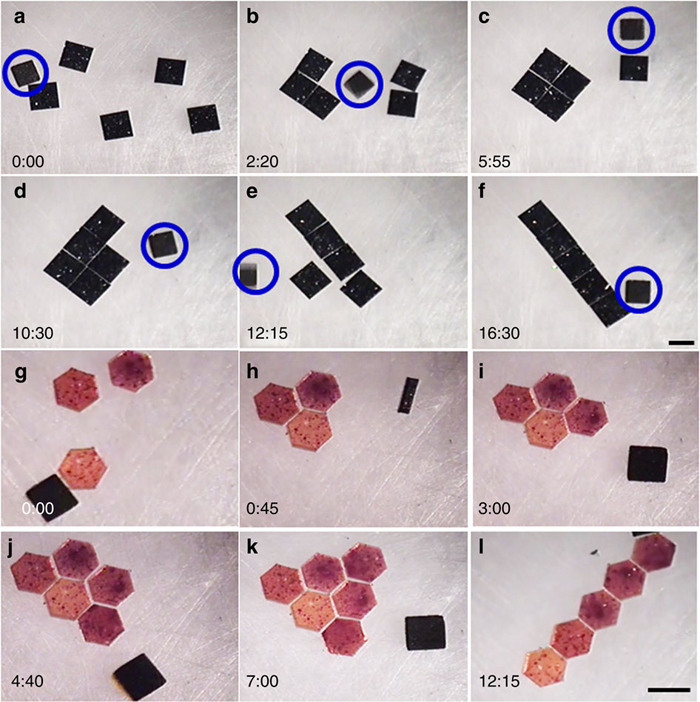 “Micro-robotic coding of (a–f) square silicon chiplets into square and rod patterns, and (g–l) hexagonal polydimethylsiloxane blocks into triangle and rod patterns. All the experiments were performed in a 20 mm × 20 mm × 4 mm chamber. Snapshots of manipulation of 1 mm × 1 mm square silicon chiplets at different time points (shown at the left corner). The time stamp format is minutes:seconds. The magnetic micro-robots are shown in a blue circle (a–f). Black object in each image (g–l) is top-view of the crawling magnetic micro-robot. Scale bar, 1 mm.

And the construction of a pyramid structure made up of differently shaped hydrogel structures and microcomponents, like 100 μm diameter copper cylinders and 200 μm diameter polystyrene spheres: 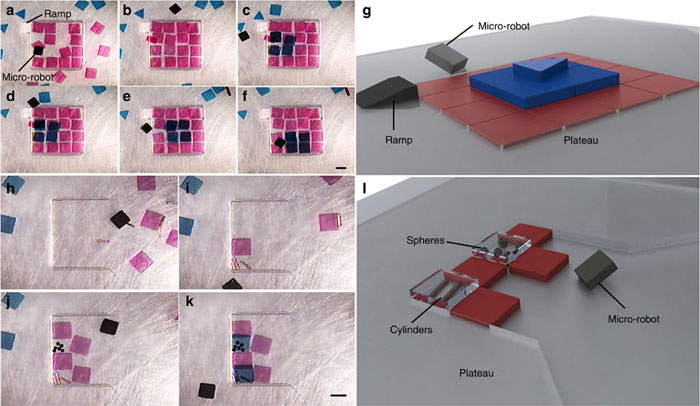 And the assembly of shapes using mouse stem cells: 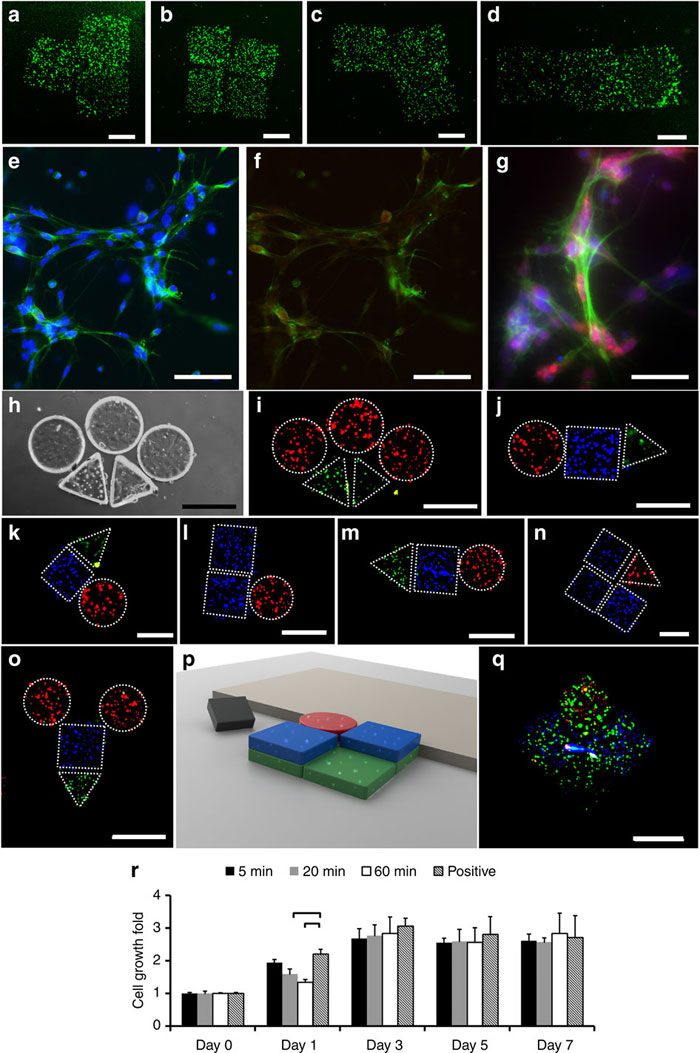 They also played Tetris just to show how precise they could be: 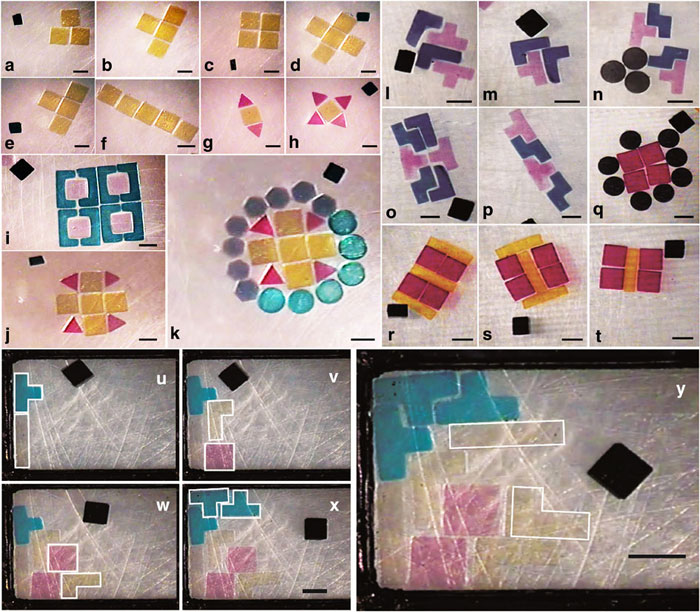 Micro-robotic coding and reconfiguration of Poly(ethylene glycol) dimethacrylate hydrogels (a–k) and gelatin methacrylate hydrogels (l–t) with various shapes into complex planar constructs. The black object in each image is top-view of a crawling micro-robot. To demonstrate the precision of micro-robotic manipulation, gels with several shapes including square, triangle, circle, hexagon, bracket-shape, plus-shape and others were coded. All the experiments were performed in 20 mm × 20 mm × 4 mm chamber in phosphate-buffered saline (PBS). Continuous coding and reconfiguring sequences are shown in panes (a–f), (g,h), (j,k), (l–p) and (r–t). Orientation and position control in untethered micro-robotic coding of material composition (u–y). Snapshots of ‘tetris’-shaped PEG hydrogels in a rectangular reservoir at different time points: 2:08 (u), 8:32 (v), 16:12 (w), 31:39 (x), 48:00 (y) in minutes:seconds format. Orientation and position of incoming hydrogels were dynamically changed as the geometry of cavities dynamically changed. All the experiments were performed in a 20 mm × 20 mm × 4 mm chamber. Scale bar, 1 mm.

Dr. Tasoglu explains that, “Compared with earlier techniques, this technology enables true control over bottom-up tissue engineering.”  Their untethered microbot approach is still just the beginning of the group’s research, but CMU’s Metin Sitti hopes that their technique will change the field of 3D bioprinting, saying, “Our work will revolutionize three-dimensional precise assembly of complex and heterogeneous tissue engineering building blocks and serve to improve complexity and understanding of tissue engineering systems.”