The Andy Warhol Museum, curator and creative director of Moss Bureau, Murry Moss and the Belgian-based 3D printing firm Materialise have teamed up to present “Factory 2.0,” a set of art installations that illustrate the relationship between art and 3D printing. Timed in conjunction with RAPID 2013, “North America’s definitive Additive Manufacturing Exposition and Conference,” which will be held in Pittsburg from June 10th through 13th, “Factory 2.0” will kick-off with an opening reception at the museum from 5:30-10:00 PM on June 10th.

“Factory 2.0” will feature work by the five finalists of i.materialise‘s and Murry Moss’ “Andy Warhol Challenge,” which invited artists and designers “to design what you think Andy Warhol would have produced with 3D printing technology if he were alive today.” As an artist, Warhol pushed his materials, methods and concepts into new territories; he melded the aesthetics of “high art,” consumer goods, fame and spectacle in his paintings, pushed boundaries of duration and tedium in his film work and blurred the lines between the lived and performed life. Relative to his complete oeuvre, and while likely having the means of a good number of acceptable methods at his disposal, he produced few sculptural works, only his famous Brillo, Campbell’s Soup, Heinz and Cornflakes boxes (which were a bit like cubed screen prints). This fact makes the “Andy Warhol Challenge” prompt all the more difficult and rewarding.

Alongside installations by the five finalists, Moss and i.materialise used Materialise’s Mammoth Stereolithography 3D printing technology to riff on Warhol’s Self-Portrait (Fright Wig), 1986. Among one of Warhol’s last works, the canvas is hung between two huge 3D interpreted and printed Fright Wigs, one in pink and one in blue. Museum guests are invited to stand beneath the wigs while photographers take “Self-Portraits” with a Polaroid camera. The photos will be given to each “subject” as a memento to the “[v]oyeurism, celebrity, performance, self-examination, and Factory out-put in art.” 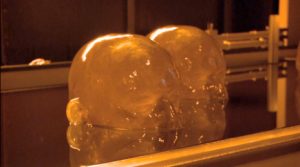 A sneak peak at part of the Four Continents installation by Stephen Jones as it emerges from a Mammoth Stereolithography Machine.

Also on view in the museum’s Time Line Gallery is a piece titled The Four Continents, by renown British milliner Stephen Jones. A piece that acknowledges Warhol as a pioneer of computer-generated art, and in a reaction to the 2009 sale of Warhol’s 1963 canvas, Eight Elvises, which sold for $100 million dollars; Jones, in collaboration with the 3D scanning service sample & hold and Materialise, made four realistic busts of himself that display four Jones-designed head dresses representing either Africa, Asia, Europe or the Americas. In “The Four Continents, Jones, like Warhol, creates a kind of self-portrait in which we understand Jones’ identification with a contemporary global audience‒something Warhol surely sought and most definitely achieved.”

The Andy Warhol Foundation for the Visual Arts, begun in 1987 in accordance with the artist’s will, has a stated mission “to foster innovative artistic expression and the creative process” and is “focused primarily on work of a challenging and often experimental nature.”

Dan Hockenson is a Los Angeles-based writer and tinkerer who enjoys actualizing and thinking on all sorts of physical and mental fabrications. He earned a BA in Art from UC Santa Barbara and an MFA from California Institute of the Arts' Critical Studies Writing Program.