Modelling the Matterhorn with Drones

Afraid of heights but still want to experience the Swiss Alps? senseFly is a Swiss company that uses personal drones to do a lot of amazing things, including mapping and modelling. Drone Adventures, also Swiss, is a non-profit that hopes to show the positive powers of civilian drones.  Together, they used a fleet of little UAVs to map the Matterhorn of the Swiss Alps. And the results are pretty stunning. 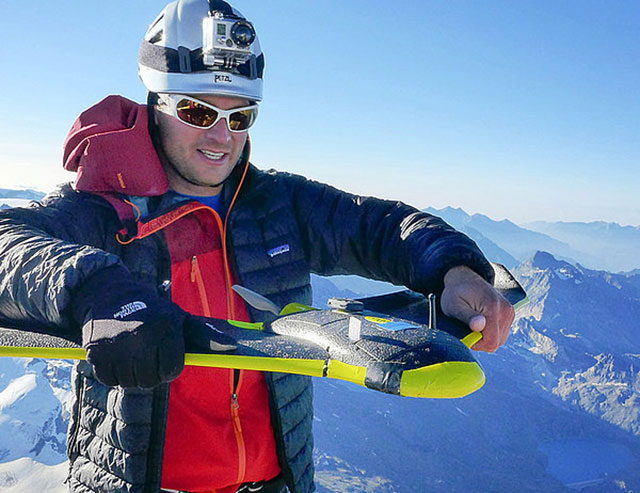 The Drone Adventures team took a gaggle of senseFly’s eBee drones up to the monolithic mountain and began planning. By tracing an outline of a given area on Google Maps and feeding that information into the drones’ navigation systems, they were able to simply program the UAVs to scan a given area. Then, the team split up into two. One group sent their drones flying to capture the base of the Matterhorn, while another climbed up to the summit and did the same, propelling their eBees at a height of 4478 m. After sending the vehicles into the sky, the drones did all of the work, avoiding obstacles, scanning and landing without the assistance of the Drone Adventures team.

In a matter of 5 hours and 40 minutes with 11 different flights covering 263.6km, Drone Adventures was able to capture a 20cm resolution 3D model covering 2800 hectares in 2,188 pictures. Using software developed by senseFly partner, Pix4D, a cloud of 300 million points was generated to create the virtual Matterhorn. For the full adventure, watch the video below:

The eBee is running at about $20k at the moment, so I’m not sure if it can quite be called a civilian drone, but Drone Adventures and senseFly demonstrate the potential that these small UAVs can have for civilian use. Mapping territories can be used for educational purposes, as well as city planning and infrastructure development purposes, as evidenced in Drone Adventure’s project in Haiti.