While many parts of a prosthetic limb can be mass-produced using traditional manufacturing methods, the socket, or the part of the limb that will attach to the amputee’s limb, must be customized for the individual. This is highly skilled work that needs to be done by a well-trained individual. Even in developed nations, the people capable of performing such labour are in short supply; in Uganda, they are almost non-existent. 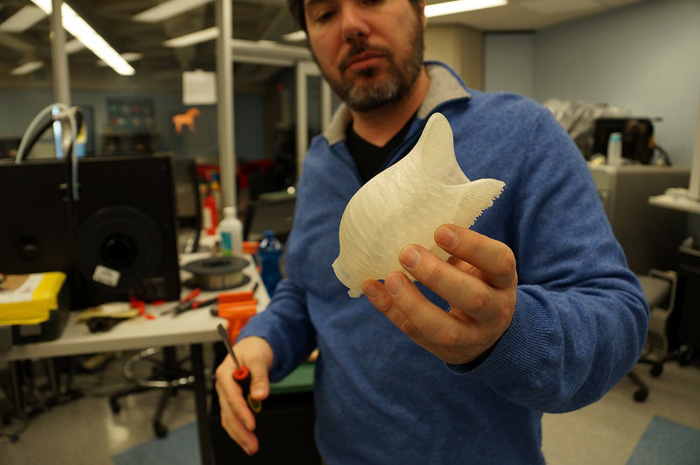 This would be where 3D printing makes things easier, of course. Waiting the weeks, even months, that it typically takes for a custom socket to be made simply isn’t an option for someone in Uganda, where the most needy are often from rural areas and extended stays in the hospital are simply not an option.

The process of making these prosthesis is relatively simple in concept, however Ratto had to figure out how to apply that process to a real world setting with less than ideal conditions. The amputated limb needs to be scanned in a hospital in Uganda. That scan would then need to be sent to another part of the world with technicians who can convert it into a 3D model of the socket. The 3D model would then be sent back to the hospital to be printed. Thanks to modern technology that process can take less than a day, even using entry-level 3D printers and scanners. While the quality of a 3D printed socket isn’t the same, the goal of this program isn’t to replace traditional prosthetic manufacturing, it is to service a need that is currently unable to be met by those traditional manufacturing methods. The choice between no prosthetic and a pretty good prosthetic isn’t really a choice is it?

While the research being done to make this a reality is a good thing, Ratto thinks it raises some interesting questions that deserve to be addressed. Namely, what happens to the digital scans of the patient once the limb is created? Who owns the scan? Who owns the digital model of the socket? How much of an issue is it if the skilled parts of the job happen somewhere other than Uganda?

“As a society, we’ve developed practices that are different digitally and physically,” Ratto says. “But we are starting to lose the separation. Digital and physical modes are getting entangled. That’s something that needs to be thought about. The prosthetics project is an example of how to explore these ideas.”

Here is more from Ratto and the role that 3D printing will play in bringing quality prosthesis to the developing world.