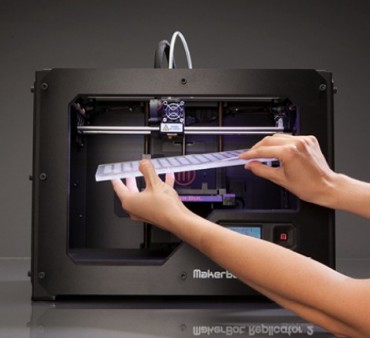 MakerBot has built a reputation as a company that brings affordable, open source 3D printers to the masses, and in particular, the hobbyists that are keen to purchase a kit product and assemble their machines at home. This latest release is a clear shift from that and the new Replicator 2 is aimed at engineers and creative professionals, with its new sleek black metal finish that comes fully assembled, allowing users to print more sophisticated objects. According to the company, users need only lift the Replicator 2 out of the box and plug it in to get started.

The revamped Replicator 2 also includes a software update called MakerWare, which simplifies the act of printing objects for faster and more consistent printing. MakerWare allows you to drag and drop multiple models into a virtual platform, scale them and tweak them individually or simultaneously, before sending them to print. 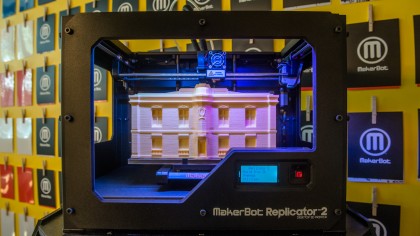 The company has set it self an ambitious target of democratizing desktop manufacturing and competing against mainstream 3D printer manufacturers. The company raised $10 million last year from a group of venture capital companies and angel investors to set the company on this path. This is MakerBot’s big moment — similar to how Apple made desktop publishing mainstream nearly 30 years ago —  and it seems the company is putting down a multimillion dollar wager that 3D printing has hit its mainstream moment.

The Replicator 2 is available now via the company’s website, distributors and the company’s new flagship store in Manhattan for $2,199, with four to six week lead time on deliveries.

There are over 13,000 MakerBot Desktop 3D Printers in use by engineers, designers, researchers, and people who just like to make things. At MakerBot’s website Thingiverse, MakerBot owners can access and contribute to a “universe of things.” More than 28,000 projects, models, and things are available that can be downloaded and printed on a MakerBot Replicator 2 Desktop 3D Printer!