China is a country that is renown for its manufacturing capacity. It is also a country of disproportionately much lower innovation than other economies with large manufacturing output. The cloning of MakerBot’s Replicator 3D printer produced an initial outcry, an ongoing number of replications of the Replicator from China, and a counter-reaction as the leading desktop 3D printer manufacturer MakerBot moved to a closed source format — as a company with staff whose livelihood’s depend upon their profit-making ability. Are there open source good guys and open source bad guys?

These 3D printer clones often claim to be an original design. An initial glance at the design suggests otherwise. Ever since the TangiBot emerged – a cheap imitation of MakerBot’s first Replicator 3D printer – there have been a number of questions that have arisen as to the ethical position of those who take open source designs and make no mention of the originator.

Is this a problem? Is this fair?

Opinions differ. I believe that it is a problem and it isn’t fair. But my opinion is of no more worth than any other 3D printing enthusiast. However, there were high profile names expressing their opinions on the TangiBot Kickstarter page when the first clone was proposed. One voice that proposed that it is not a problem, and it is fair, was Phillip Torrone, the creative director at AdaFruit Industries and Senior Editor at Make magazine. He told Wired magazine at the time: “Being able to copy or ‘clone’ open source and open source hardware (OSHW) is not only OK, it’s celebrated. OSHW has a goal of not only having good designs shared, but the desire to add value to the world when it’s shared and improvements are made.” 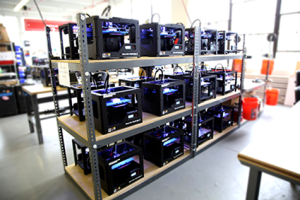 Print-Rite, the company behind yet another MakerBot Replicator clone goes a stage further. The new CoLiDo Desktop 3D Printer appears to use ‘some’ of MakerBot’s hardware and design work, with no mention of that fact at all. Indeed Print-Rite claims quite the opposite, stating that it is a leader in innovation:

’Being the pioneer in the aftermarket printer consumable industry, Print-Rite has demonstrated its leading position by developing the CoLiDoTM Desktop 3D Printer. The printer generates a high precision printout by using a proprietary design print head; the printer is extremely user friendly with low noise, and a competitive price. Print-Rite commits to R&D with in-house production ability on print electronic board, firmware and print head. The printer is also equipped with a proprietary coated glass print table which allows for easy removal of the printed object after printing.’

A company citing themselves as being leaders in 3D printing innovation, whilst using someone else’s open source printer designs, seems like a lot of marketing pretence. It is worth noting that I have no information upon the ‘proprietary design print head and firmware,’ so take it upon default good faith that there is no need to question Print-Rites claim of innovation with these features.

MakerBot has been a genuine catalyst for innovation. The company generally creates great products. I was critical of MakerBot more than once in my writing last year. With the open source ideals of Adrian Bowyer in mind, the seemingly puzzling decisions of MakerBot that year, which often appeared counter-intuitive to the open source 3D printing ideals the founders of MakerBot made their own — but MakerBot seems to have rewritten the rule-book, their success perhaps shows that open source hardware can be used in lucrative ways that still provides high levels of individual, societal and even comparative ecological benefit.

However, for the open source community, a considerable number of voices were raised earlier this year that some of their concerns had come to fruition as an ever growing amount of patents for innovations filed by MakerBot were claimed by open source enthusiasts. MakerBot responded that the patents can be disputed via prior art.

With this complex issue it is not my place to comment. I wasn’t there. I don’t know what happened. I do try to keep up with the opinions of the RepRap community, makers from around the world, industry, commerce and more. There are many differing opinions. Whatever the disputations regarding patents, I do think MakerBot has given a lot. The 3D printing industry certainly wouldn’t be the same without them.

Regarding a perspective upon whether MakerBot is ‘TakerBot,’ or in fact Give-A-Lot, it is said that a picture tells a thousands words…

Creative Commons Licenses are publicised as a good path for those who wish to keep their innovation available for community cross-development. Copyright is copyright, black and white: 3D printers – in terms of machine development or the prints produced – should not be used to breech it. Is the CoLiDo Desktop 3D Printer breaking a law? I don’t know. It’s probably legal. But there seems, to myself at least, to be questions raised when an open source design is repeatadly used by others for profit without thanks or accreditation:

Where does the use of open source create a catalyst for innovation, increase the acceleration of technological development, societal benefit and economic growth?

Where is the misuse of open source merely no better than plagiarism or counterfeiting?

Will the answers to these questions become clearer when Autodesk releases its open patent Spark 3D printer – as an example of open patents in profit making strategies within 3D printing?

Will RepRap and other open source 3D printers in time be viewed as a market enhancing strategy such as that now pursued by Tesla Motors?

So, for myself, a company citing itself as beinga leader in 3D printing innovation, whilst using someone else’s open source printer designs, seems at the very least like just too much marketing pretence. But this example of what seems to be yet another Replicator clone may be an interesting antithesis to the allegations that MakerBot is a company that talks sharing but likes taking.