Attending a couple of 3D printing events directed at the aerospace and defense industries, I heard from Lockheed Martin representatives that had been working with additive manufacturing for some time.  And what they were doing with the technology seemed incredible.  At the AeroDef conference in Long Beach, for instance, engineer Brian Rosenberger described how the company had 3D printed an enormous titanium piece while researching the construction of F-35 jet parts.  The technology it had used to do so was a robotic arm that welds a metallic wire with an electron beam developed by Sciaky, Inc. in Chicago.  I wondered, seeing these presentations, when, if ever, that technology would be available to those outside of Sciaky, Lockheed, Boeing, and the US government.  It turns out that the answer is September 1, 2014. 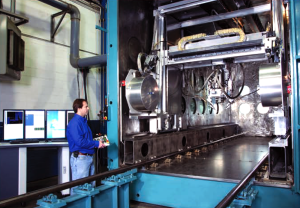 Sciaky’s electron beam additive manufacturing (EBAM) technology, starting this fall, can be purchased by companies wishing to 3D print enormous metal prototypes.  EBAM has a build volume of 19′ x 4′ x 4′ and can 3D print with such metals as titanium, tantalum, stainless steel, and Inconel. The technology involves the use of a fully-articulated electron beam welding gun that converts a CAD model into a 3D printed part at a rate of 7 to 20 lbs/hr, depending on the part’s geometry and the build material.

The company’s general manager, Mike Riesen, says, “Manufacturers, for the first time, will be able to utilize Sciaky’s revolutionary additive manufacturing technology to produce production parts and prototypes in their own facility. The possibilities are endless.”

The company, a subsidiary of Phillips Service Industries (PSI), claims that it can do so with little to no waste, though Rosenberger said in his presentation that Lockheed had created their parts 1/4″ larger than their desired size and would subsequently machine them down to ensure they were built accurately.

Either way, this is big news for the industry as most 3D metal printers are a great deal smaller in size.  The Sciaky system is even larger than the recently covered Efesto machine, which is 4.9’ x 4.9’ x 6.9’ in size.  With the ability to create objects 19 feet long, one can only imagine the sorts of projects that will be undertaken with this monster.