Makerarm Seeks to Fab the Future with Kickstarter Campaign

For many, 3D printing is only one of a number of technologies that will be implemented in a digitally fabricated future.  To augment the additive possibilities of 3D printing, these companies are working to combine a number of processes into one system to 3D print, mill, and laser carve objects in a more complete fabrication process. Hitting Kickstarter today is the Makerarm, which seeks to set itself apart from other hybrid systems through a simple, portable design and an expansive range of fabrication technologies. 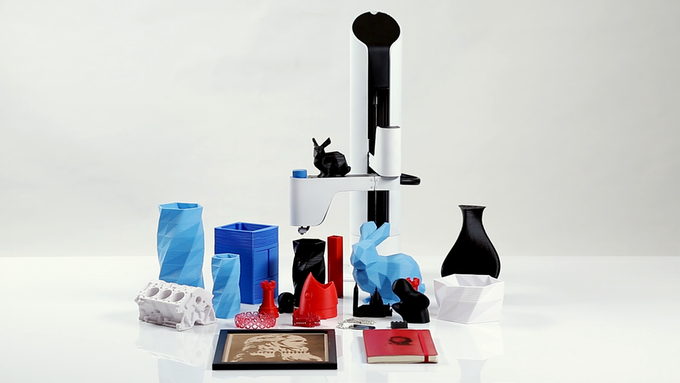 Unveiled at the Bay Area Maker Faire, the Makerarm is exactly as it sounds, but packed with a whole lot more potential than one might first imagine.  The device is a Selective Compliance Assembly Robotic Arm (SCARA) that can be attached to any workbench and, through a series of swappable toolheads, has been designed to perform a number of fabrication processes.  The most relevant to our audience is its ability to 3D print, but not just plastic filaments via FDM.  Because the Makerarm is meant to be able to automatically calibrate for any flat surface, the campaign states that 3D printing can be performed on any flat surface, as well, including slight inclines.  And, on top of that, the Makerarm, according to the campaign, should be able to 3D print with resin, too. 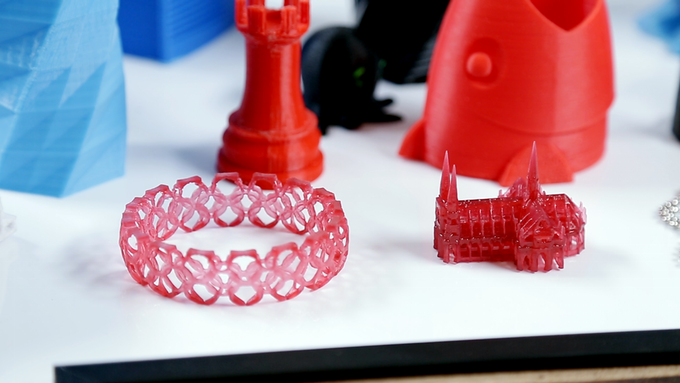 To 3D print with resin, however, a project will be needed, as the designed process would rely on DLP. Makerarm co-founder Zaib Husain, who holds a Bachelors in Finance from UT Austin and a Masters from London University, tells me about this capability, “Makerarm is the first machine capable of 3D printing with both filament and resin. Resin 3D printed parts are remarkable in their detail and can approach the refinement of injection molding. It is incredibly exciting to see a resin part take shape!”  She adds, “Makerarm will work with most DLP projectors of the required resolution. We are currently developing a custom tool head with a built in projector and will be posting an update soon.”  Zaib also provided me with a list of specs regarding the DLP 3D printing capabilities:

In addition to 3D printing, the Makerarm has a light-duty, high-speed milling head for carving plastics, wood, and soft metals.  A 500mW, 405nm laserhead adds the ability to engrave and etch plastic, wood, leather, cardboard, and more.  When used to etch PCBs, the Makerarm has additional toolheads for complete desktop circuitboard creation.  The campaign says that, with successful funding, the team hopes to create pick-and-place toolheads that use one of the following to allow for the precise placement of electronic components: vacuum pump-coupled suction cups, electromagnetic heads, or grippers. The campaign even references a soldering head and screwdriver head for completing such custom circuits.  Finally, a proposed hardware development kit (HDK) is meant to allow advanced users to create their own custom toolheads.

Due to its SCARA design, the Makerarm has a reach of 15.7 inches long, 31.4 inches wide, and 10 inches wide, making it one of the largest desktop 3D printers out there. While it has 3-axis motion, the campaign says that it can be expanded to have 4-axis motion, as well. Moreover, browser-based Makerarm.io software, in development, not only controls the device via Wi-Fi, but should, if the team can pull it off, allow users to even train their robotic arms.  According to the campaign, the Makerarm can then be paired with subsequent arms for even more complex projects, virtually allowing for a completely automated factory. 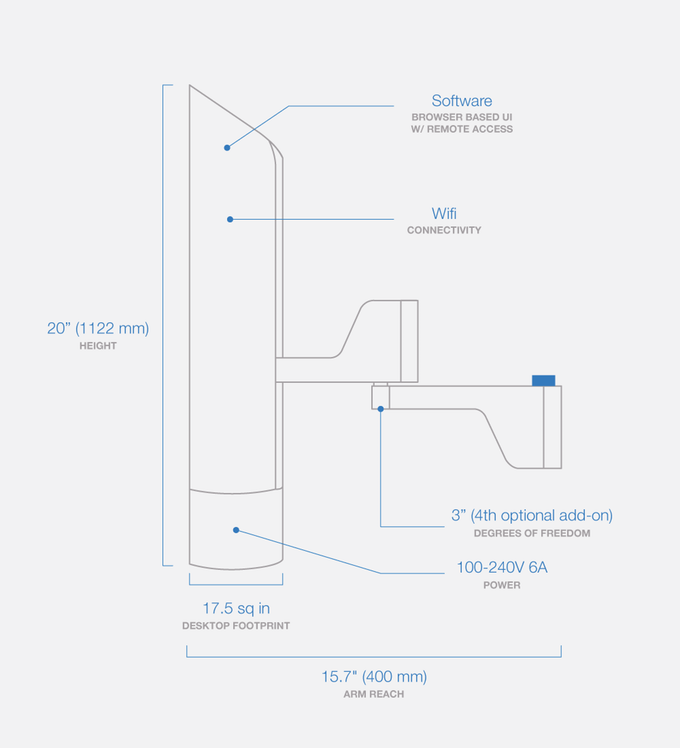 Altogether, this makes the Makerarm one of the most flexible and capable desktop hybrid machine yet designed.  In the past, crowdfunding campaigns may fail to fulfill their goals, either by not meeting their Kickstarter funding deadline or by failing to produce a product. For instance, here, it’s difficult to discern whether or not the footage in the sleek pitch video shows the actual Makerarm exploiting its various abilities, or if this is a demonstration of what the eventual Makerarm will be capable of.  I’m not an engineer, but, based on previous systems covered on 3DPI, I don’t see a reason why most of these functions shouldn’t be possible, though I’m still wondering about how the DLP process function works. 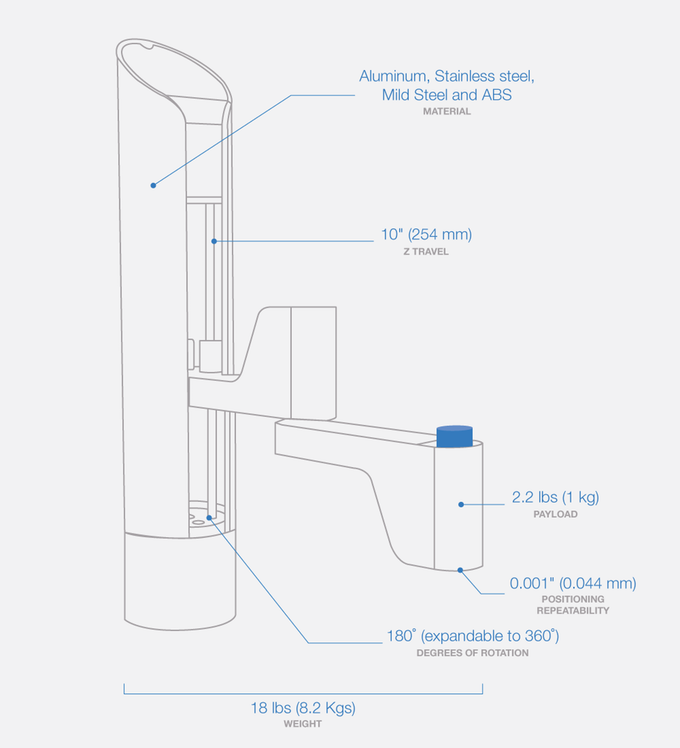 Countering potential skepticism, however, the Makerarm team is making significant strides to assure confidence in the Kickstarter community.  The team itself is made up of a finance specialist, Zaib Husain; engineer, Azam Shahani; and designer, Josh Harris.  But to boost the credibility of the product, Makerarm has reached out to Dragon Innovation, a manufacturing consultancy that has worked with such companies as Pebble and iRobot.

Partnering with Dragon Innovation to validate that the project can be completed on time and within budget, Makerarm says on their campaign page, “The Dragon team has thoroughly reviewed Makerarm’s design for manufacturing (DFMA), BOM (Bill of Materials) and the production plan and have given us their seal of approval that the project is ready for Kickstarter. Our target ship date for the retail unit is Fall 2016.” To further ensure the campaign’s success, Makerarm has partnered with Vann Alexandra, a creative services agency that boasts a 100% success rate for the projects that it has served. 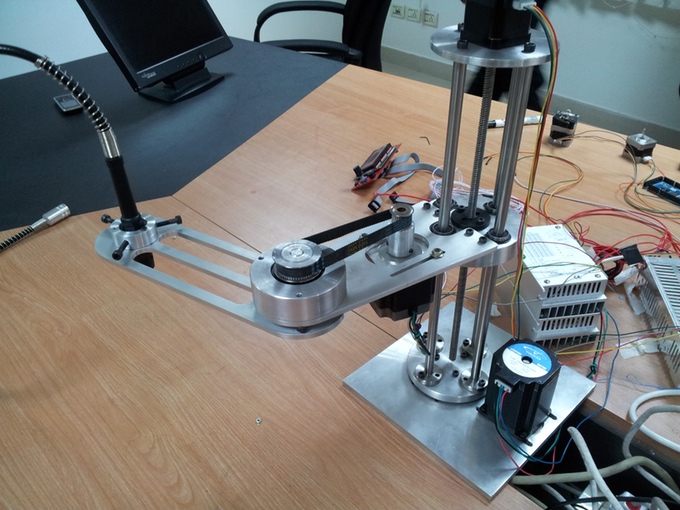 More importantly than any of this, though, is the fact that Makerarm has created “three fully working prototypes that are undergoing internal testing,” designed with their manufacturing partners in China.  The campaign says that the team has spent weeks at the facility to manage the supply chain and logistics, so that the factory is ready to begin production upon funding.

Before full-scale manufacturing takes place, the Makerarm team is beginning with its beta tester program, seeing Kickstarter backers receive their units in April of next year to test out the machines and provide feedback for further improvement. To become one of these beta testers, you can back the campaign now.  Starting at the super early bird price of $999 and moving up to the standard price of $1,399, backers will receive a Makerarm plus a toolhead of their choice and a “Head Pack”, consisting of a universal tool head, electromagnet pick and place, and a pen plotter.  Subsequent awards see the number of toolheads increase with increased financial contribution and all backers receive a one year licenses for Autodesk’s Fusion 360 design software. 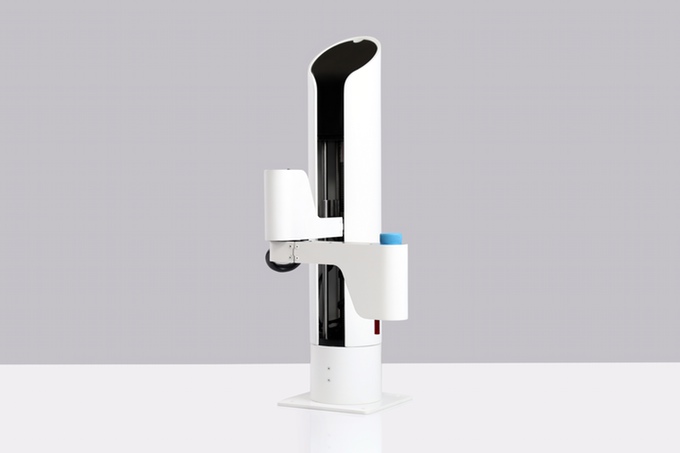 As with many Kickstarters, this one promises a lot, but, if the makers of the Makerarm can deliver on those promises, the device could be as revolutionary as desktop 3D printing itself. And, given the partners mentioned, it’s quite possible that the Makerarm really can deliver.  Head over to their Kickstarter page here to learn more or to support the campaign.