In May, 3DPI covered an open source projector-based resin 3D printer that aimed to hit Kickstarter with an opening price tag of less than $500.  This morning, the LittleRP did just that and, before I could even post about it, the machine had blown past its crowdfunding goal of $20,000 by more than half.  At the time of this writing, the campaign has sold out of its early bird kit (without projector) priced at $449 and the backing continues to rise.

If the LittleRP name is throwing you off, you may remember it by its former name, Little DLPer.  Due to fears surrounding patents, the printer’s creator, Brad Hill, has changed the name of his project, but the LittleRP seems to use the same technology and open source design.  The machine throws light from a projector onto a vat of UV-curable resin, hardening each layer as the print is slowly lifted into the air.  For $999, backers can receive the complete kit, along with a projector.  Though this version will give you a high-quality Acer projector, it’s also possible to purchase a used projector somewhere to complete a less costly, projectorless kit. 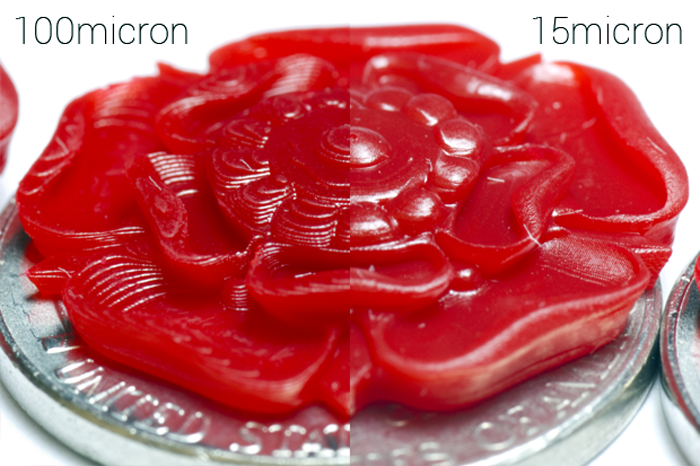 Light-based printers are capable of producing much higher resolution prints than their filament-based counterparts and the LittleRP has been proven to work with a number of resins on the market.  Using Envisonetc software, the device can create prints as detailed as 15 microns with a print area between 60x40x100mm and 72x40x100mm, depending on the projector used.

As the campaign is already funded, Brad Hill and his team hope to include a tilting vat upgrade, which allows users to create larger or more solid models, with a wider range of resins, as it reduces issues when peeling prints off of the build surface. With this tilting mechanism making prints easier to remove, the project creators believe that users will be able to fill a larger portion of the build area with cured resin.  You can see the bed tilting process in the .gif to the left.

In addition to the new feature, the campaign will help the team order parts in bulk, purchase new projectors and resins for testing purposes, and develop a community of users that can work together to improve the LittleRP.  From the print resolution and the price, I’d be hard pressed not to buy one myself, if it weren’t for the fact that I’m nearing on broke.

For more info on the project, visit the Kickstarter page and/or watch the campaign video below: