Kickstarter: Learning to be a Maker – The Book

Even though the maker movement has grown significantly in numbers during the last few years, for some it might still come across as an impenetrable esoteric sub-society of eccentric engineers – a sort of a skull & bones for the people wearing propeller hats. David Lang used to be one of those people far outside the core maker circles – just a regular 9-5er sitting in his cubicle, until the quarter-economy caused him to lose his job in the summer of 2011. After the forced career move and some soul searching David chose to take this incident and turn it into a positive. He decided to go out and start exploring new sides of himself – and if he could portray himself as a hands-on maker instead of just a regular passenger dreaming about reaching over the wheel.

After studying traditional ways of crafting and creating, the newer machines on the block came into the picture – amongst others CNC mills, laser cutters and – of course – 3D printers. The endless possibilities combined with the welcoming atmosphere of his local maker community were enough to turn David into following a completely new path in life.

From this transformation process of unveiling new layers of himself in only a year and also the hidden potential within all of us, David came up with the idea to publish a book about the coming of maker-age process. Watch his pledge on Kickstarter below – even if for the pure enjoyment of observing a person surrounded with such a strong aura of passion and positivity. 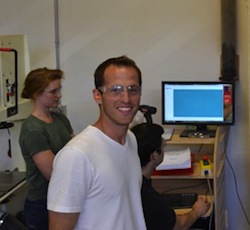 “This maker movement is not about DIY, it’s about DIT – Do It Together” – David Lang

With three weeks pledging time to go, the people around the world seem to grasp  David’s ideas about this new paradigm of creating through sharing ideas, information as well as the actual manufacturing equipment – his initial pledge goal of $2,500 has been already been topped with $10,000.

Therefore the Zero to Maker book will be written and live interviews will broadcasted via Google+ Hangouts together with introductory hands-on crash courses into the approachable art of making – check the source link for more detailed information on these topics.

I personally salute this man for what he’s doing. By stripping away the unneeded mysticism around the paradigm of making, David is doing a priceless favor – not just for the maker community, but also for the entire field of 3D printing.