Although there have been significant recent developments in the 3D scanning field – such as the Go!Scan handheld scanner – choosing from the current variety of models — that are on sale today — has inevitably resulted in ticking at least one of the following boxes: unmanageable size, engineer-level set-up/calibration or a sky-high cost. From the need to change this,  CADScan3D has emerged — a 3D scanner, obviously, that is aiming to be both easy to use and affordable – and also to fit on your desk.

CADScan 3D, from UK-based company CADScan, should be as easy to use as a printer with one dimension less – i.e. simply placing the object in the machine, pressing a button and then patiently waiting for the result – “a fully aligned and meshed colour point cloud”, according to the company. 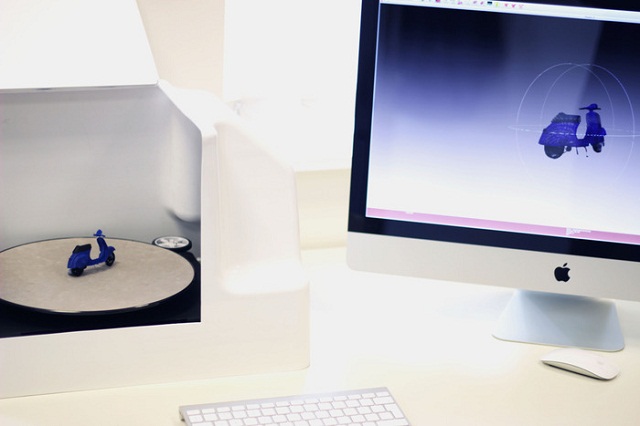 On a more technical note, the scanner is compatible with most CAD packages and 3D printers and produces results as .STl, .OBJ or .PLY files. As for the scannable size, CADScan 3D can work with objects up to 250 mm x 250 mm x 250 mm in size (roughly 10 inches cubed) with a resolution of up to 0.2 mm.

But what about the bottom line – the cost – is it really a low-cost option that does everything it says it can? Well, as with all Kickstarter projects, if and when the CADScan 3D secures funding and eventually hits the global market, the retail prices might not be what they were initially intended to be. However, a good indication and presumption could be based on the Kickstarter’s pledging stages: a healthy £599 ($929) will eventually land you the complete set, including shipping and taxes. Other pledge levels for the all-in kits go all the way up to a thousand Sterling for some more special versions. This is of course with the condition that the pledge goal will be reached – with ~£18k ($28k) pledged so far out of their £80,000 ($124,000) goal.

Estimated delivery for the £599 model – the “Early Backer Special” – is scheduled for September of this year.

If this sounds worthy of your hard earned money, there’s still plenty of time to participate – the CADScan Kickstarter campaign will end on March 19th. You can watch the pledge video below.