Juno has taken a small step for 3D printing, as well as a giant leap for mankind, with its successful entry of Jupiter’s atmosphere.

The craft is the first in space to feature 3D printed parts. They might just be titanium waveguide brackets, which is a minor contribution in the grand scheme of things. But actually relying on 3D printed parts rather than simply testing them is a seismic shift. The whole industry, then, will watch Juno with trepidation and excitement.

Entry into Jupiter’s atmosphere is one of the most brutal tests of 3D printed parts we could physically conceive and a probe that entered in 2012 lasted all of 78 minutes before it was destroyed by the massive temperature, pressure and radiation. Juno took an equivalent of 1 million dental x-rays on entry, according to one report, which is an impressive statistic on its own.

More titanium was used as a part of an extravagant shield. Juno will use solar panels to generate power while in orbit, so every part of the satellite required careful engineering for strength and durability. This is a seriously harsh environment and a real test at every step.

The satellite left Earth five years ago and successful entry into Jupiter’s atmosphere rested on a rocket firing and acting as a brake to slow the satellite’s entry and prevent a massive build-up of heat that would eventually destroy it. This whole mission, years of work and millions of dollars, came down to a few crucial moments.

A musical signal of success

A series of tones transmitted by the satellite back to NASA’s Jet Propulsion Laboratory in Pasadena. That was the signal that everything had gone to plan, indeed the initial calculation were out by just one second. Juno was the wife of Jupiter according to the ancient mythology and, so far, the planet has been kinder to the probe that bears his wife’s name.

“Nasa did it again,” said an elated Scott Bolton, Juno’s principal investigator. “That says it all to me. And I’m so happy to be part of the team that did that. I mean this team has worked so hard and we have such great people. And it’s almost like a dream coming true right here.”

Now that the satellite is in orbit, the team will prepare the satellite for a second burn that will bring it into even closer contact with the surface and reduce the orbit time to just 14 days. 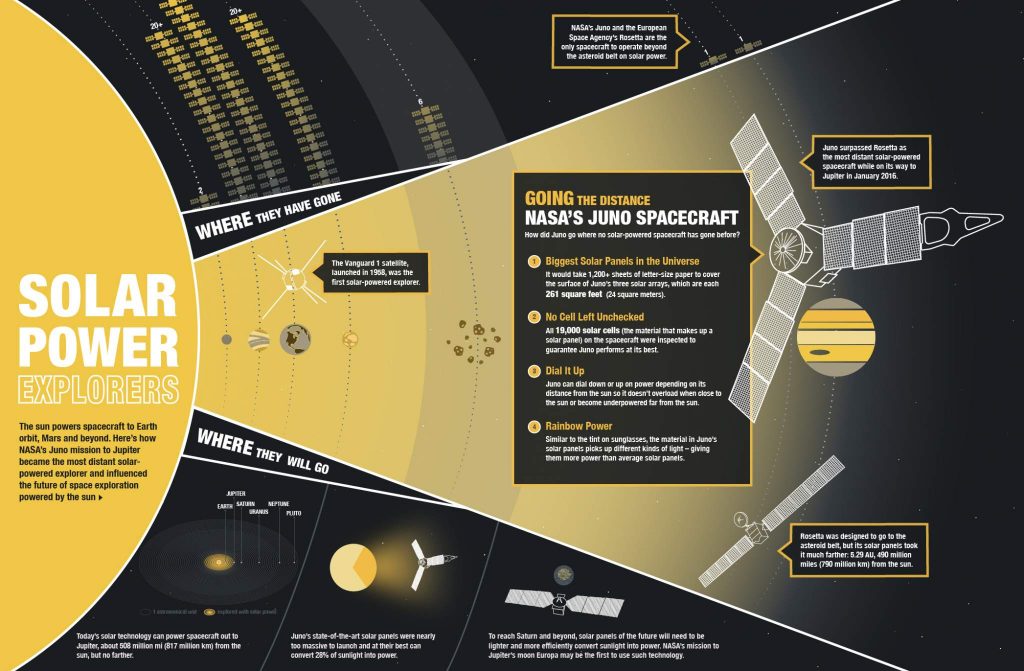 What is Juno looking for?

Once it’s closer to the surface, the satellite can provide higher resolution images of the surface and more accurate information, which scientists hope will provide some of the answers to the origins of the universe.

The Oxygen content is one of the burning questions as figuring this out will give NASA a real indication of when exactly Jupiter was formed. The satellite is also looking for flowing water and signs of life.

It is a brutal and ongoing stress test for the Juno satellite itself, including the 3D printed titanium parts. Jupiter is closer to a star than a traditional planet. It is volatile, it is made up mostly of Hydrogen and Helium and has a strong magnetic field. It’s 11 times wider than the Earth and it is an exceptional proving ground for these parts from Lockheed Martin.

The future of 3D printing in space

This is hardly a make or break for 3D printing. NASA is already fully on board and has produced a new and more efficient turbopump with additive manufacturing. Space X also 3D prints parts and we are homing in on fully 3D printed rockets. Made in Space has a permanent installation on the International Space Station and, closer to Earth, GE Aviation and Airbus have embraced the technology.

So this mission is not an audition for 3D printed parts, but still it would have been a major blow if a five-year plan had fallen apart in the dying seconds because the 3D printed titanium parts didn’t hold up. So far there’s no sign of that happening, but it won’t just be NASA keeping a close eye on those waveguide brackets.

The whole 3D printing industry, and many more besides, will be watching.