Space and technology have collided in a recent design challenge hosted by Star Trek and NASA. Future Engineers has once again called upon students to push their creative boundaries. Since February 2016, they have been working hard to engineer 3D printable design concepts aimed at food sustainability in space. More than 400 students from 30 US states created amazing solutions that would aid astronauts in harvesting, preparing, eating and disposing of food while on long-duration space missions. A panel of judges from NASA, the American Society of Mechanical Engineers (ASME) Foundation, and Made In Space, Inc. selected Kyle Corrette from Phoenix, Arizona and Sreyash Sola from Asburn, Virginia as winners of their respective Teen Group and Junior Group. Judges also selected three finalists from each group, who were each awarded a MakerBot Replicator Mini Compact 3D printer for their school and a PancakeBot for their household. Winners Corrette and Sola received a grand prize trip to New York City for a private viewing of the Space Shuttle Enterprise with astronaut Mike Massimino at the Intrepid Sea, Air and Space Museum, as well as a VIP tour of MakerBot’s headquarters in Brooklyn, New York.

Read more about each finalist’s innovative design concept below: 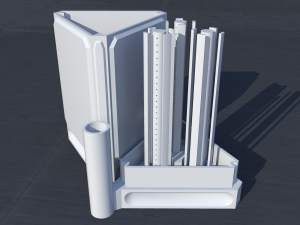 The Melanized Fungarium features an outer shell, housings for an organic growth bed, and an irrigation system. It relies on radioactivity as a source of energy, allowing the fungi to be used as a renewable food source in space. Because it is intended to be used in microgravity, Corrette suggests printing this design with a waterproof, low-warp plastic, such as Colorfabb XT. 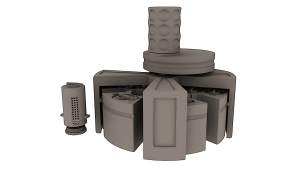 The Spirulina uses a hand-cranked centrifuge to separate fresh algae from a growing solution, which is cultivated under LED lights in six translucent inner containers. These containers can also be removed and used to make a nutrient-enriched juice. This design is to be created on a dual-extension printer, capable of printing with both HIPS and a translucent, food-safe ABS filament.

The Muli Purpose Mug combines the functions of a beverage cup, measuring cup and watering can all in one handy container. The mug is double insulated in order to hold hot and cold beverages and features a strainer, a pour spout (which doubles as a straw), and a transparent section for accurately measuring liquids. This project is meant to be printed with a food-safe, high temperature rated material, such as PETG. 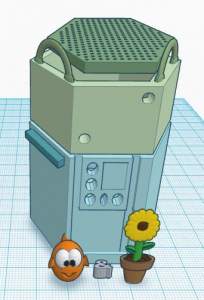 Intended for use in microgravity environments like Mars, the CAP System is a hydroponics and aquaponics system used to grow vegetation. It features a water pump powered through kinetic energy, as well as inputs for an O2 probe and pump, and a CO2 probe. In order to ensure its beneficial gas exchange, this project is intended to be printed with PFTE.

The Astro Mini Farm uses a magnifying glass to bring sunlight directly to plants grown on Mars, which receives less sunlight that Earth. The project can also sustain an added pump which would periodically pressurize the container to about 1/10th the pressure of Earth in order to compensate for Mars’ thin atmosphere. The Mini Farm does not require electricity, making it ideal for 3D printing with soft glass or transparent material extracted from Martian soil.

Printed with translucent filament, the Bioreactor grows spirulina algae and filters it into a tea. The design components can be arranged differently for different functions ranging from harvesting to brewing to serving. The project also features decorative designs inspired by traditional Japanese nature patterns, in order to create a sense of earthly comfort in space 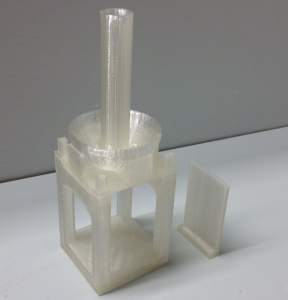 The Water Condenser was created to combat the issue of water’s weight and density in space. Using the laws of thermodynamics, specifically condensation, water is to be collected into a cup placed in a designated spot. This project can be printed with metal or plastic and is especially intended for use on hotter planets. 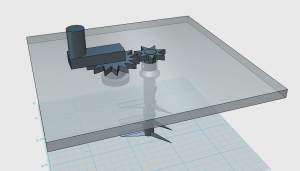 The EZ Blender features is a manual crank mechanism that can be placed on top of any container. Aside from mixing and chopping foods, the EZ Blender can also mix soils and fertilizers for planting purposes. The 3D printed version of this project can be disassembled, making it a crucial space-saving device on board a space craft.