Mike Ayre is a product design, innovation and manufacturing consultant and runs his own industrial design company, Crucible, based in Abingdon, Oxfordshire. Mike has long been a proponent of 3D printing and additive manufacturing technologies. But when it comes to the realities of what these technologies can do and how they can be integrated into successful working practices, he is one of the most grounded people. Crucible is also part of a collaboration called The SAVING project, and in this interview with 3DPI he offers some insight on it here for our audience.

3D Printing Industry: Can you tell us a little bit about your background, specifically with 3D printing / AM Technologies. When did you first become familiar with the tech and how did you apply it? 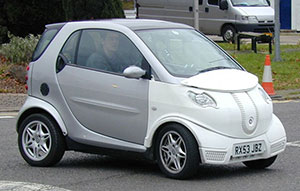 Mike Ayre:  I’ve been aware of AM technologies since I began working as a design consultant in the UK in 1990, following ten years working abroad. I met Tim Plunkett around that time, just as he was setting up Formation, and we have worked together ever since on a wide range of AM technologies. Most of my early work with AM techniques was using SLS parts made by 3TRPD in Newbury. These were often functional prototypes for product development projects such as door locks and speed camera detectors. Towards the end of Tim’s time at 3T, however, we got involved in more experimental work. One example was a collaborative project to scan, redesign and make an entire front end moulding for a Smart car, using Solidworks as the modeling tool and multiple SLS parts joined together to create the large component that made up the new front end. The result was driven for many thousands of miles to prove the durability of the design, the material itself and process used to join it.

3D Printing Industry: For the benefit of the 3DPI audience, tell us your true opinion of AM and what it can – and CAN NOT – do.

Mike Ayre:  The process of building parts in layers –which is what most AM processes come down to – provides enormous technical and creative freedom, as it obviates the need for boring things like tooling. This freedom opens up some very exciting opportunities to produce geometry that looks virtually impossible, and also solves some important technical issues, like the production of curved internal cooling paths that improve efficiency in mould tools. Given the absence of tooling, AM can also be used to produce large numbers of parts in one go that are all different from each other, which has been used to great effect on the production of customised hearing aid bodies and dental copings.

The enormous enthusiasm that greeted the discovery of these – very exciting – abilities tended to smother some other – less exciting – facts.

First, claims that the absence of tooling equated to the end of rules governing Design for Manufacture and Assembly (DFMA) were grossly exaggerated – to the point where claims were made that AM spelt the end of conventional manufacture and the dawn of a ‘third industrial revolution’. The hyperbole that surrounds these claims ignores the fact that all production processes have limitations, and some AM processes, like metal sintering, have many, particularly if you take time and waste into consideration. The orientation of parts in a build chamber; their size; the wall sections involved; the need for support structures in some processes – these are just some of the issues that can affect the viability – and consistency – of AM parts.

Cost is the second issue. Claims that AM parts cost the same as their conventionally manufactured alternatives are quite commonplace, and almost always wrong. The simple fact is that the cost of AM parts is almost entirely dependent on the material used and the size of the part. If you can make 300 customised pen caps in one production cycle, each one will be cheap, but if the same build chamber can only accommodate one lampshade, it won’t be. Obvious? I agree, but it is all too often ignored.

Finally, there is the – potentially thorny – issue of design and manufacturing expertise. Personally, I was brought up with the concept that ‘everyone is a designer’, so I don’t have a problem with people creating and producing their own products. The tricky bit is who decides what the right material is, and whether the 3D printed crampon you’ve just made will support your weight when you go climbing next weekend?

The bottom line for me is that AM/3D printing is a collection of very exciting technologies that are still in the ‘excessive expectations’ phase of the hype curve. I am looking forward to getting through the ‘disillusion’ phase and into the – genuinely exciting – final phase of ‘realistic implementation’.

3D Printing Industry: Appreciating that you probably can’t name names, can you tell us about the sorts of companies that you work with, notably those utilising AM.

Mike Ayre:  Many of the companies we work with are technically led businesses that recognize that design is a vital component in differentiating their product, and that appearance and ease of use can make a huge difference to profitability in competitive markets.  The ability of designers to advise on the best manufacturing methods and the whole process of new product development is less well understood, but we’re working on it. Our interest in new manufacturing methods is based on delivering the most cost-effective solutions for our clients. AM techniques can make a huge contribution to this, not least in minimizing development risk and allowing the client to see and touch a ‘real one’ before anything is invested in tooling.

I know this may not go down too well in AM circles, but we’ve been using ‘SM’ (subtractive manufacturing) techniques for some of our recent prototypes. Working with Plunkett Associates, we’ve been able to get prototypes machined from solid ABS and painted for less than the cost of an equivalent AM unfinished part. It is an interesting reminder that the rest of industry is not standing still – and that conventional methods can, in some circumstances, compete very well with the new technologies.

3D Printing Industry: From your experience, which industrial sectors do you think currently benefit most from AM and why.

Mike Ayre:  The clear favourites are aerospace, motor racing and medical, because the first two have huge budgets and cost is not a critical factor in the third. I think these areas will continue to be the primary industrial sectors that use AM technologies, but there is also a massive amount of growth at the opposite end of the market – what some people are calling the ‘self-manufactured tat’ that can be produced using a small FDM 3D printer. It was certainly interesting to go to TCT last year and see numerous stands with brightly coloured ‘dungeons and dragons’ models in between those showing titanium F1 suspension components.

One of the most exciting areas is the growth of sites where CAD data can be uploaded and other people can then use it to make the part at home. Controversy about 3D printed guns aside, this is an exciting development, not least as it means that spare parts could be produced locally.

3D Printing Industry: Are there currently any areas where AM is not being applied that you think would be a good fit?

Mike Ayre:  Picking up on the previous point, the ability to make parts locally or domestically could make a big difference to developing countries, particularly as many of them now have good web access. I spent ten years designing locally developed and sourced products in Africa and Asia, based on the fact that imported products often failed – permanently – when they needed a new part. AM techniques could address this problem for many small, vital components for products like pumps and generators.

3D Printing Industry: You were involved in The SAVING Project – can you tell us about the origins and aims of this collaborative venture?

Mike Ayre:  SAVING stands for Sustainable product development via design optimisation and additive manufacturing. The project was a TSB funded consortium established by Exeter University and included staff from Crucible, Plunkett Associates, EOS, 3TRPD, Delcam and SimpleWare. The overall purpose of the project was to explore how AM techniques could be used and optimised to reduce CO2 emissions.

The project had two main areas of research – the development of complex lattice structures that could be used inside products to minimise their weight whilst not compromising performance, and the identification, development and optimisation of parts that could be made using AM techniques to reduce energy use.

3D Printing Industry: As far as you can share, what has come out of the project and will it continue?

Mike Ayre:  The key issues that came out of the SAVING project for us were that metal sintered parts have to be designed very carefully to limit waste by  minimising the need for supports and their removal; and that the environmental benefits of AM parts have to be considered in the long term. AM parts are – at the moment – expensive to make, both in terms of cost and environmental impact. However, if a part can be used to make even very small improvements to the weight of an aircraft, or the hydraulic performance of a pump, the long term benefits can be dramatic.

Fuel consumption – and therefore weight – is one of the main concerns for automotive and aerospace designers at the moment, and I’m sure that AM techniques will continue to have a lot to offer in this important area.

3D Printing Industry: From your perspective, what do you think the AM/3D printing headlines will be in 10 years time?

Mike Ayre:  I’m fairly convinced that 3D printing will be like texting – we will end up with a number of unintended consequences (like bright yellow dragons and goblins) that aren’t necessarily bad – just not what we expected.

Personally, I would love to see AM generate a digital industrial revolution in Africa, allowing people to develop products that meet local needs and express their creativity using modern methods and tools.

I would also like to see more development in the recycling of 3D printed parts that is offered by products like the ‘Filabot’. The last thing we need is yet more plastic rubbish, so a means of recycling old models and failed prototypes would be both good for the environment and also make parts cheaper to make.

Will we all be designing our own electric toothbrushes and making them using our home ‘replicator’? I don’t think so. Most products are assemblies of electronics and mechanics that have a complex relationship with the outer skin of the product. Replacing it is not trivial. What does seem more likely is that AM will allow a new generation of ‘designer/makers’ to produce their own products that are highly individual or customised. It would be slightly ironic if AM creates a revolution in craft, not industry.