This past weekend, the 3D printing maker community was alive with activity for Global 3D Printing Day. After taking to twitter, Youtube, and good old email 3DPI decided to round up some of the best projects we’ve seen for 3rd December (3D, get it?!) 2016, including a robot arm, a zoo, Kirby and a 3D Printmas miracle.

Graphic designer Don ‘The Diagram Guy’ Foley got in touch with us to share his 3D print of Fort Manzas, a national monument in St. Augustine, Florida. Foley was originally asked by the National Park Service to create an illustration of the fort. After a sailing trip with his family, he was inspired to create a full 3D model of the port, complete with canons, which can be seen below. It was printed in Ultimate3D PLA filament, on a Wanhao Duplicator 6.

The latest trend in 3D printing is Makers creating animals to populate a #3DBlockZoo. The idea was first conceived by Australian Youtuber SparkyFace5, and #3DPinkMafia founder ddhedder on Twitter (who we’ll have more about later in the article). Under her SparkyFace5 alias, Tessa Nesci put out a call-to-action on Youtube for people to use Tinkercad to help populate a #3Dprintzoo.

Either Nesci’s enthusiasm, the simplicity of the challenge, or a love for animals has since inspired people to get involved as Twitter saw a surge of new 3D block animals over the weekend. The challenge also caught the attention of Jwall from Print That Thing who livestreamed making a block monkey.

As promised, the #3Dpinkmafia community was also busy over the weekend, and our clear favourite was the Kirby printed by A Pyro Design. Smash that Nintendo.

Artist and teacher Christopher Sweeney shared with us the chess set created by his students at the Pennsylvania Art Education Association. Each highly-detailed piece was printed in ColorFabb bronzeFILL metal filament as part of a community projects. 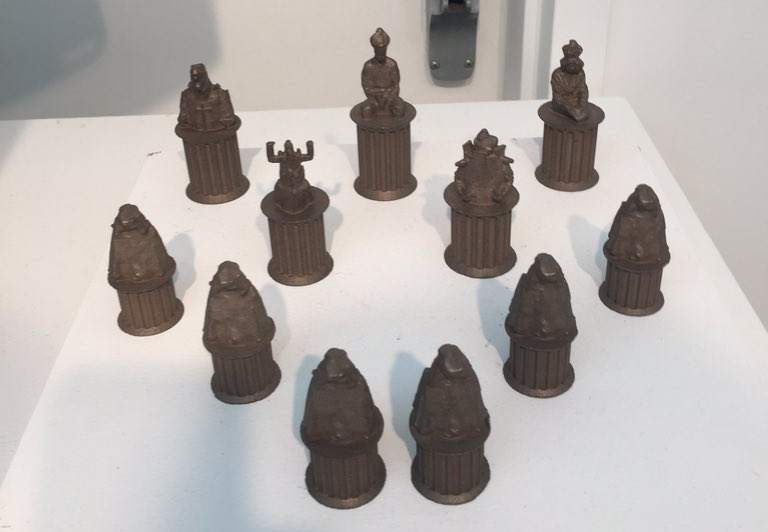 Sweeney has also been recently involved in replicating artefacts held at the Penn Museum.

Meanwhile at the Department of Mechanical Engineering, VA…

There couldn’t have been a better day for Virginia Tech DREAMS Lab unveil their 10-foot-tall 3D printing robotic arm. Operating on 6-degrees-of-freedom, the arm is seen below quite conservatively working on a geometric bowl (this was just a test, we’re staying tuned for bigger prints).

Whatever you did on 3rd December we hope you had a blast! We’re looking forward to more of the same again next year, when we hope there’ll be cards complete with greetings such as ‘May your prints be spaghetti-free and water-tight’ and ‘All I want for Christmas, is a new spool’. (We’re working on it)

Featured image shows a block puppy, elephant and penguin, designed and printed by Tessa Nesci Photo via: SparkyFace5 on Thingiverse